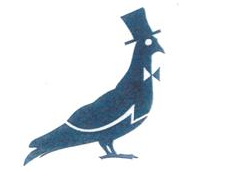 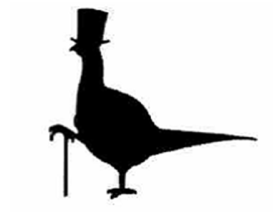 This decision is an interesting example of the assessment of likelihood of confusion in respect of two purely figurative marks, and contains helpful observations on the definition of the 'average consumer' and the evidential requirements in establishing unfair advantage.

Jack Wills is a successful UK clothing brand, targeting primarily affluent 16 to 24-year olds. It has been described as the British response to Abercrombie & Fitch minus the scantily-clad, model-like shop assistants, and with more generously lit stores. Its British heritage is reflected in its logo (known as 'Mr Wills'), which represents the silhouette of a pheasant (a bird traditionally associated with shooting and hunting parties) with a top hat and a cane.

Jack Wills uses three versions of Mr Wills, the one above being the simplest of the three, which is protected by UK and Community trademark registrations including in Class 25 (clothing, footwear and headgear) of the Nice Classification.

House of Fraser is a renowned department store operator, which also sells its own range of men’s clothing under the brand Linea. Between 2011 and 2013, House of Fraser used the above logo (ie, the silhouette of a pigeon with a top had and a bow-tie) in relation to a selection of Linea items, including on tags attached to or embroidered on the garments.

Arnold J agreed with Jack Wills and held that:

When assessing the similarity of purely figurative marks, the relevant comparisons will be visual and conceptual. In this case, the judge gave particular emphasis to the high degree of conceptual similarity.

Bearing in mind that the average consumer rarely has a chance to make a direct comparison between marks but has to rely on his/her imperfect recollection, the judge found the marks to have a reasonable degree of visual similarity, despite their differences.

Conceptually, both logos consisted of silhouettes of anthropomorphic birds, characterised by the “accoutrements suggestive of an English gentlemen”. Whilst conceptually a pheasant is different from a pigeon, this was less significant than the fact that both birds were wearing a top hat. Therefore, the degree of conceptual similarity was high.

Mr Wills’ anthropomorphic nature and human accessories were important factors in Mr Wills’ distinctive character (also when compared with other clothing brands using bird logos, such as Armani, Hollister and American Eagle). The use of the same distinctive conceptual features in House of Fraser’s mark brought the two marks closer.

Further, Arnold J considered the issue of the identity of the average consumer when:

The judge noted that the average consumer is a legal construct providing “a normative benchmark with regard to the standard of perspicacity to be applied”, but the court is not required to assume that all persons will perceive the mark in the same way. Equally, depending on the goods and services in question, the demographic profile of consumers “may vary widely in age and socio-economic class”.

Therefore, the fact that a mark has acquired distinctive character amongst one section of the relevant public will be a factor increasing the likelihood of confusion amongst that section of the public, but it does not mean that only that group will be representative of the average consumer. Similarly, where a demographic segment is more likely to encounter the mark, this will be taken into account when assessing the likelihood of confusion, but it does not mean that one should concentrate only on that segment. Accordingly, the judge rejected Jack Wills’ argument that there were two average consumers (ie, those who purchase clothes for their own use and those who purchase clothes for others).

The judge was also asked whether there was a requirement for evidence of a change in economic behaviour of consumers (or a serious likelihood of such change) in order to establish the taking of unfair advantage of the repute of the earlier mark. The relevant consumers in question were those of the defendant’s goods and services (ie, House of Fraser).

By analogy with the Court of Justice of the European Union’s decision in Environmental Manufacturing LLP v OHIM (Case C-383/12), Arnold J held that there is no requirement to adduce actual evidence that consumers had changed their behaviour as a result of the use of the pigeon logo. It was sufficient to make logical deductions, providing that they were not the result of mere supposition and took account of the normal practice in the relevant commercial sector.