Trademarks in space: how to future-proof off-world brands 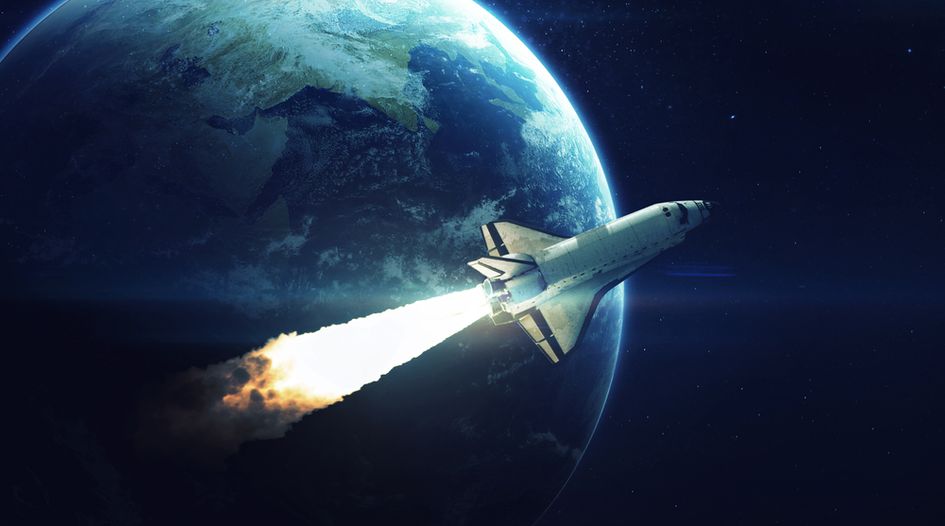 With space exploration travelling further than ever before and celestial vacations on the horizon, now is the time to consider how to protect brands off-world. Clark W Lackert and Jonathan Goodwill of Carlton Fields analyse existing earth legislation and explore options that might apply.

Trademarks in the cosmos have been debated for decades but nothing has been done. However, with multiple countries now travelling into outer space and Earth-orbit hotels, together with moon and Mars cities, planned for the near future, a trademark regulatory structure needs to be implemented now in order to avoid chaos off-world.

The legal status of physical property (eg, spaceships or satellites) in outer space has been a recurring topic in UN agreements, bilateral and multilateral agreements, proclamations of nations and intergovernmental organisations, international commission initiatives and studies by non-government bodies. Although there has been no international consensus concerning the status of intellectual property specifically, intangible rights have routinely featured on the periphery of initiatives dealing with rights, activities and international cooperation off the Earth’s surface. It is clear that more attention will focus on this area in the coming years in response to recent patent and copyright claims to inventions and coding created or used in outer space in conjunction with ISS activities.

The Treaty on Principles Governing the Activities of States in the Exploration and Use of Outer Space, Including the Moon and Other Celestial Bodies 1967 was written to address the exploration and research activities of independent states. Its collective spirit is shared by later treaties concerning outer space; therefore, parameters for private property ownership and territorial governance have been absent from such agreements.

Although this treaty specifies that outer space is not subject to national appropriation by a claim of sovereignty (ie, by use, occupation or other means), it nevertheless includes several provisions that could assist in managing future trademark ownership claims.

The Agreement on the Rescue of Astronauts, the Return of Astronauts and the Return of Objects Launched into Outer Space 1968 was ratified by the United Nations in order to ensure that persons or property of one state will be returned to that state if located by another participating member state.

It also contains detailed dispute resolution mechanisms that could conceivably be extended to future outer-space trademark claims. Arbitration enthusiasts are likely to find common ground with the mechanisms established in the convention, as they resemble structures followed by internationally recognised bodies such as the London Court of International Arbitration, the Singapore International Arbitration Centre and the New York International Arbitration Centre. However, the Liability Convention’s free-form interpretations of jurisdiction and liability may be difficult to apply in IP disputes because multiple states can qualify as a ‘launching state’ under this structure. What is more, the interpretation of damages is not limited to activities in outer space but includes damages that may be encountered on Earth (eg, that may result from a spacecraft’s interim flight or be sustained on the Earth’s surface).

The Convention on Registration of Objects Launched into Outer Space 1975 provides some clarification on jurisdiction by establishing a formal recordation system for physical objects launched into space.

It would be relatively straightforward to complement this treaty with trademark registration requirements, thereby generating a civil law-style deposit registration system for trademarks. However, conflicts about state claims could still arise due to the broad parameters permitted for qualifying as a launching state. In addition, states could conceivably incorporate trademark registration requirements in their national deposit systems for state objects. Because a launching state retains jurisdiction of its objects in outer space under the 1967 treaty, it could be argued that the registration and use of a trademark associated with that object should be governed by its national laws. In fact, the United States has affirmatively stated this interpretation in its own national statute dedicated to outer space activities (see 35 USC §105).

The Agreement Governing the Activities of States on the Moon and Other Celestial Bodies 1979 reiterates the non-proprietary themes of the Outer Space Treaty – namely, that exploration and use “shall be the province of all mankind” and “carried out for the benefit and in the interests of all countries, irrespective of their degree of economic or scientific development” and specifies that the moon is not subject to national appropriation by any claim of sovereignty (by use, occupation or other means).

These recurring themes are designed more to ensure freedom from political claims of sovereignty (ie, claiming Mars for Country X by planting a flag on the surface), than the protection of personal property, whether physical or intellectual. The agreement mirrors the jurisdictional aspects of the Outer Space Treaty by specifying that parties retain jurisdiction and control over personnel, space vehicles, equipment, facilities, stations and installations on the moon specifically, and the presence of such property on the moon will not affect any state’s ownership rights. The Moon Agreement also contains a clause encouraging the free exchange and movement of property, specifies a right of states to access property on the moon and prohibits states from conducting activities that would interfere with the activities of other states.

The ISS Intergovernmental Agreement 1999 has been signed by the 15 governments that are currently participating in activities conducted within the ISS. It permits participating nations to extend their jurisdiction to the ISS, thereby creating different national zones that correspond to the station’s separate pressurised modules. The ISS Treaty is the first to specify IP protection as a primary objective – it sets out traditional protections for patents, trade secrets and even marking procedures. Jurisdiction is determined by the location of the activity pertaining to the intellectual property – specifically, the pod or particular areas that may be under control of a nation’s ISS activities at a given time. The treaty provides a solid basis for states to claim control over any trademark creation and use that may result from their activities, since peaceful development of space is not antithetical to IP rights.

Notably absent from it is any structure regarding dispute resolution. IP claims are deferred to “the parties’ respective national regimes for intellectual property” and any contractual arrangements between parties. The issue of jurisdiction is likely to become a hot topic in response to the growth of research and commercial activities within the ISS. For instance, European nations that are situated thousands of miles away from Japan on Earth are within a mere spacewalk of one another.

Australia was one of the first states to codify its outer-space treaty obligations into its national laws. While the Space Activities Act 1998 does not iterate a formal stance on the legal status of intellectual property in outer space, it does permit future regulations to codify certain outer-space IP provisions detailed in the country’s 2001 bilateral agreement with Russia.

Article 7 of that bilateral agreement accounts for all intellectual property recognised by the WIPO Convention, including trademarks. It encourages contractual arrangements by permitting the IP agencies of these nations to reach their own separate agreements concerning conditions and principles that will be applied to intellectual property used or resulting from their joint outer space activities.

The United States codified its own outer space legislation in the form of its patent law Section 105, Title 35 of the US Code in 1990. The statute states that any invention made, used or sold in outer space on a US space object or component thereof will be considered made, used or sold within the United States, subject to international agreements and foreign launching state claims. US legislators conceived authority for Section 105 based on existing so-called ‘flag laws’ that permit US jurisdiction to govern activities that take place aboard US-flagged ships while they are in international waters. The international agreement component may support or prohibit US jurisdiction, while the statute allows for the United States to retain jurisdiction on a foreign space object if provided for in an agreement with a foreign state.

The statute effectively extends all appropriate US federal laws to applicable activities in outer space. US federal trademark law could conceivably be extended under this statute to govern certain commercial activities in space.

Laws of the sea

International laws and customs concerning the high seas are often cited as an ideal model for regulating outer space activities, since the oceans are beyond any one nation’s sovereignty. The most recognised agreement is the UN Convention on the Law of the Sea (UNCLOS) 1982, which provides an appealing method for regulating shared zones of outer space. However, practical issues remain concerning how to measure and govern outer-space territories; UNCLOS is littered with an abundance of independent state declarations and reservations. Disharmonies in state views regarding the fundamentals of international sea governance have been illustrated by recent fishing rights disputes, state disputes concerning rites of passage and broad claims to land rights that can include reefs and atolls.

How do we extend trademark protection off-world in future?

As we enter the new roaring ‘20s of the 21st century, we will need to establish at least a rudimentary trademark framework for Earth’s orbit, the moon and Mars. How the countries of the world will unite behind any plan is likely to be a hot political issue.

This is an extract from a longer article on off-world trademark protection that will be published in the next issue of WTR. For three possible routes forward, along with action points for all brand holders to consider, please see the full version, which will be available to subscribers at the start of January.