Trademark tacking and what it means for your brands

A US Supreme Court case has put tacking – protecting a later mark by asserting the priority date of an earlier similar mark – centre stage. Yet while the court clarified that tacking is a question of fact rather than law, it gave little guidance as to how this might affect trademark portfolios

The Supreme Court’s decision earlier this year in Hana Financial v Hana Bank (135 S Ct 907 (2015)) may be the first time that many rights holders and trademark lawyers have heard about the doctrine of ‘tacking’, but it has been alive and well for decades now.

Trademark tacking allows a rights holder to assert the priority date of an earlier similar mark if both marks create the same continuing commercial impression. Adopting the first-use date of the earlier mark – that is, ‘tacking’ it to the later mark – can help a rights holder to defend against those who could otherwise assert priority.

Tacking can allow rights holders to make minor modifications to their brands over a long period of time. Without the ability to adopt an earlier mark’s priority, rights holders would be forced to choose between retaining old marks for the sake of trademark protection and losing protection for new marks. With tacking, rights holders can avoid this difficult decision and safely make minor modifications to their marks to suit evolving consumer preferences or new brand initiatives.

The dispute in Hana Financial arose when Hana Financial – a financial services company and owner of the registered trademark HANA FINANCIAL and an associated mark since 1996 – filed a trademark infringement suit against Hana Bank, another financial services provider, which had been using the mark HANA BANK in the United States since 2002. In its defence, Hana Bank cited the doctrine of trademark tacking to argue that although it began using the mark HANA BANK only in 2002, it had used the similar mark HANA OVERSEAS KOREA CLUB and included the name HANA BANK in a logo since 1994. As a result, Hana Bank argued, the first-use date of its earlier marks should be tacked to its later mark, thereby giving it priority over Hana Financial’s 1996 first-use date.

At trial, the court concluded that tacking is a question of fact, rather than a question of law, and submitted the question to the jury. The jury returned a verdict in favour of Hana Bank, accepting the argument that Hana Bank’s earlier use of similar marks should give it priority over Hana Financial. The US Court of Appeals for the Ninth Circuit affirmed both the jury’s findings and the trial judge’s decision to treat tacking as a question of fact. In reaching the latter conclusion, the Ninth Circuit noted a circuit split between itself and courts in the Federal and Sixth Circuits, which treated tacking as a question of law to be resolved by judges rather than juries.

In a rare moment for the obscure doctrine, the Supreme Court took the opportunity to resolve the narrow question of whether tacking is a question of fact or law. The court unanimously agreed that tacking should be treated as a question of fact, affirming the Ninth Circuit’s ruling.

The justices first tipped their hand at oral argument. Several pressed the parties to articulate the precise standard for tacking, which was critical to understanding how it should be resolved. In their questioning, the justices appeared to adopt Hana Bank’s position that ‘continuing commercial impression’ is at the heart of the tacking inquiry, a conclusion that best supports the question of fact position. The Office of the Solicitor General, representing the United States as amicus curiae, also took the position that tacking is a question of fact. 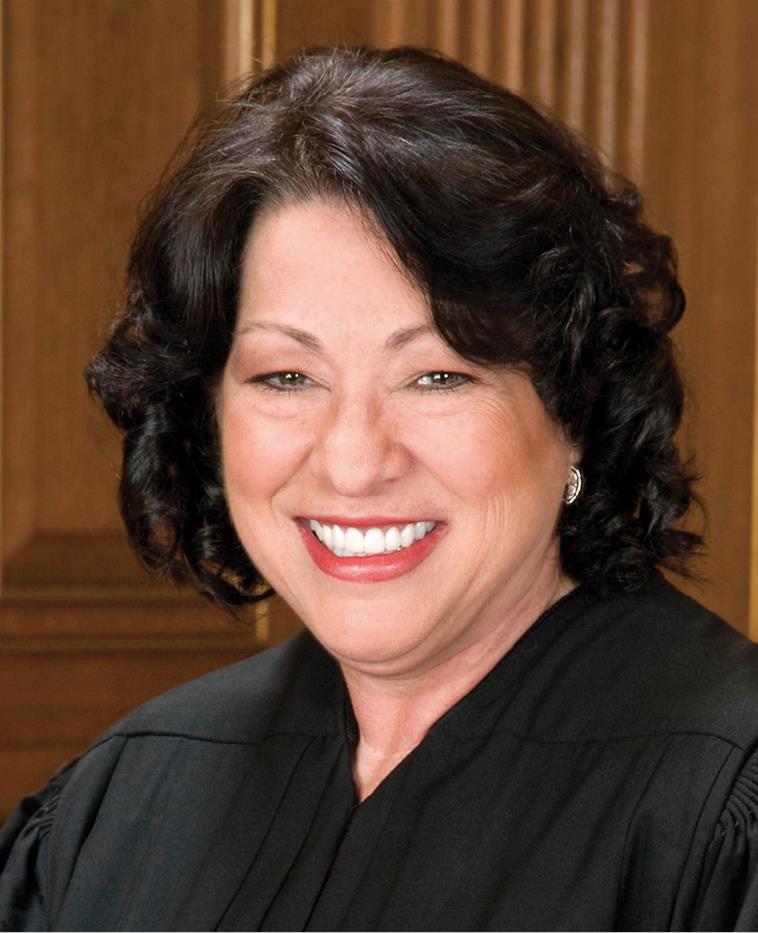 In an opinion issued by Justice Sonia Sotomayor, the Supreme Court unanimously held that tacking is a question of fact and is therefore subject to review by the jury (Pic: Wikipedia Commons)

On January 21 2015, in an opinion issued by Justice Sonia Sotomayor, the Supreme Court unanimously held that tacking is a question of fact and is therefore subject to review by the jury “[b]ecause the tacking inquiry operates from the perspective of an ordinary purchaser or consumer” (135 S Ct at 909). Formal adoption of the continuing commercial impression standard for tacking was essential to reach the larger question of whether tacking is a question of law or fact. The confusion over this threshold question arose from language in several lower-court decisions stating that tacking should be allowed only where two marks are “legal equivalents”. The Supreme Court clarified that although the “general rule adopted by lower courts” permits tacking where two marks are legal equivalents, that term itself “refers to marks that ‘create the same continuing commercial impression’ so that consumers ‘consider both as the same mark’” (id at 910, quoting Van Dyne-Crotty, Inc v Wear-Guard Corp, 926 F 2d 1156, 1159 (Fed Cir 1991)).

The court noted that juries are best equipped to decide questions about consumer impression, just as the Supreme Court has “long recognized across a variety of doctrinal contexts that, when the relevant question is how an ordinary person or community would make an assessment, the jury is generally the decision maker that ought to provide the fact-intensive answer” (at 911). However, as the court noted, the conclusion that tacking is a question of law does not necessarily remove judges from the process entirely; some tacking claims may be suitable for resolution on motions to dismiss or summary judgment where the facts allow (at 911, 912-13).

Hana’s impact on likelihood of confusion

Throughout the briefing, oral argument and eventual decision in Hana Financial, an even more significant question of trademark law loomed: whether the foundational likelihood of confusion test is itself a question of law or fact.

Nearly every trademark infringement dispute boils down to whether there is a likelihood of confusion between two marks. Section 43(a) of the Lanham Act (codified at 15 USC §1125(a)) provides a cause of action where a party is injured due to another’s improper use of a word, term, name, symbol or device that is “likely to cause confusion” between two products (15 USC §1125(a)(1)). In deciding whether a likelihood of confusion exists, courts generally apply several non-exhaustive factors, a practice known in some courts as ‘digits of confusion’ analysis (eg, Bd Of Supervisors for Louisiana St Univ Agricultural & Mechanical Coll v Smack Apparel Co, 550 F 3d 465, 478-85 (5th Cir 2008)).

The split between circuits is over whether, on appeal, a likelihood of confusion finding must be reviewed as a question of law subject to de novo review by an appellate court or as a question of fact subject to review under the more deferential clearly erroneous standard (see generally 4 McCarthy on Trademarks and Unfair Competition §§23:67-74 (4th ed)). Although the issue has been the subject of a circuit split since at least the early 1980s, the Supreme Court has declined to step in and resolve the question (§23:72).

The Supreme Court’s opinion in Hana Financial definitively resolved whether tacking is a question of law or fact, but did not educate rights holders about how trademark tacking might affect their portfolio. Based on earlier decisions, Trademark Trial and Appeal Board guidance and, to some degree, Hana Financial, there are several key takeaways for parties looking to preserve their trademark protection.

First, because consumer impression is the lynchpin of trademark analyses, including tacking questions, companies looking to refresh or modernise their marks must focus on preserving the core features of their old mark in any new mark. If a company is looking to conduct a routine brand refresh, it can benefit from trademark tacking and should make efforts to retain essential features of the old marks. However, recognising that “tacking applies only in exceptionally narrow circumstances” (at 910 (internal quotation marks omitted)), rights holders may often prefer to file for new registrations for all but the smallest changes.

Second, if a rights holder chooses to pursue the benefits of tacking, it should understand and document how consumer impressions remain the same during the brand refresh. In many instances, this may include conducting a brand survey or focus group before changing a mark to decide whether the new mark creates the same continuing commercial impression as the older mark – and may therefore benefit from tacking – or whether an entirely new registration is required. Although studies and surveys come with a price tag, having comprehensive, contemporaneous studies will save a company significant costs when other rights holders challenge its trademark priority. In some instances it may even be appropriate to take a proactive approach and educate consumers about the transition between two marks.

Third, if a defendant raises the doctrine of trademark tacking in opposition to a lawsuit for trademark infringement, it will often have to brace itself for lengthy and costly discovery. The Supreme Court decision confirming that tacking is a question of fact could make it more difficult for defendants to prevail at the earliest stages of a lawsuit because it will be harder for them to demonstrate that their opponents have failed to state a claim as a matter of law. That said, summary judgment will remain a viable option for parties which can strengthen their claims to trademark tacking during the discovery phase of a lawsuit.

Hana Financial’s most significant contribution to trademark law might be the way it has reintroduced tacking into the trademark landscape. Rights holders can take advantage of tacking by keeping its principles in mind when they modernise or adjust their marks, thereby retaining priority over valuable brands. Rights holders can solidify their claim to tacking by conducting contemporaneous brand surveys and other consumer-facing studies which can later be used to demonstrate that two marks create the same continuing commercial impression. However, in the event that tacking is raised at trial, defendants should brace themselves for significant litigation costs because – as we now know with certainty – trademark tacking is a question of fact.