Print article
Australia
Legal updates: case law analysis and intelligence
In Marvel Characters Inc v Charles ([2011] ATMO 92, September 14 2011), the Australian Trademarks Office (ATMO) has found that an opposition in relation to a trademark application for GHOST RIDER had succeeded on the basis that the trademark application had been made in bad faith.
The trademark application for GHOST RIDER was filed by Gary Charles in Class 25 of the Nice Classification in relation to a range of clothing. The applicant was self-represented. The application proceeded to acceptance and was then opposed by Marvel Characters Inc, the owner of the famous Ghost Rider comic book character, pictured below. The comic book character featured in a recent movie starring Nicolas Cage, which was filmed in Melbourne. 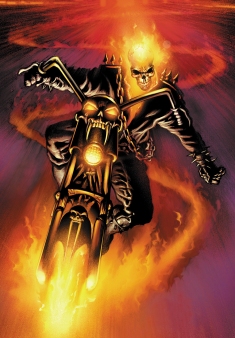 Although several grounds for opposition were relied upon by Marvel, the hearing officer issued her decision in favour of Marvel in relation to the bad-faith ground only. Section 62A of the Trademarks Act 1995 states that the registration of a trademark may be opposed on the ground that the application was made in bad faith.
Supporting evidence filed on behalf of Marvel included details of a trademark search conducted of the ATMO Register, as well as an investigation of the applicant conducted by a private investigator.
The trademark search revealed that the applicant had previously filed several applications for well-known and famous marks owned by third parties such as RED BULL, ARMY OF ONE (the name of the 39th episode of the popular television series The Sopranos) and BEAT DOWN (the name of a movie about a street fighter released in 2010).
In addition, the private investigation revealed that the applicant was offering for sale several counterfeit garments from shop premises in Queensland, including Spider-Man and Marvel superheroes-branded garments. Of particular significance was the fact that the investigator was able to make a trap purchase of men's and women's denim shorts featuring the GHOST RIDER mark. The mark was depicted on swing tags and sew-in labels in unusual flaming typescript which was identical to that used by Marvel in its comic books and other promotional materials. Further, the applicant's mark was depicted together with the image of a motorcycle ridden by a rider with a flaming skull. This imagery clearly depicted Marvel's Ghost Rider comic book character. This manner of use was very persuasive in countering the applicant's contention that he had not copied Marvel's Ghost Rider brand, but had adopted it merely because he liked the name.
The hearing officer stated as follows:
"The evidence which the opponent has provided in respect of the applicant's other trademark applications and registrations, in conjunction with the evidence of the clothing brands available for sale in the applicant's shop, is sufficient for me to be satisfied that this application is an example of the applicant's standard pattern of behaviour, a pattern which leaves much to be desired as far as commercial fair dealing is concerned".
Therefore, the aforementioned factors were sufficient for the hearing officer to conclude that the application had been made in bad faith and the opposition succeeded on this basis.
This decision represents a common-sense outcome whereby the hearing officer was able to look at the realities of the applicant's business activities, including the mode of use of the applied for mark with a view to determining whether the application was made in bad faith. The decision expands upon the small body of Australian case law relating to trademark applications made in bad faith.
Fiona Brittain, Davies Collison Cave, Melbourne
Davies Collison Cave represented Marvel Characters Inc in these proceedings