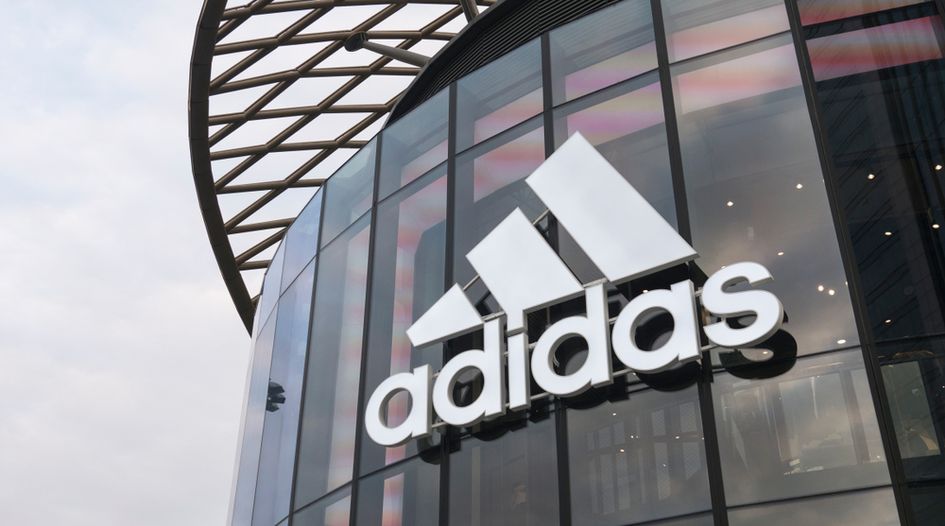 On 19 June, the General Court of the EU upheld the decision of the EUIPO Appeal Board to invalidate adidas’ most ambitious attempt to register its well-known ‘three stripes’ logo. The decision deals a further blow to adidas in its long-running dispute with Shoe Branding Europe BVBA (SBE), though adidas retains its ‘three stripes’ protection in the EU due to more narrowly defined marks that remain on the register.

Back in 2009, adidas filed oppositions against SBE’s attempt to register two trademarks for a pattern of two stripes placed on categories of shoe and filed oppositions against both. In response, SBE began cancellation proceedings against one of adidas’ ‘three stripes’ marks (the mark). It seemed the tide was turning in adidas’ favour in March 2018 when the General Court ruled that SBE’s marks took unfair advantage of adidas’ reputation without due cause. This may have dealt the final blow to SBE’s stripe-related filings (the EUIPO website reveals no indication the decision has been appealed).

However, adidas has not been so successful when defending its own three stripes mark against SBE’s retaliatory challenge. The mark was declared invalid by the Cancellation Division of the EUIPO on the grounds that it lacked inherent and acquired distinctiveness. Subsequently, adidas appealed the finding as to the lack of acquired distinctiveness to the EUIPO Appeal Board, but the original decision was upheld, prompting a further appeal on that issue to the General Court.

The mark was registered as a figurative mark for clothing, footwear and headgear in Class 25. Its description reads “three parallel equidistant stripes of identical width, applied on the product in any direction”. In the General Court, adidas argued that the mark was a “pattern trademark”, which could be extended or cut in various ways, such as a slanted angle, rather than a standard figurative mark, as had been decided by the Appeal Board. However, the court noted that neither the description nor the depiction of the mark indicated that it could be interpreted as a repeating pattern. In short, it was an ordinary figurative mark with the proportions shown on the register.

Following Nestle v Mondelez, proof of acquired distinctiveness is a developing area of EU jurisprudence. The CJEU held that in some circumstances the applicant may not need to file separate evidence for each Member State, but for the valid registration of a mark that lacked inherent distinctiveness, an applicant nevertheless had to prove acquired distinctiveness throughout the territory of the EU. Due to geographic, cultural or linguistic proximity, consumers in one Member State may have a sufficient knowledge of the goods in a second Member State. It was also possible that several Members States could be grouped together in the same distribution network and treated as a single market.

The wording of the relevant legislative provisions as to acquired distinctiveness does not provide clarity on whether the use of the mark must be identical to that registered, or whether any flexibility in the form of the mark is permissible. Agreeing with adidas, the General Court ruled that use of forms of a mark that differed only insignificantly from the registered mark, and were therefore “broadly equivalent”, was relevant when determining acquired distinctiveness.

However, applying this approach, the court dismissed much of the evidence filed by adidas on the basis that it related to signs that differed significantly from the mark. Its reasoning was threefold. First, given the mark was extremely simple in form and one of its characteristics was the use of three black stripes against a white background, even very minor changes were enough to alter consumer perceptions. Second, many of the examples featured an inverted colour scheme. While the court accepted that, in some situations, such a scheme would not impose a significant variation, this did not apply here due to the mark’s extreme simplicity. Thirdly, according to the Appeal Board, several examples showed two black stripes on a white background, surrounded by a larger area of black material, which adidas argued featured three white stripes on a black background. In response, the General Court claimed that, if this had been the case, the examples would not pass the ‘inverted colour scheme’ objection.

The only remaining evidence that the court considered material was a selection of market surveys led by adidas in Germany, Estonia, Spain, France and Romania. The research was designed to measure the degree of distinctiveness of the mark, which was defined as the percentage of consumers who, when presented with examples of the mark on sportswear and sports equipment, perceived them as originating from a single undertaking. The court accepted the research provided relevant evidence of acquired distinctiveness in the five applicable Member States. However, it ruled that adidas had not been able to produce evidence that allowed the results to be extrapolated to the rest of the EU so the appeal was rejected, and the decision of the Appeal Board to cancel the mark was affirmed. It remains to be seen whether adidas can preserve the mark through an appeal to the CJEU.

For brand owners, the clarification that trademark owners may rely on broadly equivalent variants when seeking to prove acquired distinctiveness may be helpful. However, the court’s indication that only “insignificant variations” are relevant suggests that the scope for relying on variants will be narrow, particularly where, as in adidas, the mark is very simple in form. It seems adidas had sought to rely upon its vast brand recognition for its three stripes motif to establish the acquired distinctiveness of a unitary abstraction from those variants. Brand owners should note that variants of a less ambitious trademark may enjoy more success.

Finally, adidas suggests that brand owners seeking to benefit from the CJEU’s ruling in Nestle require more detailed evidence as to the organisation of the relevant distribution network and/or a specific geographic, cultural or linguistic basis for extrapolating evidence of acquired distinctiveness beyond one Member State.