“There must be something about trademarks that draws wonderful people to the field”: celebrating Mary Boney Denison's award-winning career 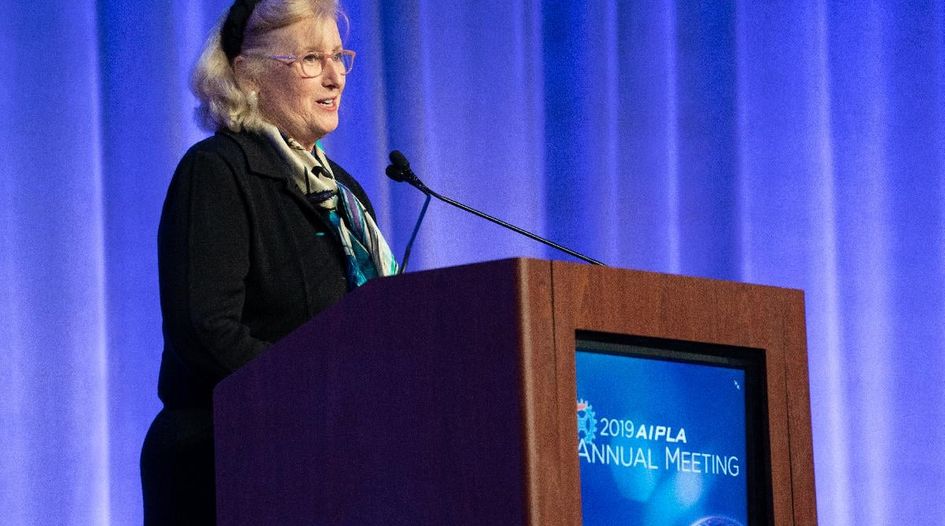 WTR caught up with retired USPTO commissioner for trademarks Mary Boney Denison to discuss her prominent career and the experiences that led to her being officially awarded the Lifetime Achievement accolade at the 2020 WTR Industry Awards.

What was it that attracted you to a career in trademarks?

I have always been interested in art and had the opportunity to study at L’Ecole du Louvre during college. I come from a family of architects and in my childhood was surrounded by the visual world so the visual aspect of trademarks appealed to me. Also, I am an avid shopper and loved representing brands I knew.

Before joining the USPTO you were active on the wider trademark scene, serving as a member of the INTA board of directors and on the USPTO Trademark Public Advisory Committee (TPAC). How did these activities help to shape your views of the trademark industry and community?

INTA gave me access to the global trademark bar and the different views that members have on trademark law. It helped me to understand better how the US system is perceived outside the United States. In addition, it gave me the opportunity to lead trademark professionals from around the globe working towards common goals.

The TPAC, meanwhile, gave me my first real peek at how the USPTO operates on a day-to-day basis. Serving on the committee gave me a better understanding of the complexity of accomplishing things at the office and the many challenges that it faces. From the outside it is easy to criticise the USPTO, but the more you know, the more you realise the many difficulties that it faces in trying to meet the needs of its stakeholders on a daily basis.

Having been a founding partner at Manelli Denison & Selter, in 2011 you joined the USPTO. What was your motivation for making the move and how great a contrast was it with law firm life?

I was not looking for a job when the deputy commissioner for trademark operations position was posted – I was in private practice serving on the TPAC. After the job was posted, Kathryn Barrett Park (a fellow TPAC member) and Michelle King (an INTA staff member) each separately suggested that I apply for it. The more I thought about it, the more I thought I was ready for a change – I was ready to join the rest of my family of public servants in giving back. I applied and the rest is history.

Looking back, moving to the USPTO was a huge career change for me. I went from working at a small law firm to a large government organisation where I was responsible for the work of hundreds of examining attorneys. So my responsibilities were dramatically increased and I had to spend a lot of time educating myself on how the USPTO actually operated. Thankfully, I was surrounded by a superb cadre of career USPTO lawyers, who eased the transition.

Someone asked me after I had been at the USPTO for about two weeks whether I missed private practice. The answer that popped out of my mouth without forethought was: “I have not thought about it.” That was followed promptly by: “No.”

What were the most satisfying aspects of your work at the office?

I am a people person so the answer has to be getting to know – and work with – the amazing USPTO staff. Many on the outside perceive government employees in a negative way. I found USPTO employees to be smart, hardworking and devoted public servants. It was a true honour to work alongside them for eight-plus years.

It was also incredibly satisfying to implement the requirements for US counsel, mandatory electronic filing and mandatory logins, as well as to increase the minimum operating reserve for the USPTO Trademarks’ business unit (this allows trademark operations to continue even in the event of a government shutdown). Each of these initiatives had multiple challenges but through our teamwork and persistence we made them happen. That felt good!

In what ways has the wider trademark environment evolved during your time in and around the industry?

Another shift has been in applications from entrepreneurs. The USPTO has done a good job of raising awareness among entrepreneurs so that now I believe that they have a greater appreciation for the importance of trademarks to their businesses and we have seen a significant increase in applications being filed without attorneys. The USPTO has responded to that by offering greater resources to small businesses.

In addition, applicants are more likely to be selling internationally and, as everyone knows, there has been a dramatic increase in Chinese filings both in the United States and around the globe.

What has not changed is the warmth and collegiality among members of the trademark bar around the world. There must be something about trademarks that draws wonderful people to the field.

If you could make one change in the trademark world, what would it be?

If I could wave a magic wand over US consumers, I would give them a thorough understanding of the dangers of buying counterfeit goods and the damage that buying these inflicts on the economy. If we can reduce the demand for fake goods, we will have made significant progress in the war against counterfeiting.

What would you say have been the personal highlights of your career?

Early on, it was working on a non-trademark litigation involving the export of a Matisse painting from Italy. As a third-year associate at a New York firm, I flew off to Paris and London to meet with Matisse’s son and the world expert on Matisse paintings. That was very exciting for a young lawyer.

At the USPTO, I considered the implementation of mandatory electronic filing and the US counsel requirement to reduce fraud on the office, as well as the increase of the operating reserve, to be my key accomplishments. And, of course, it was a huge honour to serve as commissioner for trademarks for five years.

Is there anything you would change in your career if you had the opportunity?

I would have left Big Law earlier. In private practice, I found that it was only by working for myself that I had enough control for a good work-life balance.

The most important people were my parents. My mom pushed me to go to law school when I was more inclined to head back to France. My dad taught me the importance of hard work and the importance of being nice to people. In addition, I had a number of mentors during my years at Graham and James, including Chris Larkin, Peter Farkas, Mike Selter and Lee Bendekgey who helped me learn how to believe in myself as a trademark lawyer. Finally, as mentioned earlier, Kathryn Barrett Park and Michelle Kind had a huge influence on my career by suggesting that I apply to become the USPTO deputy commissioner for trademark operations.

Mary Boney Denison retired from her position as USPTO commissioner for trademarks at the end of 2019.

Before joining the office, Denison was a founding partner of Manelli Denison & Selter, practising in trademark prosecution and litigation, before becoming a partner at Graham & James, where she practised for 10 years.

She was a member of the INTA board of directors for three years and served another three-year term on the USPTO Trademark Public Advisory Committee. In 2011 she joined the USPTO as deputy commissioner for trademark operations, where she was responsible for trademark application, legal examination and registration processes.

She became trademark commissioner for the office on 1 January 2015 – a role that required oversight of all aspects of the trademark organisation, including policy, operations and budget relating to trademark examination, registration and maintenance. She has since led outreach to the trademark legal community, small businesses and applicants without legal counsel, while also being an active participant in meetings with the world’s largest IP offices, promoting projects aimed at harmonising trademark practices and procedures.

At the USPTO she initiated several projects to enhance and expand internal and external communications, as well as employee career development. She also spearheaded efforts to move towards implementing mandatory electronic filing for trademarks, decluttering the register, updating IT systems and enhancing the customer experience.