The failure of failure to function: why an examination overhaul is needed at the USPTO 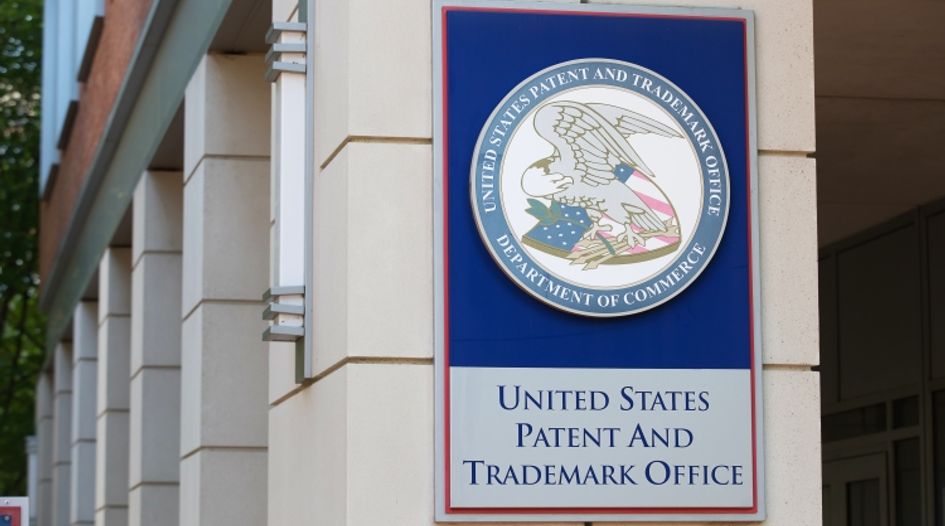 In an exclusive guest post, Lucas Daniel Cuatrecasas, JD, the author of a new trademark law study forthcoming in the New York University Law Review, outlines why failure to function has become a “muddled doctrine”, and suggests what the USPTO and brand owners can do to fix it.

Brands seeking to register trademarks at the USPTO are increasingly hitting a stubborn snag: the failure-to-function doctrine. Under this doctrine, the USPTO will deny registration if a brand’s proposed mark “fails to function” as a trademark. Whether it does depends on the USPTO’s own view of how consumers would perceive the proposed mark. In particular, failure to function has recently become the darling of the Trademark Trial and Appeal Board (TTAB), with the chart below attesting to its ballooning docket of failure-to-function cases.

Annual number of TTAB decisions under failure to function and related categories: 2000-2020 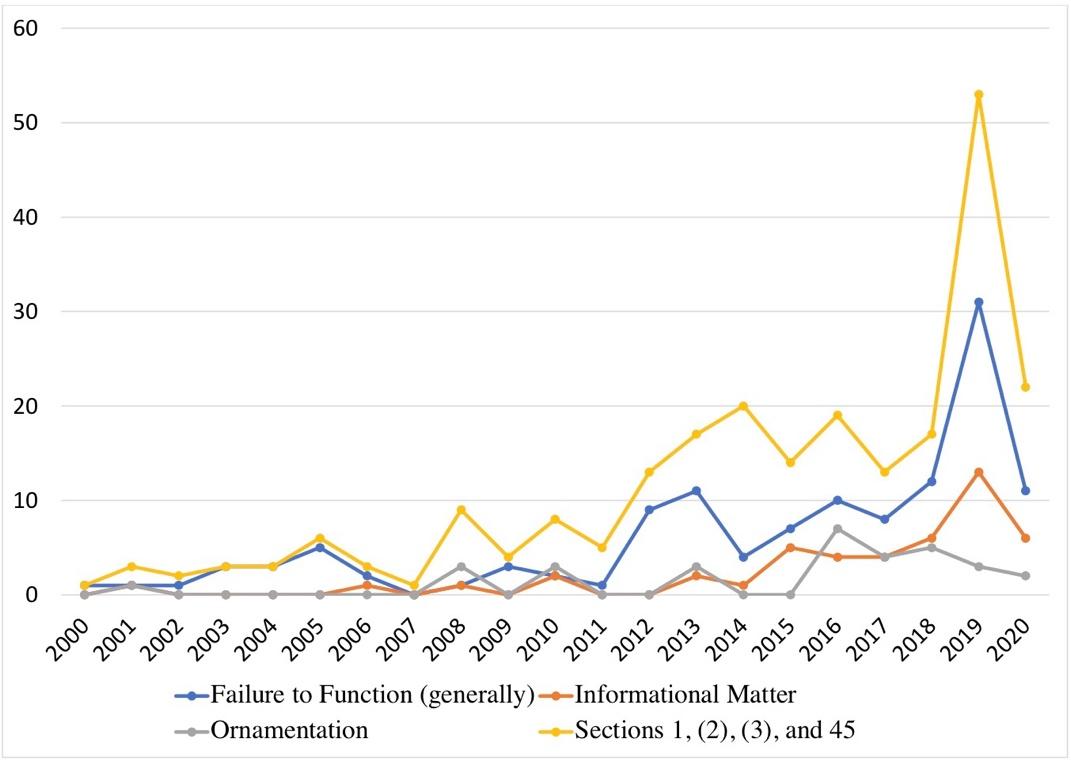 The trouble with failure to function

Various global brands have felt the sting of a failure-to-function rejection. For example, the TTAB rejected a proposed mark (below) consisting of Canadian apparel brand Lululemon’s signature wave logo, integrated into its clothing. The TTAB felt consumers would perceive the design as ornamentation, not as a mark. Yet – as Lululemon’s arguments suggested – it was far from clear that consumers would fail to recognise this simple yet eye-catching design, particularly given Lululemon’s branding strength. 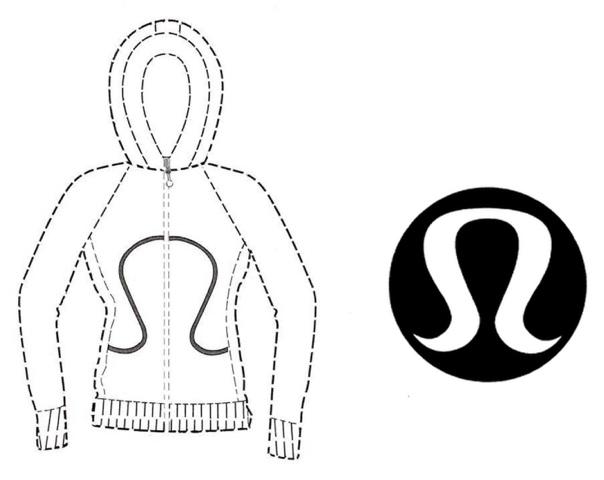 Lululemon is not alone. Recently, the German brand CLAAS faced a similar rejection of the subtle yet attention-grabbing branding on its agricultural machinery. And in an earlier case, the TTAB likewise rebuffed US clothing maker Banana Republic’s bid to register an understated yet evocative design on its loyalty cards. 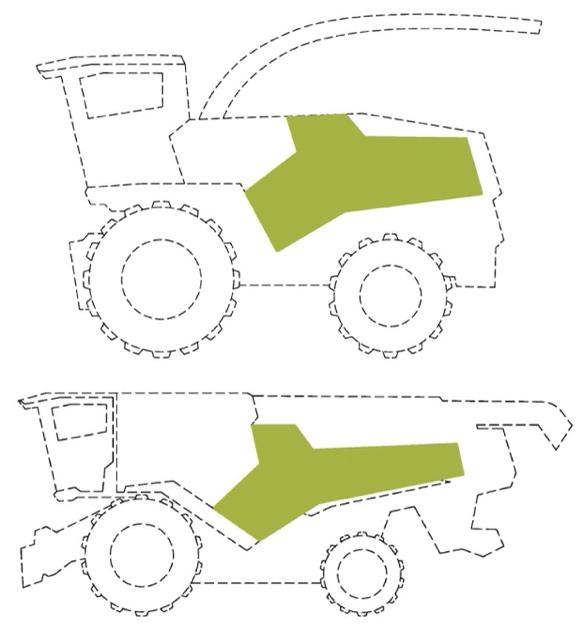 The trouble with these cases is that failure to function is a vague test with numerous open-ended factors (eg, a proposed mark’s “commercial impression”). Given this free rein, the TTAB’s recent cases have added, subtracted, and modified its factors unpredictably, changed the weight given to these factors, and even revised how the TTAB conceptualises them. Brands simply cannot know what to expect.

Recently, for example, the TTAB reversed a refusal of JUST ANOTHER DAY IN PARADISE. The USPTO had initially rejected the mark on the ground that it merely conveyed a message, not a commercial source. But the TTAB disagreed, in part because the mark exhibited “potential ambiguity” (eg, it could mean “taking pleasure in small things” or instead “getting away for a vacation”). It therefore conveyed no specific message.

However, “potential ambiguity” is a case-specific factor the TTAB unpredictably added in. Other cases explain that a proposed mark can merely convey information even if it lacks a single, all-purpose meaning. Nor will multiple meanings (eg, a double entendre) turn a mere message into a mark.

Likewise, sometimes the TTAB examines dictionary definitions of each word in a mark (eg, in rejecting UNLIMITED CARRYOVER for telecommunications services). But sometimes it does not (eg, in rejecting INTELLIGENCE OF THINGS for various supply chain services). Moreover, in some cases, the TTAB gives significant weight to a proposed mark’s widespread use by third parties, which suggests the proposed mark cannot indicate a single source (eg, in its rejection of WORLD’S BEST DOWN for bedding). But in other cases this factor receives almost no weight (eg, in the rejection of UNLIMITED CARRYOVER, which was not pervasively used).

Additionally, the TTAB has changed its conceptualisation of the failure-to-function enquiry over time to make it more rigid and less applicant friendly – as brands have doubtless noticed.

A threat to brands and consumers

The TTAB’s inconsistency leaves brands and their counsel without certainty. Established brands may forgo registration of marks in which they have created value, lest the USPTO tell them their marks ‘fail to function’. Likewise, newcomers seeking to build a brand may be dissuaded from picking an effective mark if they perceive an unpredictable risk of a failure-to-function refusal.

These effects can arbitrarily tip the scales in favour of brands with registered properties, reducing vital competition that benefits consumers through cost reduction, quality improvement, and innovation.

However, to be sure, failure to function is not all bad. Today’s failure-to-function cases have their origins in cases that narrowly focus on the specimen of mark use presented by an applicant. In those cases, the USPTO principally asks whether a mark’s presentation to consumers – ie, how and where it appears on the specimen – conveys a commercial source. This more restrained enquiry is generally harmless and is not the primary cause of the TTAB’s recent inconsistency, which focuses more on mark content than mark presentation.

Moreover, even today’s more content-focused failure to function can be useful. Indeed, it can help the USPTO prevent the registration of proposed marks that competitors and the public need.

Consider the words ‘covid-19’ or ‘coronavirus’, for which applicants have recently sought registration. These proposed marks are nothing more than language widely used by many sources, as the USPTO has rightly argued in rejecting them for failure to function. Indeed, failure to function’s ability to ensure competitors and the public have access to such widely used matter has prompted academics, most notably Professor Alexandra J Roberts, to advocate for more use of the doctrine in one form or another.

Ensuring access is key, but such advocacy is misguided when it comes to the TTAB. Applicants do not need more fuzzy decisions that say they evaluate consumer perception but provide little real guidance about which marks are acceptable. Rather, the TTAB should turn to the aesthetic functionality doctrine – a doctrine that is widely known to overlap with failure to function – as a replacement for failure to function’s current, muddled doctrine.

Aesthetic functionality holds that the USPTO should reject a proposed mark when it is a product feature that would significantly hinder competition in the relevant market. Currently, the doctrine only applies when a proposed mark is used decoratively. But the TTAB should expand this competition-focused enquiry. In place of its current take on the failure-to-function doctrine, the TTAB should ask whether registering any proposed mark – decorative or not – would hurt competitors. Under this test, it is far less clear that branding elements like those of Lululemon, CLAAS, and Banana Republic above fail to function. At face value, they do not seem to be elements to which these brands’ competitors need access.

Yet language like ‘covid-19’ would remain off-limits as competitors in virtually any market may need to use such language. Of course, the TTAB must be careful with certain marks that enjoy significant acquired distinctiveness – marks like, for example, AMERICAN AIRLINES. Such marks can appear useful to competitors, but these marks result from, rather than hinder, vigorous market competition.

In my view, then, such competition-based enquiry would promise more clarity for brands while furthering trademark law’s goal of fostering competition.

Moving forward: the upshot for brands and their counsel

The US trademark statute does not mandate the current failure-to-function doctrine. Rather, it is the TTAB that has shaped this enquiry into the muddle it has recently become. As such, the TTAB holds the power to entrench – or to change – the current doctrine.

Nonetheless, brands also hold power. They can flip the script on the TTAB. Some previous failure-to-function decisions from the TTAB and its reviewing court mention competitors’ interests in using a proposed mark (eg, CONSISTENTLY SUPERIOR or INVESTING IN AMERICAN JOBS) as an additional – but not central – reason for denying registration. Yet, both before the TTAB and in their thought leadership, brands should foreground this latent factor.

Brands can urge the TTAB to think carefully about whether a failure-to-function refusal would serve the policy goal of protecting competition. If not, brands can explain that a failure-to-function decision unhinged from that goal – a decision solely based on the USPTO’s impressionistic evaluation of what consumers supposedly think – rests on shaky ground. Indeed, the TTAB’s current inconsistency proves it.

Of course, this strategy is not a silver bullet. Any shift to a competition focus will be a gradual one. But inviting the USPTO to focus primarily on its important role in protecting competition is a first step towards turning failure to function into a doctrine that works better for brands, consumers, and trademark law’s fundamental goals.