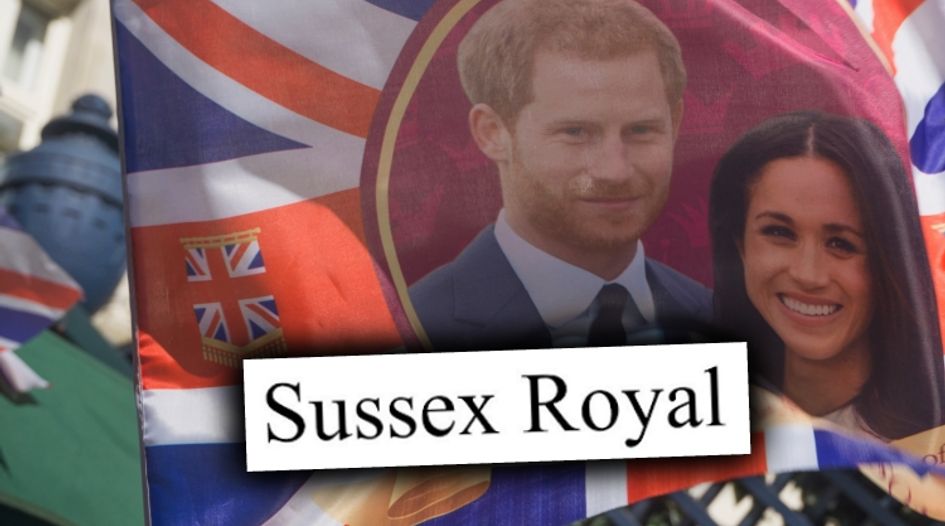 As the Duke and Duchess of Sussex announce that they have withdrawn their SUSSEX ROYAL trademark applications, we look at the lessons that IP owners can take from the long-running saga.

Prince Harry and Meghan Markle’s quest for legal protection of their Sussex Royal brand has been one of the highest profile trademark stories in recent years. What began as a young couple launching a charitable foundation turned into a saga involving unauthorised trademark applications, an Australian doctor and an intervention from the Queen. To briefly recap:

Over the weekend, the saga – as it relates to Sussex Royal – appears to have come to an end. In a post on their website, the duke and duchess confirmed that their non-profit organisation will not utilise the name ‘Sussex Royal’ or any other iteration of ‘Royal’. Therefore, the pending UK trademark applications have been withdrawn. In an arguably bitter conclusion, the statement adds: “While there is not any jurisdiction by the Monarchy or Cabinet Office over the use of the word ‘Royal’ overseas, the Duke and Duchess of Sussex do not intend to use ‘Sussex Royal’ or any iteration of the word ‘Royal’ in any territory (either within the UK or otherwise) when the transition occurs Spring 2020.”

Reacting to this latest development, Lee Curtis, chartered trademark attorney and partner at HGF, tells WTR that he is “not surprised by the decision to abandon the Sussex Royal brand in light of the apparent opposition of the Queen”. However, he questioned the logic that the pair could have continued using the Sussex Royal brand outside of the United Kingdom. “Although the statement released by the royal couple on Friday night was correct in very simplistic terms, if the couple had persisted in the use and registration of Sussex Royal beyond the UK, it would have led to a dual brand strategy, which would have had immense practical difficulties both from a legal and brand strategy perspective.”

Ultimately, Curtis says: “Once the Queen had a problem with the Sussex Royal brand, it was doomedon a global basis.”

Lessons from the saga

For Meghan and Harry, it is back to the drawing board when it comes to coining a name for their planned charitable foundation. However, there are a number of lessons that all brand owners – including the royal pair – can take from the Sussex Royal saga. The first is around clear communication.

“It seems to me many of the problems with the Sussex Royal brand is that the couple never effectively communicated how the brand would be used – and this could be a problem for the future of any new brand,” Curtis explains. “Many of the concerns from the press, public and presumably the Queen seem to stem from a fear over the commercialisation of a brand with royal connections. For example, there was talk of using the brand in a new way to support good causes maybe as a sort of ‘social brand’. However, these aims seemed at odds with the desire to be financially independent from the Crown and thus presumably to generate revenue from the brand in a conventional way.”

Therefore, for any IP owner developing a high-profile brand that contains a potentially sensitive term, effective and regular communication is key. Although the specific circumstances of the Sussex Royal brand are highly unusual and unique (as was the subsequent media storm), a backlash is a common occurrence that can be avoided through good communication.

On top of that, the saga is a reminder of how IP backlashes can be made worse through inaccuracies in media reporting. As we reported last month, the couple’s UK trademark application receiving a notice of threatened opposition (a relatively minor legal development), which was described by the press as a “royal humiliation” for Meghan and Harry, with claims they had been “blocked” (or “temporarily blocked”) or had “failed” in their bid to secure the mark. “The couple did not seem to appreciate that the press and public routinely misunderstand why trademarks are registered and to question the motives of anybody registering trademarks, often wrongly, which has to be countered for a high-profile and sensitive brand such as Sussex Royal,” Curtis remarks.

Of course, the couple could not have predicted many of the developments that occurred with the SUSSEX ROYAL trademark applications. Nonetheless, Curtis says that it is essential for all brand owners to consider possible eventualities to trademark filings (particularly high-profile or sensitive ones) and then proactively plan a response. “At the start of the development of a brand of this nature, the objectives of what is to be achieved by the business behind such a brand have to be set down explicitly and clearly at the outset,” he says. “For example, is this a traditional brand, a so-called social brand or some combination – and how can this be married with any brand protection strategy? One then has to anticipate any objections to the use and registration of such a brand prior to filing and deal with them legally, out of the spotlight of the press – and this might not only be dealing with sensitive terms, but also prior rights.”

One way to avoid the spotlight could be to obtain prior rights in a smaller jurisdiction before securing protection in your key markets: “Filing a priority application in a country with a trademark register not commonly monitored by the press, such as Jamaica, is a policy we have followed in the past with sensitive or high-profile marks, safeguarding the mark but giving you six months lead in to deal with any issues with the brand,” Curtis adds. “One also has to be ready with a media strategy so you are in front of the press explaining why trademark protection is being sought, what has been sought and where and how the trademark is to be used in public. The later strategy will stop undue fears being raised by the press and public and hopefully head off the filing of conflicting applications post-filing.”

Given that any activity of Prince Harry and Meghan Markle is reported rabidly (and mostly negatively)  by the global press, their trademark venture was no different. But, for Curtis, the widespread coverage of the different stages of the registration process was one of the positives of the whole saga. “We can be thankful to the royal couple for raising the profile of brand protection,” he concluded. “This was the first time I have ever heard a discussion of the withdrawal of two humble UK trademark applications on the main BBC News programme on prime-time television, and that happened on Friday night.”