The mark consisted of a plain red dot affixed centrally to the bottom of cookware receptacles (eg, frying pans and saucepans), as shown below. 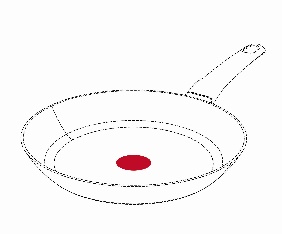 When first examined by the UKIPO, the application was rejected on the basis that the relevant consumer would not attribute trademark significance to a plain red circle. It was therefore found to be devoid of distinctive character.

Tefal sought permission from the examiner to conduct a survey across UK high streets, which involved carrying out 250 interviews. The results showed the following:

Tefal relied on the survey evidence (ie, that when taken as a whole, 60.25% of consumers surveyed mentioned Tefal when presented with the red dot application), among other evidence, to demonstrate that the mark had acquired distinctiveness.

The hearing officer took issue with the wording of the survey questions and ultimately was unconvinced that the relevant consumer relied on the red dot to denote trade origin. Instead, they merely associated the red dot with Tefal.

Marks that are devoid of distinctive character are incapable of fulfilling the essential function of a trademark (ie, to distinguish the goods or services of one undertaking from those of another). If the mark is not inherently distinctive, the brand owner will need to demonstrate (with evidence) that it has educated a significant proportion of the relevant public to see the sign as a trademark guaranteeing the origin of the goods.

The hearing officer acknowledged that Tefal’s figures for sales, promotion and advertisement were substantial. However, simple exposure to a sign does not make the case for acquired distinctiveness. The issue came down to the question of reliance and whether the red dot on its own would be seen as a badge of origin by the average consumer.

Despite heavy advertising and promotion of the red dot, the hearing officer decided that Tefal had failed to divorce the dot from its technical function as an indicator of heat. As Tefal was unsuccessful in proving that the mark had acquired distinctiveness, the application was refused under Section 3(1)(b) of the Trademarks Act 1994 for the goods specified.

Comment
The hearing officer suggested that Tefal could have distanced the red dot from its technical function by referring to the applied-for mark as a brand identifier (eg, “the pan with the red spot”). Tefal’s inability to get away from the mark’s technical function was ultimately its downfall in this case.

When conducted properly, surveys in registry proceedings can be a useful tool, among other evidence, to demonstrate that a mark has acquired distinctiveness. However, surveys are notoriously difficult to get right, and can be a costly exercise. In this case, the survey evidence failed as many consumers recognised the application as a heat spot, which indicated when the pan was hot enough, thereby demonstrating its technical function.