The product at issue - an energy drink - bore the words '100% positive energy' next to the word 'run'. The can looked as follows:

Red Bull relied on various Community and national trademarks, including:

Red Bull also owned an abstract colour trademark, which was registered in 2002 upon proof of acquired distinctiveness, and is currently the subject of five cancellation actions before the Office for Harmonisation in the Internal Market (Proceedings 5922C, 5843C, 5759C, 5920C and 5921C). The description of the mark states that the blue and silver colours each occupy 50% of the mark. 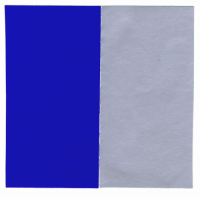 Red Bull sought an injunction against the use of the contested sign and get-up in the entire European Union.

A judgment by default was rendered against the first defendant, and the case against the third defendant was settled. The second defendant lost the case in two instances, but filed an extraordinary appeal to the Supreme Court, which was deemed admissible. However, the court rejected the appeal, holding that the imitation of a famous combination of colours (here, CTM 2.534.774) may lead to the unlawful exploitation of the famous trademark, if identical or very similar colours are used in another trademark or get-up.

The defendant had argued that CTM 2.534.774 protected only colour combinations where blue and silver were used in equal proportions, which was not the case for the defendant’s get-up.

The Supreme Court held that beverage cans are usually positioned on supermarket shelves in a way that allows consumers to see the word elements (and, therefore, the other trademark elements) on the front. Consumers would thus perceive the colour combination of the defendant’s product as shown above, and the colours blue and silver will appear in equal proportions. Therefore, they will associate it with the abstract colour trademark of the plaintiff.

In addition, the defendant used other elements of the plaintiff's marks - the colour yellow for the smiley and a red script. Therefore, despite the presence of additional elements (a yellow smiley instead of a yellow disc and different word elements), the contested get-up would, in the opinion of the Supreme Court, be attributed to Red Bull. The court considered that the reputation of Red Bull's famous family of marks would be exploited. The second defendant's appeal was thus rejected.

By deciding that the colour of the cans, rather than the word element, was the dominant element of the mark because of the position of the products on the supermarket shelves, the Supreme Court included the factual use of the get-up in the assessment of the likelihood of confusion. This is a new approach, which had hitherto only been considered by the Court of Justice of the European Union (ECJ) in the BUDWEISER case (Case C-482/09).

What is new in this decision is the fact that the court took into account elements of different trademarks when assessing the likelihood of confusion with a single mark, in order to conclude that there was an unlawful exploitation of an entire family of marks. This seems, at first glance, to contradict the requirement that the court must compare the overall impression conveyed by two marks. This, however, applies only to cases where the risk of confusion must be assessed, and not to the exploitation of a mark's reputation under Article 9(1)(c) of the Community Trademark Regulation (207/2009). In cases involving famous trademarks, a high risk of confusion is not a prerequisite and it suffices that, as a result of the reputation of the trademark, consumers may associate the contested sign with the famous mark (see Davidoff v Gofkid (Case C-292/00); Adidasstreifen II (Case C-408/01)).

There are serious doubts about the validity of the abstract colour trademark - CTM 2.534.774 - that 'won' this case. It is presently under attack by four independent complainants (Optimum Mark Sp zoo, Dariusz Michalczewski, Fundacja Darka Michalczewskiego and MWS Sp zoo Spk), which all argue along the same lines. Their main argument is that the description of the mark, which states that the colours blue and silver are used in a proportion of 50:50, leaves too much room for Red Bull to prevent other undertakings from using these colours in their products. Moreover, silver is the natural colour of an aluminium can, so the protection of that colour would harm other undertakings in the energy drinks sector and enable Red Bull to monopolise the colour unlawfully. In addition, the evidence submitted by Red Bull during the registration procedure was criticised for not clearly showing that the relevant public perceives the colour combination as referring to Red Bull. In fact, it was the entire trademark - including the famous word mark RED BULL - which was the subject of the surveys. Finally, the colour combination alone was allegedly never used to designate the goods concerned.

The cancellation proceedings at issue were started in 2011, so it remains to be seen whether CTM 2.534.774 would lose its protection retroactively. In that case, a renewal of the proceedings discussed in this article and a possible reversal of the judgment cannot be excluded.

The decision in the present case is also interesting from a procedural point of view. The Supreme Court, referring to the case law of the ECJ (Gut Springenheide (Case C-210/96) and Chiemsee (Joined Cases C-108/97 and C-109/97), held that a demoscopic expert opinion must be obtained only in exceptional cases - that is, where there is doubt as to the degree of reputation of a trademark. In cases where the judges can assess themselves whether a trademark is famous or not, there is no reason to mandate an expert opinion. The approach of the Supreme Court that a court expert opinion must be ordered whenever a party files a claim, which was expressed in two decisions (schladming.com (17 Ob 16/10t, January 18 2011); wagrain.at (17 Ob 15/11x, September 19 2011), was not followed.

Therefore, a court expert opinion on the issue of reputation would be necessary only in exceptional circumstances. Usually, the judge makes a decision on the basis of everyday experience or general rules established by the courts. This also means that the judge must answer the preliminary question of whether he or she is a member of the relevant public - a particularly sensible topic. Until now, only famous marks have been considered to be notorious by the courts without any further investigations (see kinder.at (Supreme Court, Case 4 Ob 156/02 y, July 16 2002)).

In EVA v EVE (Supreme Court, Case 17 Ob 21/10 b, April 12 2011), the second instance court first followed the private expert opinion, but reversed its judgment after the Supreme Court found private opinions to be inadequate to establish the reputation of a trademark. The plaintiff's argument (expressed in another extraordinary appeal) that a court expert opinion should be requested did not alter the decision.

In the present case, the Supreme Court seems to state the contrary when it refers to the possibility of tackling the judges’ opinion on reputation by ordering demoscopic expert opinions. This statement seems to refer only to cases where the judge does not order a court expert opinion.

It is bewildering that, although the Supreme Court held that expert opinions are not necessary in cases involving famous trademarks, it relied on a survey on the reputation of the blue and silver colour mark, which was filed, it seems, by the plaintiff.

The Supreme Court thus appears to contradict itself in this decision: under EVE v EVA, it should have asked a court expert to solve the question of reputation. It is highly doubtful - especially within the context of the fierce battle over the validity of CTM 2.534.774 - that this approach was appropriate. It should be noted that, under Article 99(1) of the regulation, the Supreme Court could not question the validity of CTM 2.534.774 in the instant proceeding.

Following the decision, it seems that expert opinions are now quasi obsolete when it comes to deciding the question of reputation, and that the parties are once again dependent upon the common sense of the judges. It remains to be seen whether the judges will further use their power of discretion, or whether they will rely - despite the Supreme Court's ruling in the present case - on the expertise of trained experts in the field of statistics. Opinion surveys and statistics are highly specialised areas combining mathematical principles and sociological theorems.

Deciding whether a mark is famous or not, without any factual background or expertise concerning the underlying concepts, seems to be highly dangerous. If they consider that private expert opinions are quasi obsolete, many judges will find that court expert opinions are not necessary and decide themselves whether a mark is famous; judges could also go the opposite way and always order an expert opinion. Arguably, the Supreme Court's viewpoint is not totally correct, since it prevents the parties from effectively showing that a certain trademark is famous among a certain public in cases where the judge has no insight into the relevant sector.