Plaintiff Kraft manufactures the Oreo sandwich cookies. It sued the retailers of sandwich cookies marketed under the name Go-Go's on the grounds of passing off and infringement of a well-known mark, seeking injunction and damages. 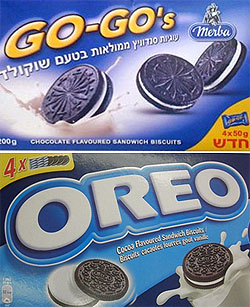 The defendants argued that their products not only bore the MERBA mark, but also had a different get-up due to, among other things, the differences in size and colour of the products. They further argued that pictures of black cookies filled with white cream, the colour blue, a background of splashing milk, the repetition of the letter 'O' and embossed logos were common in the trade both worldwide and locally.

The district court dismissed the action, holding that the get-up of the products was not sufficiently similar. The court observed that each party's product prominently bore their respective word marks (OREO and GO-GO'S) and differed in size, colour (the defendants' packaging was purple, while Kraft's packaging used shades of blue) and graphics (the number of  cookies was different and the defendants' packaging depicted a girl). It further found that the use of pictures of sandwich cookies against a background of splashing milk was common in the trade. The court noted that Kraft's consumer survey was conducted before the consumers were exposed to the defendants' product and, therefore, could not support a likelihood of confusion.

The court also dismissed Kraft's argument that the creation of initial interest sufficed for a finding of likelihood of confusion (where the products were placed side-by-side on store shelves). The court pointed out that, under the tort of passing off, consumers must be mistaken into believing that the defendant's product originates from the plaintiff. Here, a reasonable consumer would not associate Go-Go's cookies with Kraft or the Oreo brand. The court further held that the claim that the Oreo get-up was a well-known mark would not avail the plaintiff, as the similarity was not confusing. Finally, the court stated that little weight was to be given to the fact that both products depicted sandwich cookies against a background of splashing milk, as they both contained black sandwich cookies filled with vanilla cream.

On appeal, the Supreme Court held that the appeal had merit. On the court's recommendation, the parties reached a settlement whereby: