Supreme Court of Appeal: no passing off in STAR case

The packaging in both cases has white as the background colour and the writing and symbols in either green or red. In addition, both packages depict a red star. Images of the packages are depicted below: 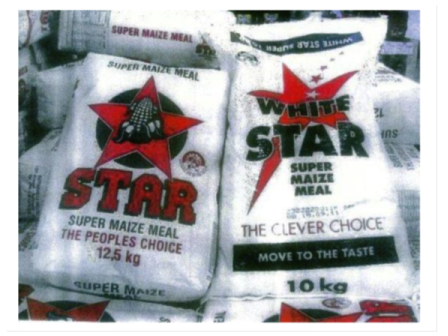 The appellant identified four major aspects of the get-up which it claimed would, in conjunction with one another, lead to deception of customers and confusion in the market place:

The respondent’s response, substantiated by evidence, was that the combination of the colours white, green and red in the packaging of super maize meal is common place and used by a number of prominent brands. It argued that the use of the name STAR, with or without a star symbol, was also common place.

For a party to show passing-off, it must prove the following three elements:

In respect of reputation, both the respondent and the court conceded that the appellant had acquired a reputation in the get-up of WHITE STAR super maize meal.

Regarding the element of misrepresentation, the court stated that misrepresentation is proved by showing a reasonable likelihood that members of the public may be confused by the get-up adopted by the respondent for its STAR product into thinking that it is WHITE STAR or related to WHITE STAR.

In deciding whether there was a reasonable likelihood of confusion, the court stated that:

“…the two products must not only be considered as they would appear if sold side-by-side, but also on the basis of their being displayed separately in separate premises. Allowance must be made for imperfect recollection on the part of the consumer.”

In this regard, the court considered that, while there were some similarities between the two get-ups, principally caused by the combination of a broadly white background with the symbols and lettering in red and green, the moment a customer saw a package the differences would become obvious and concluded that the differences were sufficient and obvious to hold that there would be no likelihood of confusion between the two.  The court referred in this regard specifically to the following differences:

The court also stated that, in assessing whether there is likelihood of confusion, consideration must be had to the value of the goods in question and the class of customers who will buy the goods and the circumstances in which such goods will be displayed for sale. In the given circumstances, the court found that maize meal is the most brand-loyal product in South Africa (as evidenced by market surveys) and consumers buying maize meal will ordinarily be looking for their “usual” brand as part of routine domestic shopping. They are more likely to take added care to ensure that they purchase the product they know and like.

On this basis, the court found that there could be no likelihood of confusion and the fact that the two products have been in competition with each other for almost a decade without any incident of confusion reinforces this view.

As the appellant could not show that there was likelihood of confusion, misrepresentation and prejudice were not established. Accordingly, the appeal was dismissed with costs.