The Irish Supreme Court in McCambridge Limited v Joseph Brennan Bakeries ([2012] IESC 46) has confirmed by a majority that the use by Joseph Brennan Bakeries of wholewheat bread packaging which was similar to the get-up of market leader McCambridge Limited was passing off, despite the presence of its own distinctive BRENNAN’S 'house' mark. The court reiterated the importance of first impressions and the manner of presentation of the particular product to the consumer. 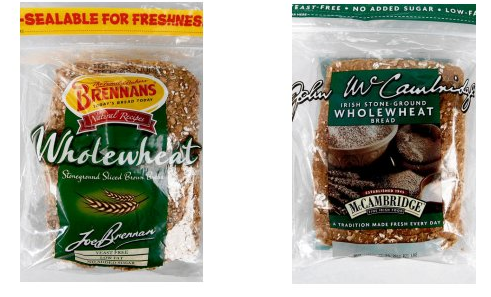 The majority of the court, led by MacMenamin J, paid particular attention to the supermarket method of sale of fast-moving consumer goods (FMCG), in contrast to the old-style grocery store with an assistant behind the counter.  The practical argument that bread purchasers would handle and examine the product to test its freshness was rejected, on the basis that the high turnover in the FMCG sector has rendered such examinations unnecessary or infrequent.

The majority also confirmed that even a collection of non-distinctive or generic elements can be protectable get-up under the law against passing off, if they are sufficiently distinct and identifiable. In this case, the elements included images of wheat, square resealable packaging and the colour green which was specifically noted to be in use by other players in the market and to indicate freshness. The similarities between the respective products, namely the nature of the wrapping and packaging and their shape, were held to go beyond the realm of mere resemblance into imitation.

The main issue at stake was whether the Brennan packaging was a misrepresentation. The court held that, in many instances, a trader’s name on a product, particularly if sufficiently large or prominent and well-positioned so as to be clearly visible on display, can be sufficient to distinguish the products, but that this must always be subject to the overall impression of the consumer created by the packaging. In this case, even reasonably prudent supermarket customers who entered the store with an intention to buy the McCambridge product and who had normal levels of attention could be confused into choosing the Brennan's product, as they would only engage in a momentary examination of the perhaps imperfectly presented product before selecting it. This conclusion was supported by the evidence of shoppers and marketing experts on consumer behaviour, as well as empirical evidence from the marketplace that the products can be presented in varying fashions, when the BRENNAN’S logo might become concealed or obscured. These features of supermarket retail practice could be equally applicable to many other FMCG products.

The dissenting opinion of Fennelly J held that a consumer could be confused only if he or she does not look at the front panel of the packaging at all and relied only on the general shape and size of the product, which are entirely generic features. Anyone who looked at the front of the packaging, which was the focus of the complaint and which bore the distinctive BRENNAN’S red and yellow logo, would not be confused. In his view, the High Court judge set the bar too low and this was a case of mere confusion rather than passing off, lacking the essential element of imitation of the quasi-proprietary interest of the plaintiff in the get-up.

In light of the majority decision on misrepresentation, Brennan was fighting a difficult corner as there was evidence of actual confusion by consumers and shopkeepers, and the majority held that the damage to reputation was sufficient to infer damage.

With this decision, the court has bolstered the arsenal of brand owners of FMCG goods sold in supermarkets, so that even use of a prominent house mark will not dispel confusion where there are similarities on an initial impression. It is also comforting that brand owners can rely on expedited proceedings in Ireland for urgent matters, with this matter progressing from the commencement of the proceedings to full trial, High Court decision and the hearing and decision in the Supreme Court appeal within 16 months in total.

This decision is the first from the Supreme Court to deal with passing off in some years and it also underscores the importance of registering trademarks for get-up and packaging elements to supplement this protection under the law against passing off. The bottom line remains that, if it is worth copying, then it is worth protecting - if you know which side your bread is buttered.