The Supreme Administrative Court of Finland has issued a precedential decision regarding the registration of the shape of a biscuit as a trademark (KHO 2013:94). The decision also dealt with the assessment of survey evidence concerning distinctiveness acquired after the application date.

The graphic representation of the mark consisted of a square with wavy edges and a film-like surface: 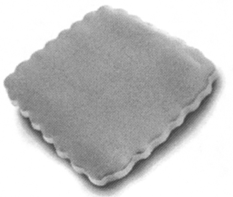 The trademark application was initially refused by both the Trademark Office and the Board of Appeal on the grounds that the mark was not inherently distinctive and had not acquired distinctiveness through use.

To prove that its mark had acquired distinctiveness, the applicant filed a survey that showed that 72% of the respondents recognised the biscuit based on its appearance. A significant part of the respondents - 36% - were also able to identify the name of the product in question as ‘Carneval’.

However, according to the office, the survey had been conducted a year after the filing date of the application, and was thus inadmissible.

On appeal to the Supreme Administrative Court, the central issues were:

The court first stated that a mark must not consist exclusively of a shape resulting from the nature of the goods themselves, which is necessary to obtain a technical result or which gives substantial value to the goods. In addition, it must depart significantly from the customary shapes of goods of that type in order to be perceived as a trademark by the relevant public. A shape that does not fulfil these criteria can, however, be registered if it is shown to have acquired distinctiveness through use.

Regarding the prima facie eligibility of the Carneval biscuit shape for trademark protection, the Supreme Administrative Court first found that the mark did not solely consist of the common shape of the goods in question. On the other hand, the shape was not inherently distinctive and could be protected only if it was shown to have acquired distinctiveness through use.

The court further ruled that the Trademark Office had erred in holding that the survey evidence was inadmissible. The admissibility of evidence post-dating the application date had previously been recognised in EU case law (eg, in the Aire Limpio case (C-488/06 P)). In Aire Limpio, the Court of Justice of the European Union had held that the fact that the data in question concerned a period subsequent to the date of filing of the application was not sufficient to deprive those data of their evidential force, as they enabled conclusions to be drawn on the situation as it was on the date when the application was filed.

Based on this case law, the Supreme Administrative Court ruled that the market survey was admissible in this case, even though it had been conducted a little over a year after the application date. According to the court, there was no indication that the level of awareness shown by the survey would be the result of any particular marketing efforts made during that year.

There was also no evidence of any significant changes in the Finnish biscuit market or other circumstances that could justify the conclusion that the awareness of the trademark in question would have changed in any meaningful way between the application date and the time of the survey.

The Supreme Administrative Court concluded that the shape of the Carneval biscuit could be registered as a 3D trademark, as it had acquired distinctiveness before the application date due to its longstanding and extensive use.