Superbrand plans gTLD launch, but has it done its trademark homework? (updated)

Print article
(This blog has been updated - the new information is italicised below)
On Friday the deadline to register for access to the TLD Application System passed (with 839 registered users as of March 25). As expected, there was a late rush to sign up and while applicants are keeping their cards close to their chests, plans for an ambitious gTLD superbrand have been revealed. But will the brand owner run into trademark troubles before the site even gets off the ground?

In a twist to the usual .brand approach, whereby a corporate applies for its own brand as a TLD, WTR has learnt that plans are afoot for a brand to launch itself as a gTLD. The proposed site, .ELLEN, will seek to leverage the platform a gTLD provides to commercialise branded products around the ‘Ellen’ name.

Commenting on the plans, Jeff Neuman, vice president of business affairs at NeuStar Inc, told WTR:“As you can imagine, over the past year we have talked to a large number of potential applicants for new gTLDs, but it wasn’t until .ELLEN came along, that I truly saw how innovative and game-changing the new gTLD process could be.”
However, rumours abound that the brains behind the proposed brand are now in a rush to meet the April 12 gTLD application deadline and an obvious question to pose is how much homework they have done on the trademark issues surrounding such a launch.

"While Ellen has a fantastic project in her hands, we were surprised to learn that she hasn't picked a registry provider yet, a mere ten days before the close of the application process," commented Jean Christophe Vignes of OpenRegistry. "Like many applicants, she must have thought the process will be delayed yet again and there was no need to rush but it is really happening now. We would love to help .Ellen grow and show the world it is a lot more than a tantrum."

Asked for reaction, Russell Pangborn, associate general counsel, trademarks at Microsoft, said: “Although I can’t comment on this particular application, it is important that anyone applying  for a gTLD makes sure they have created a thought-out business plan, rather than just doodled a sketch they are now following."

While the presumption is that the .ELLEN owners will have taken legal advice, it could find itself subject to challenge from other rights holders. Ellen Shankman, an IP lawyer in Israel and former INTA Board member, has also signalled her intent to contest the domain: "It will be most unfortunate if we have to go to auction over the .ELLEN TLD, given my obvious prior rights, but we wish to warn potential applicants to anticipate heavy bidding."

On the subject of trademark advice, David Taylor, a partner in the international law firm of Hogan Lovells, heading up their new gTLD and domain name practice, queried the approach being taken, stating: ‘They need to make sure they aren’t taking an immature approach to trademark law, and I would be keen to know where they are getting their advice from?” Brian Winterfeldt, a partner at Steptoe a Johnson, also advising in this area, echoed this sentiment:  'Someone is advising them and no one knows who it is, this could be scary'.

Such advice is crucial not only with respect the .ELLEN gTLD itself, but for rights holders who have concerns of second level infringement. Taylor adds: “I will be keen to see what Right Protection Mechanisms will be put into place by this applicant. On the IRT we sought to create a workable tapestry of solutions. Hopefully these will be incorporated by applicants such as .ELLEN rather than a set of mechanisms which come apart at the seams like an old teddy bear."

Second level protection mechanisms would be a sign that the applicant is a responsible actor in the gTLD environment. However, other indicators would suggest otherwise. WTR has learnt that the applicant for .ELLEN voted at a recent ICANN board meeting on new gTLDs but as yet does not hold an official ICANN position. Should these allegations be proven, it will cast fresh doubt on the individual’s suitability to oversee a branded gTLD and commercially gain from a system she has effectively gamed. Stéphane Van Gelder, chair of ICANN's GNSO Council, reacted angrily to the allegation: "When I learned of this attempt to hijack a legitimate vote, I was shocked. Especially as it appears the person behind this attempt was posing as an innocent-looking, almost child-like individual. Process is what makes ICANN truly great and our processes should not be compromised by this type of behaviour."

However, Steve Crocker, chair of the ICANN Board, refutes any suggestion of impropriety, arguing that .ELLEN should instead be viewed as an example of best practice in a multi-stakeholder environment: "Never have I seen a more compelling case for brand protection .ELLEN clearly fits into our 'bottom up' philosophy."

Lesley Cowley, chief executive at Nominet UK and the chair of ICANN's ccNSO Council, also voiced support for the applicant, noting: “It is always good to meet new female participants in ICANN policy making and this applicant has been key in taking cries for new gTLDs to a new level.”

WTR is due to interview the applicant for .ELLEN later today and will update this article as more information is obtained.

WTR has obtained an exclusive interview with the applicant behind the .ELLEN gTLD application, who revealed the lengths she went to keep her plans secret. While attending ICANN meetings, she registered under the company name ‘.baby’, a clever ruse to ensure cybersquatters didn’t learn of her plans and seek to register .ELLEN to capitalise on her planned superbrand. 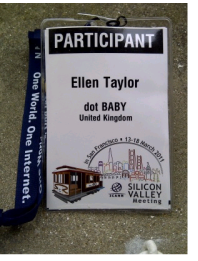 However, this again suggests she hasn’t fully got to grips with the reality of gTLDS, with many commentators suggesting the second level is where infringement is most likely. The lack of trademark savvy becomes even more shocking with the revelation that her father is none other than Hogan Lovells’ David Taylor.

Ellen Taylor (pictured below) insists she will push on with her plans despite suggestions that the whole story might all be an elaborate April Fools joke. WTR will follow her efforts to monetise the site by launching a branded fashion line. 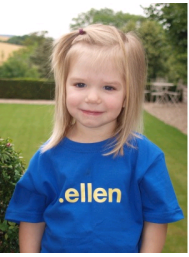