The Jiangmen Municipal Administration for Industry and Commerce (AIC) has recognised that the colour combination of orange and grey used by Andreas Stihl AG & Co KG for its chainsaws was a “specific decoration of a famous commodity”.

Stihl manufactures and sells chainsaws for forestry and garden maintenance, as well as the construction industry. Since 1971 Stihl has been the most popular chainsaw brand in the world.

In 1972 Stihl changed the colour of all its products to a colour combination of orange and grey, as shown below.

In 2013 Stihl discovered that Jiangmen Kings Power Machinery Co Ltd was producing and offering chainsaws with the same orange and grey colour combination. In August Stihl filed a complaint before the Jiangmen Municipal AIC on the ground that such unauthorised use of the colour combination constituted unfair competition. The AIC inspected Kings' premises and found 253 chainsaws using a colour combination that was very similar to Stihl’s, as shown below. 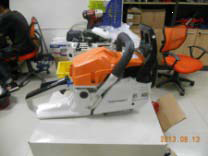 In September 2013 the Jiangmen Municipal AIC issued a decision (Jiang Gong Shang Chu Zi No (2013) 28) recognising that Stihl’s orange and grey colour combination was the "specific decoration of a famous commodity", and holding that Kings' unauthorised use of such colour combination constituted unfair competition. The AIC ordered Kings to stop this illegal act and to eliminate any adverse effects. The AIC also confiscated the income obtained through this illegal act and imposed a fine on Kings.

Article 5(2) of the Anti-unfair Competition Law of China provides protection against passing off of trade dress:

A colour combination can be regarded as a “decoration of goods”. Article 3 of the "Regulation on the Prohibition of Unfair Competition through the Unauthorised Use of the Unique Name, Package or Decoration of Another's Famous Commodity provides" that 'decoration' refers to the "words, pattern and colour, as well as the combination thereof, attached to the goods or package in order to identify or beautify the goods".

In the present case, Stihl was able to prove that its products enjoyed a high reputation in the power tool industry, and that the orange and grey colour combination is widely recognised by peer companies and consumers in China as being associated with Stihl. Therefore, the abovementioned conditions for obtaining protection under the Anti-unfair Competition Law were met.