In Margarete Steiff GmbH v Office for Harmonisation in the Internal Market (OHIM) (Cases T-433/12 and T-434/12), the General Court has confirmed two decisions of the First Board of Appeal of OHIM finding that two Community trademark (CTM) applications made by Margarete Steiff GmbH were devoid of distinctive character.

On October 12 2012 Steiff filed CTM applications for the following marks, both covering “hard and soft fabric stuffed animal figures made ​​of felt, fur, alpaca wool, mohair or polyester that have ears” in Class 28 of the Nice Classification. 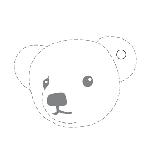 Description: “It is a position mark: trademark protection for a shiny or matt, round metal button is claimed, which is mounted in the central region of the ear of a soft toy. The knob is significantly smaller than the ear, so that the ear is protruding on each side of the button. The shape and size of the stuffed animal's ear are variable and not part of the protective claim. The dotted lines are not part of the brand and are only intended to show the position of the mark on the goods. The animal head shape illustrated by the dotted lines is an example only and not intended to limit the scope of the mark to this animal head shape.”

Description: “It is a position mark: trademark protection for a rectangular, elongated fabric flag is claimed, which is attached by a glossy or matte, round metal button in the middle of a stuffed animal's ear. The flag is narrower than the ear, but extends longitudinally beyond it. The button is narrower than the flag, which protrudes on the sides. The shape and size of the stuffed animal's ear are variable and not part of the protective claim. The dotted lines are not part of the brand and are only intended to show the position of the mark on the goods. The animal head shape illustrated by the dotted lines is an example only and not intended to limit the scope of the mark to this animal head shape.”

Both marks were refused registration by the examiner and the Board of Appeal of OHIM on the basis that they were devoid of distinctive character, and could not act as an indication of a particular commercial origin to the average consumer, which was deemed to be the general public. Steiff appealed to the General Court against both decisions, on the basis that OHIM and the Board of Appeal had erred in finding that both marks were devoid of distinctive character.

The General Court dismissed the argument advanced by Steiff that the positioning of a button, or of a label and a button, on the ear of a soft toy would indicate the origin of the product to consumers. In making this decision, the court agreed that the distinctiveness of the mark should be considered from the perspective of the average consumer of the products covered by the applications, which was an average member of the general public, with a moderate level of attention.

The court further agreed with OHIM that buttons and labels are items that are usually affixed to soft toys, and that the average consumer would expect such items to be attached to the soft toy in numerous different positions. The average consumer would regard the positioning of a button, or a label affixed by a button, on the ear of a soft toy as a merely decorative or functional aspect of the product, and would not identify either as an indication of commercial origin. This was reinforced by the fact that the button and the label were both of a standard size and shape, and did not deviate from the normal configuration of such items in any way. The court considered that the button, or the button and label, would be perceived by consumers as being part of the product covered by the mark applied for, and that the positioning of these items in the ear of a soft toy, whilst not something done by other manufacturers, was not sufficiently far removed from the norm in the industry to be viewed as an indication of origin by the average consumer; both would be viewed as part of the product in question.

Insofar as the mark including a label element was concerned, the General Court found that labels usually have a function, and convey information to consumers about the product. Consumers do not expect labels to be indicators of commercial origin. Steiff argued that labels providing information to consumers would not be affixed by a metal button, as consumers would dispose of a label that contained information regarding the product. The court found this argument to be irrelevant, indicating that manufacturers may wish to affix informative labels to their products firmly, by using a metal button. It viewed the label as a commonly used means of conveying information regarding the product to the consumer, and not as an indication of origin. This was particularly pertinent given that, in photos showing use of the mark submitted by Steiff, the label element of the mark applied for clearly included information regarding the branding of the mark. Steiff argued that use of the 'Steiff' and 'button in ear' branding was of the sort that increased the distinctiveness of the mark applied for; however, the court dismissed this argument on the basis that these elements were not included in the graphic representation of the mark applied for, and therefore were irrelevant.

The General Court dismissed further arguments that the button, and the button and label, were made of different materials than the soft toys to which they were applied. It found that this did not materially alter the fact that the average consumer would still see these items as being decorative or functional, and not as an indication of commercial origin; given that the mark applied for was the positioning of these items, the court did not see how this argument could be relevant to demonstrate that the positioning of these items was sufficiently distinctive for trademark registration.

On this basis, the General Court confirmed OHIM’s decision to refuse registration of the mark.

This decision highlights the difficultly of registering more unusual marks, and the high threshold that must be fulfilled for a three-dimensional, or other, more unusual mark, to be capable of fulfilling the requirement that a trademark must clearly act as an indication of origin to the average consumer. In particular, it is clear that the goods or services for which a mark is applied are of paramount importance when determining its distinctiveness.

However, this decision will unlikely be the end of the position mark, as numerous position marks have made it successfully into the CTM register. For Steiff, it will be re-assuring that the German Patent and Trademark Office, and a significant number of national offices in other countries that Steiff designated in two international registrations, have registered Steiff’s position marks on the basis of inherent distinctiveness. It will be interesting to see whether Steiff will submit an appeal to the Court of Justice of the European Union.