In Starbucks Corp v Wolfe’s Borough Coffee Inc (No 12-364-cv, November 15 2013), the US Court of Appeals for the Second Circuit has considered whether the commercial use of the CHARBUCKS marks resulted in “dilution by blurring” of the famous STARBUCKS mark under the Federal Trademark Dilution Act 1995 (FTDA), as amended. 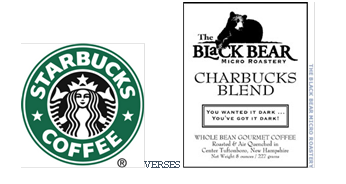 Since 1971, plaintiff Starbucks has grown into a global purveyor of specialty coffee and coffee products with over 8,000 retail locations worldwide and revenues in excess of $5 billion. It has devoted time, effort and money in successfully advertising, promoting and policing the famous STARBUCKS marks. In 1997 defendant Black Bear developed a coffee blend named Charbucks Blend, and it now also sells a dark-roast coffee called Mister Charbucks or Mr Charbucks (the CHARBUCKS marks).

In 2001 the plaintiff sued for trademark “dilution by blurring” under the FTDA in the New York Federal District Court. At the 2005 bench trial, the defendant’s founder testified that the term 'Charbucks' had previously been use by the Boston company Coffee Connection and that, in developing the CHARBUCKS marks, he meant to evoke an image of dark-roast coffee of the type offered by Starbucks.

At trial, the plaintiff introduced a telephone survey conducted by Mr Mitofsky, which found that 30.5% answered 'Starbucks' while 9% answered 'coffee' when asked: "What is the first thing that comes to your mind when you hear the name 'Charbucks'?". Only 3.1% responded 'Starbucks' and 1.3% responded 'coffee house' when asked: "Can you name any company or store that you think might offer a product called 'Charbucks'?". The more popular responses received include 'grocery store', 'discount store' and 'restaurant'. Mr Mitofsky concluded that the number one association of the name Charbucks in the minds of consumers is with the brand Starbucks. [One may speculates that the plaintiff felt that this survey was conclusive on the issue of likely and actual association and should have been afforded great weight by the court.]

Prior to trial, in the 2003 case of Moseley v V Secret Catalogue, the US Supreme Court had interpreted the FTDA to require objective proof of actual injury to the economic value of a famous mark (as opposed to a presumption of harm arising from a subjective "likelihood of dilution" standard) for relief thereunder. This standard for relief led to a 2006 amendment of the FTDA.

In the present case, in December 2005 the district court’s opinion found neither actual dilution, which would establish a federal trademark law violation, nor a likelihood of dilution under New York State law and denied injunctive relief.

The plaintiff appealed the decision and, while the appeal was pending, Congress passed the Trademark Dilution Revision Act 2006 (TDRA). The TDRA legislatively overruled the evidentiary standard for relief in the Moseley case. Under the TDRA, the owner of a famous mark seeking an injunction must prove only that the defendant’s mark “is likely to cause dilution... of the famous mark, regardless of the presence or absence of actual or likely confusion, of competition, or of actual economic injury”. The TDRA further redefined 'dilution by blurring' as an association arising from the similarity between a mark or trade name (CHARBUCKS) and a famous mark (STARBUCKS) that impairs the distinctiveness of the famous mark. The TDRA added six non-exclusive factors for trial consideration:

In view of this change in the governing law, and in light of the trial court’s holding that substantial similarity between the marks was required and the opinion’s suggestion that the district court may have placed undue significance on the similarity factor in determining the likelihood of dilution issue, the Court of Appeals for the Second Circuit vacated the judgment and remanded the case for further proceedings (Starbucks II (2d Cir 2007)).

On remand, after an analysis of the blurring claim under the TDRA, the district court ruled against the plaintiff, finding on balance that the record was insufficient to demonstrate the requisite likelihood that the association arising from the similarity of the core terms is likely to impair the distinctiveness of Starbucks’s mark, particularly requiring “bad faith” evidence by defendant, considering the absence of actual or likely confusion as support for the finding (Starbucks III (SDNY 2008)). The plaintiff’s second appeal alleged error. The Second Circuit concluded that the district court had erred by requiring “bad faith” and by relying on actual or likely confusion reasoning in interpreting the TDRA. Again the case was remanded to the district court (Starbucks IV (2d Cir 2009)).

In the second remand, the district court acknowledged that TDRA factors 2 through 5 favoured Starbucks, but that factors 1 and 6 did not. It further found that the actual association factor (factor 6) weighed “no more than minimally” in the plaintiff’s favour. After balancing all TDRA six factors, it held that the plaintiff had failed to meet its burden of showing that it was entitled to injunctive relief.

The plaintiff appealed for the third time in 2012, challenging both:

As to the standard of review, the Second Circuit noted that it reviewed the district court’s determinations in this third appeal (on the balance of the six factors) for “clear error” and “de novo”. It noted that factual findings will not be disturbed unless, on the entire evidence, the court is left with the definite and firm conviction that a mistake has been committed.

Turning to the challenge that the district court had erred in its holding of minimal similarity and weak association between STARBUCKS and CHARBUCKS, the Second Circuit noted that, in its 2009 decision as to the first factor (the degree of similarity between the marks), the district court had not clearly erred in finding that the CHARBUCKS marks were minimally similar to the STARBUCKS marks. It held that the plaintiff had misinterpreted the scope of its 2009 ruling and in the third appeal had advanced no compelling reason for the Second Circuit to revisit that prior ruling on the issue of similarity. The law of the case ordinarily forecloses relitigation of issues expressly or impliedly decided by the appellate court.

In affirming the district court’s holding, the Second Circuit stated:

“Although the three factors of distinctiveness, recognition and exclusivity favour Starbucks, [we] agree… [they] do not overcome the weak evidence of actual association between the CHARBUCKS and STARBUCKS marks. Ultimately what tips the balance in this case is that Starbucks bore the burden of showing that it was entitled to injunctive relief on this record. Because Starbucks’ principal evidence of association, the Mitofsky [telephone] survey, was fundamentally flawed, and because there was minimal similarity between the marks at issue, we agree with the district court that Starbucks failed to show that Black Bear’s use of its CHARBUCKS marks in commerce is likely to dilute the STARBUCKS marks.”

Starbucks has 30 days from November 15 to appeal to the Supreme Court.