Print article
Japan
Legal updates: case law analysis and intelligence
The IP High Court has reversed a trial decision in which the Patent Office had rejected the registration of a three-dimensional (3D) trademark consisting of the bottle used for Jean-Paul Gaultier Classique perfume products. The products are manufactured and sold by Beauté Prestige International (BPI), which had sought registration for "beauty products (cosmetics), soaps, perfumery [and] cosmetics". The court ruled that although the mark was descriptive under Article 3(1)(3) of the Trademark Law (127/1959, as amended), it had obtained the distinctiveness required under Article 3(2) of the law.

"in the case of a trademark that consists solely of a mark indicating in a common way the place of origin, place of sale, quality, raw material, efficacy, use, quantity, shape (including packaging shape) or price of the goods, or the method or time of manufacturing or using them; or the location of provision of services, quality, articles for use in such provision, efficacy, use, quantity, modes, price or the method or time of the provision of services."

In the present case, BPI manufactured and sold cosmetics under the Jean-Paul Gaultier brand. It filed an international application for a 3D trademark for the following shape in Class 3 on April 28 2006 (ie, the date of designation for Japan): 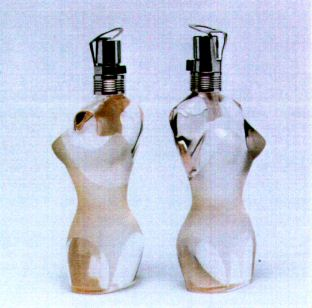 The examiner issued a rejection notice on June 27 2008. BPI objected, filing a petition for a trial hearing on October 7 2008. On July 15 2010 the Patent Office issued a trial decision that confirmed the original rejection and dismissed BPI's petition.


On the question of the applicability of Article 3(1)(3), the Patent Office held as follows:
In this case, the bottle was in the shape of a woman's neck and torso, the upper part of which, in metal, was readily recognisable as the spray mechanism and cap. The lower portion, from the neck down, was made of pink, semi-transparent, half-frosted glass. This section could be easily identified as containing the liquid. In relation to the designated goods, it was recognisable as a type of container holding liquids such as "perfumes and toilet lotions". The court found that the bottle, if used for the designated goods, might simply be regarded by vendors and consumers as a container holding the goods. 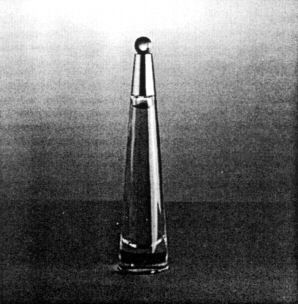