Shot down: rifle barrel configuration found to be functional and unregistrable

In In re ER Shaw Inc (Serial No 85/797,528, September 29 2015), the Trademark Trial and Appeal Board (TTAB) of the US Patent and Trademark Office has held that applicant ER Shaw Inc’s proposed rifle barrel product configuration was functional and unregistrable as a trademark, focusing on the applicant’s ownership of, and claims in, a utility patent covering the elements of the proposed mark, and advertising materials touting the advantages of those features.

The applicant applied on December 7 2012 to register “a three-dimensional configuration of external helical fluting around a gun barrel” as depicted in the drawing below, in connection with “rifle barrels; rifles” in Class 13 of the Nice Classification. 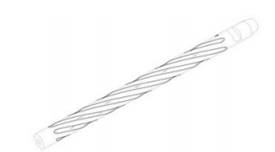 The TTAB first clarified that the applicant’s claimed mark consisted solely of the external features of a helically, or spiralling, fluted rifle barrel, and did not include any internal characteristics of the barrel design. Under the Supreme Court’s decision in Qualitex Co v Jacobson Prods Co, a product feature is functional (and therefore, cannot serve as a trademark) if it is essential to the use or purpose of the article or if it affects the cost or quality of the article (514 US 159 (1995)). As the court explained in Qualitex, allowing for the protection of a functional feature through the potentially perpetual vehicle of trademark law, rather than the limited time frame of patent law, would be anti-competitive. The TTAB uses the four-factor test set forth in In re Morton-Norwich Prods Inc (671 F2d 1332 (CCPA 1982)) to determine whether a proposed product configuration is functional:

In its examination of the first Morton-Norwich factor, the TTAB first noted the applicant’s ownership of both a utility patent and a design patent relating to the barrel configuration mark. The applicant’s utility patent covers a 'fluted gun barrel' and includes both the internal and external fluting grooves in every one of its claims, leading the TTAB to conclude that the barrel configuration mark design was an “integral part” of the invention and its self-described objective of creating a lighter, stiffer and heat-diffusing rifle barrel.

The applicant argued that its ownership of a design patent covering an “ornamental” design of a gun barrel gave rise to the presumption that the barrel configuration mark was not functional and outweighed the content of its utility patent, but the TTAB countered that the mere existence of a design patent is not dispositive. In particular, the weight accorded to the existence of a design patent may be overtaken by other evidence during the TTAB’s review of the patents, particularly the substance of the claims and any discussion of the invention’s utilitarian advantages in a utility patent. In this situation, the TTAB decided that the existence of the applicant’s design patent and its description of the design as “ornamental” were outweighed by the description of the same product configuration’s significant utilitarian features in the utility patent, tipping the balance of this first factor in favour of a functionality finding.

For its analysis of the second Morton-Norwich factor, the TTAB noted that the applicant touted on its website that the barrel configuration mark served to provide additional surface area for improved cooling, improved barrel harmonies, and counter-action of rotational torque for greater shot consistency, and that the applicant even specified that its “patented helical fluting” provided up to a 30% improvement in rigidity. The TTAB then found that, although other gun manufacturers produce non-fluted rifle barrels and non-helical fluted barrel designs, the applicant’s barrel configuration mark design would be considered the most desirable option for a rifle barrel because of the utilitarian advantages stemming from its spiral fluting. Given that the relevant question in this third factor is the availability of alternative designs that work equally well as the claimed mark, the TTAB held that this factor also weighs in favour of functionality. Finally, the TTAB accepted the applicant’s arguments that its barrel configuration mark was more complex and expensive to produce as compared to other external fluting barrel designs, but decided that the fact that other designs are simpler and cheaper to make did not weigh heavily in the applicant’s favour.