Shifting markets and brand positions in a transforming industry

Putting the automotive industry under the magnifying lens reveals that a shift in focus from West to East is beginning. Meanwhile, the proliferation of driverless technology is leading to a rise in trademark filings.

A deep dive into the trademark landscape of the automotive sector shows that although Germany remains home to the most valuable brands in this space, Chinese companies are catching up. At the same time, there has been a surge in trademarks relating to autonomous vehicles.

There are few industries undergoing as dramatic a shift as the auto sector. From the rise of self-driving technology and telematics to significant structural shifts in the market and consumer behaviours, automakers are having to sharply refine their strategic – and branding – tactics.

Although the industry remained on track in 2017 to achieve record auto sales globally for the eighth year in a row, there are some concerns that growth will slow in 2018. Major markets such as the United Kingdom and the United States have experienced a decline in sales for the first time in years. The United Kingdom saw sales drop for the first time in six years, with demand for diesel cars plummeting by 17%. This has been precipitated by Brexit-induced rises in taxes and car prices, as well as confusing government policy in reaction to the global diesel emissions scandal. Meanwhile, the United States experienced its first dip in car sales since 2009.

While the auto sector is still in robust health overall, car manufacturers cannot afford to rest on their laurels, especially those in developed markets (many of which have seen or will see contraction, while emerging markets expand to take their place). In addition, brands will have to adapt against a backdrop of increasingly disruptive technologies (which we will explore below) and ever-changing consumer demands. For example, drivers in the United States are holding onto their cars longer due to increased reliability and buying more expensive models, such as crossover cars and sports utility vehicles (SUVs), in place of passenger cars.

Indeed, as noted by Brand Finance in its latest auto industry report (see http://brandfinance.com/images/upload/brand_finance_auto_tyres_report_2018_locked_1.pdf), SUV sales have led to a sharp spike in revenues for many of the leading brands, with SUVs now representing 34% of all new car sales globally at 28 million units. The disproportionate share of sales by SUVs, which grew by 6% between 2016 and 2017, has been attributed to low gas prices and growing millennial families. Although a focus on SUV production may have its risks, such as if gas prices rise, this has not deterred manufacturers from trying to capitalise on this development. Many luxury brands launched a number of new products in the high-end SUV market last year, while other luxury names such as Rolls Royce and Aston Martin are also looking to launch their own SUVs in 2019.

Looking to the future, the auto sector will need to adapt to a number of potentially game-changing developments, including the proliferation of self-driving technology and the growing popularity of electric vehicles and car sharing.

Manufacturers across the board have produced a range of new environmentally friendly models to capitalise on the desire of consumers to ‘go green’, which also explains why the demand for vehicle sharing and electric cars remains on the ascendant.

Technology relating to the Internet of Things (IoT), big data and an increased emphasis on telematics will have a profound effect on the auto and insurance industries – it is predicted that they will lead to safer drivers, lower premiums and higher customer satisfaction rates. This will, in turn, have a knock-on effect on the distribution of trademark filings, with Nice Class 9 (computer software and hardware) expected to become increasingly important for players in both industries.

With Google and Uber leading the way in self-driving technology, traditional car brands will also be threatened by tech firms encroaching on their market share. However, some major automotive players (eg, BMW) are already well-positioned to take on this challenge with other car manufacturers expected to join the fray in the coming years.

Figure 1: Number of filings globally in Class 12 with the terms ‘autonomous’ or ‘driverless’

We may not see fully autonomous vehicles on the road for a while yet – although some have set ambitious plans for as early as 2021 – but rights holders are already getting their foot in the door. As seen in Figure 1, applications in Class 12 (vehicles) with the terms ‘autonomous’ or ‘driverless’ have exploded since 2015, according to data from trademark searching and watching platform CompuMark. This is in contrast to falling trademark applications in general among the major automotive manufacturers, as will be discussed later. In 2017 the number of applications with either term broke the 1,000 barrier mark. 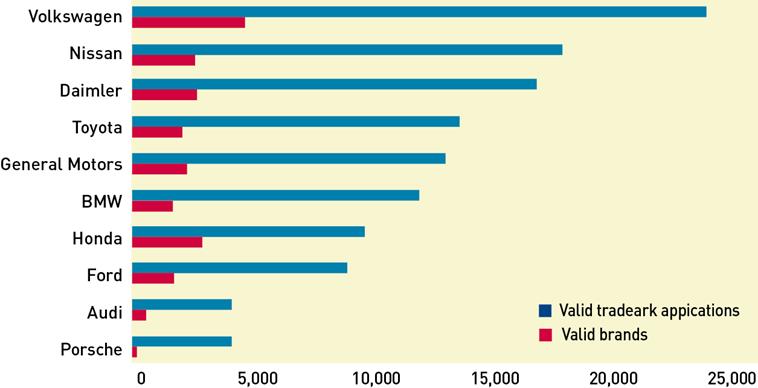 Mercedes-Benz races past Toyota and BMW

Turning to the leaders in this space, the best auto brands have generally enjoyed modest growth, with seven of the top 10 brands having increased in value over the last year.

Following its 24% rise in brand value, Mercedes-Benz has overtaken Toyota and BMW to become the most valuable car brand in the world. Brand Finance credits its success to the introduction of a new line of vehicles, including a reinvigorated SUV range, and technological developments that have allowed it to distance itself from traditional internal combustion engines. Conversely, former top brand Toyota suffered a slight drop in brand value, principally due to a struggling position in China.

Figure 4: Number of filings globally by the top 10 auto brands 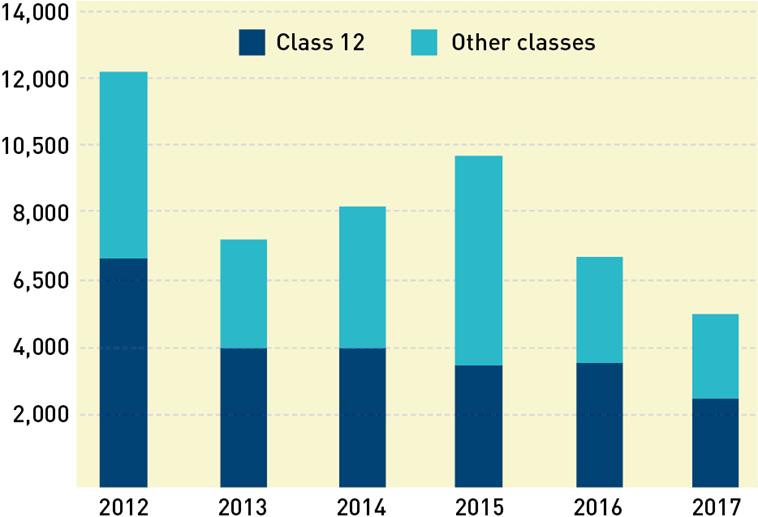 Porsche’s rocketing growth has been particularly noticeable: its 54% increase in brand value (to just over $19 billion) followed a 169% surge the year before. In 2016 it enjoyed record-breaking sales and expanded in key markets; meanwhile, in 2017 it successfully launched its new hybrid model, the Panamera 4 E-Hybrid.

The total size of the trademark portfolios of the top 10 brands, based on the brand owner, can be seen in Figure 3, with data provided by trademark management platform TrademarkNow. The Volkswagen Group owns by far the largest portfolio, with a long list of heavyweight brands under its belt, including Audi, Bentley, Bugatti, Lamborghini, Porsche, Skoda and Volkswagen, among others. As such, it is ranked as Brand Finance’s most valuable portfolio in its auto industry report at $75.8 billion. Brand Finance also notes that the Volkswagen Group recognises that its individual brands benefit from being part of a larger family of brands and has plans to leverage that further in the future.

Looking outside of the top 10 brands, Aston Martin and Tesla have demonstrated robust growth (up by 268% and 106% respectively). The former was the fastest growing auto brand last year, having enjoyed its first year of profit in over a decade – the devaluation of the pound sterling as a result of Brexit has allowed the luxury sports car manufacturer to maintain its level of quality while lowering costs for international customers. The improving perception of Tesla’s brand is based mostly on its keen corporate vision and future: despite severe doubts swirling around its manufacturing capabilities and comparatively low car sales to the other automotive giants, Tesla’s market capitalisation surged to new heights last year.

In terms of trademark filings among the top 10 auto brands, total filings – divided by Class 12 (vehicles) and all other classes – can be seen in Figure 4. There has been a perceptible decline in total application numbers in the last three years and a decrease in Class 12 filings that stretches further back.

Meanwhile, the chart in Figure 5 shows a full breakdown of the spread of filings by the leading brands by Nice Class in 2010 compared with 2017. As explained previously, the sharp rise in Class 9 (computer software and hardware) and Class 42 (science and technology services) should not come as a surprise, given the growing focus on digital solutions and new technologies. However, there has also been a noticeable increase in Class 35 (advertising and business) and Class 39 (transportation and storage) in the last seven years.

Figure 5: Percentage of filings by the top 10 auto brands by trademark class

Germany remains the top country by auto brand value, with half of its top 10 brands being from the automotive sector. In the aforementioned Brand Finance report, the aggregated value of German brands across the 100 leading global auto companies comes to just shy of $160 billion, representing 34% of the total value.

It is also interesting to note that the total value of Chinese car brands today represents 7% of the total of the chart in Figure 6. Just three years ago this figure was 4.5%. For comparison, the total value of the leading Chinese car brands has increased by 80% between 2015 and 2018, while for German brands it has only increased by 32% – meanwhile, the total brand values for the United States and Japan in absolute terms have actually decreased. 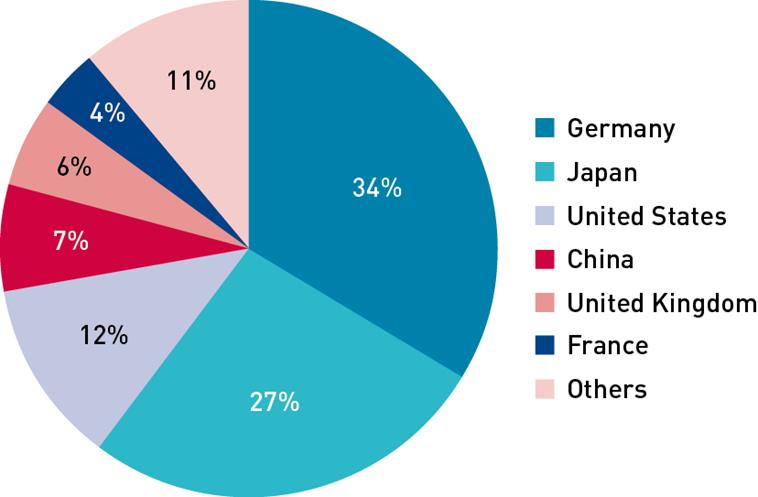 Indeed, Chinese brands have experienced incredibly strong growth in 2017. After Aston Martin, BYD was the quickest growing brand in the report, having leapt by 211% to $3.4 billion, while Haval also jumped an impressive 124% to $6.8 billion. However, so far, the success of Chinese brands has been limited to the domestic market, as these brands remain largely unknown to Western consumers. Brand Finance points out that leading Chinese auto manufacturers will increasingly be looking to leverage their robust brands outside of the Chinese market and may do so by acquiring Western brands to improve their positions internationally.

In addition, the vast majority of filings in Class 12 comes from China (see Figure 7). While Class 12 applications have remained mostly stagnant in the United States, Europe and Japan (filings from Ikuhiro Ueda – the most prolific filer in Japan – are excluded so as not to skew the graph), filings continue to soar in China, as has been the case in the preceding five years. 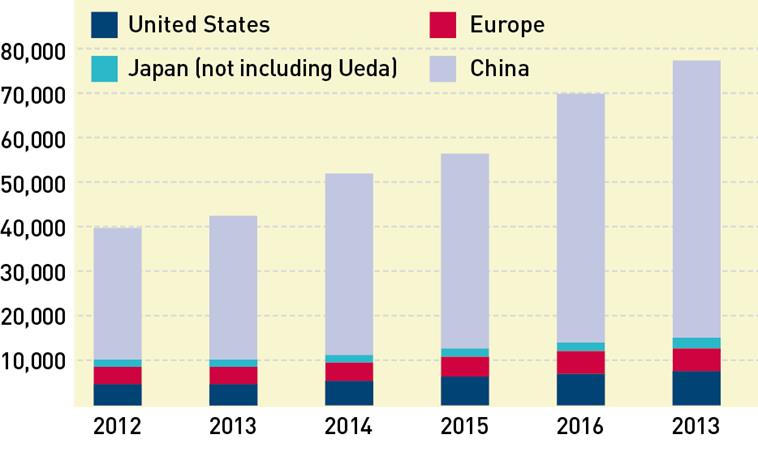 Although global auto sales have seen an unprecedented eight consecutive years of growth, now, more than ever before, auto brands need to strategically position themselves for the future. What consumers want, where cars are being sold, and how cutting-edge technology will be further utilised are just a few of the questions that manufacturers should be asking themselves as those in the industry begin to enter an entirely new playing field.