In Unión de Cervecerías Peruanas Backus y Johnston SAA v Office for Harmonisation in the Internal Market (OHIM) (Case T-323/11, July 12 2012), the Sixth Chamber of the General Court has upheld the refusal to register a three-dimensional (3D) mark, the relevant parts of which are shown below, as a Community trademark (CTM) for beer: 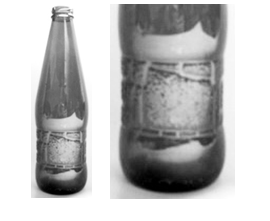 The application (Application No 8.592.081), filed by Unión de Cervecerías Peruanas Backus y Johnston SAA, consisted in the shape of an amber-coloured glass bottle, with a wide base and a long, narrow neck. The central part is narrower and bears an engraving. The application covered “beer” in Class 32 of the Nice Classification.

The OHIM examiner, the Board of Appeal and, subsequently, the General Court, considered that the mark was devoid of distinctive character under Article 7(1)(b) of the Community Trademark Regulation (207/2009) - that is, it was not able to distinguish the commercial origin of the goods that it intended to identify.

In its decision, the General Court first set out general considerations concerning the distinctiveness of 3D trademarks in light of the case law of the Court of Justice of the European Union:

The applicant argued that the trademark was distinctive for the following reasons:

The General Court held that the shape at issue, taken as a whole, was not significantly different from other beer bottles commonly used in trade, but was a simple variant of these forms. In particular, the court held as follows:

The General Court concluded that the 3D mark at issue lacked distinctiveness, as it did not allow the relevant public to identify the commercial origin of the beer or to distinguish the applicant’s products from those of other undertakings.