RUSSIAN STANDARD held to be distinctive

The Board of Appeal has issued its decision in a case involving the trademark RUSSIAN STANDARD.

At issue in this case was whether the word mark RUSSIAN STANDARD for goods and services in Classes 25, 30, 32, 33, 35, 36 and 42 of the Nice Classification had sufficiently distinctive characteristics to be apt to distinguish the goods of the trademark owner from those of others, and therefore fulfil the conditions set forth in Article 13 of the Trademarks Act (45/1997).

The Patent Office had denied registration based on the fact that the word combination 'Russian standard' was descriptive of all the goods and services at issue within the meaning of Article 13 of the Trademarks Act and that it was devoid of any distinctive character.

The Board of Appeal overturned the decision and held that the requirement that trademarks be distinctive is based on the following:

The Board of Appeal further reasoned that, when assessing whether a mark is distinctive, each case must be evaluated individually and all circumstances must be taken into account, including the goods that the mark intends to cover. Word marks in a foreign language can lack distinctiveness in Iceland if it can be assumed that most Icelanders speak the language, as is the case with English.

In the present case, the trademark RUSSIAN STANDARD is formed of the English words 'Russian' and 'standard', which can be translated into 'rússneskur staðall' in Icelandic. It was not however submitted in the case files that there is a special 'Russian standard' for the goods and services at issue, and it appeared that the concept/phrase 'Russian standard' is not known as a reference to specific qualities or traits. Although the phrase as such could be considered as common, it could not be seen as descriptive of the goods and services covered by the application. In addition, it could not be inferred that the word 'standard', as a part of a word mark, was an example of a mark that was based solely on common signs or phrases used in business or day-to-day life and, therefore, was not suitable for registration under Article 13. Therefore, it could not be said that registration of the mark would prevent others from advertising their goods or services.

The Board of Appeal then turned to the word element 'Russian' (or 'rússneskur'). It found that this word could mislead the public as to the origin of goods, within the meaning of Article 14, Paragraph 1, Item 2 of the act, if the goods/services did not originate from Russia. The Board of Appeal requested further information from the applicant’s representative as to the relationship of the two companies named on the application. Since the applicant seemed to be divided into two companies, one situated in Switzerland and the other one in Russia, the board found that there was a doubt as to whether the goods and services at issue originated from, and were produced in, Russia. According to the information submitted by the applicant’s representative, the companies (RSIPH AG and Roust Inc) were connected through one shareholder (ie, Company 1 owned part of RSIPH and part of Company 2, which owned part of Roust), as depicted below: 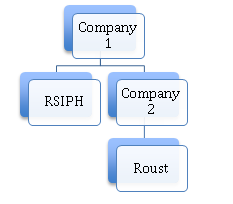 It was also confirmed that the goods in question originated from Russia and were produced there.

The board furthermore concluded that, based on the aforementioned information and data, the trademark RUSSIAN STANDARD was not misleading as to the origin of goods (see Article 14, Paragraph 1, Item 2 of the act).

Fourteen applications for RUSSIAN STANDARD have recently been rejected by the Israeli Patent and Trademark Office.