The Israeli Trademark Office has allowed the registration of the three-dimensional (3D) shape of the Rubik's cube for puzzles in Class 28 and for advertising services in Class 35 of the Nice Classification (Application to register marks Nos 228232 and 228233 in the name of Seven Towns SA, November 29 2012).

The applicant, Seven Towns SA, applied for the registration of the following 3D mark in Class 28 for 3D puzzles and in Class 35 for the advertising and promoting of goods and services in print, billboard, television, internet and any other media: 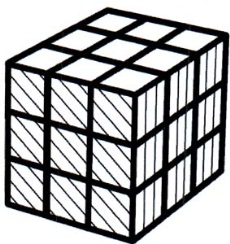 The examiner refused to register the mark on the grounds that it consisted of the product configuration of the goods and lacked the distinctive character required under Section 8(a) of the Trademarks Ordinance [New Version] 5732-1972 and Circular Letter MN 61.

Before the registrar, the applicant argued that:

Alternatively, the applicant argued that the mark was eligible for telle quelle registration based on its registrations abroad, in accordance with Section 16 of the ordinance, as it possessed some "degree of distinctiveness".

The registrar clarified that, as discussed by the Supreme Court in the Toffifee case, 3D marks may relate to product configuration or to product packaging, or be unrelated to either of them. Due to the potential limitation on competitors' freedom to market similarly shaped products, the Toffifee criteria for the registration of marks representing product configurations are:

The registrar concluded, on the basis of the evidence before him, that the shape of the marks applied for did not derive from a meaningful functional or aesthetic role. He also took into account the evidence of the existence of differently shaped and differently styled puzzles functioning on the same principle.

As to the requirement of secondary meaning, the registrar was not persuaded that the mark had acquired a secondary meaning through use in Israel, noting that most of the trademark use shown concerned two-dimensional representations, while the 3D promotional products were, for the most part, not sold in Israel (with the exception of cube-shaped key-holders offered for sale and cube-shaped tables appearing in sponsored competitions).

However, the registrar held that the mark was registrable under the telle quelle standard of distinctiveness in accordance with Section 16(a)(2) of the ordinance, which states that a mark must not be devoid of any degree of distinctiveness. The registrar also noted that, because the shape of the marks was neither functional nor aesthetic, the marks were not barred from telle quelle registration under Section 16(a)(2) of the ordinance, which prevents the registration of marks "composed only of letters or indications liable to be used in the trade to designate the type of goods".

Accordingly, the marks were allowed for registration.