Revealed: Andrei Iancu's email to USPTO staff on the day the US Capitol was stormed

On 6 January 2021, the US Capitol in Washington DC was stormed by a mob. Those involved were intent on preventing Congress from ratifying the result of the US presidential election held on 3 November 2020. This had seen Joe Biden and Kamala Harris secure 306 Electoral College votes to the 232 won by Donald Trump and Mike Pence.

In scenes that shocked the world, rioters entered the Senate chamber and legislators' offices. They removed property and caused significant damage. At least five people have died as a result of the assault, with dozens more injured. Scores of arrests have been made. The ongoing police investigation will doubtless lead to more.

Located in Alexandria, Virginia, the US Patent and Trademark Office (USPTO) campus is just a few short miles from the Capitol. Although the covid-19 pandemic means that it currently lies largely empty, many thousands of the agency’s staff live in and around the Washington DC Metropolitan area. Like all Americans, they will have been profoundly disturbed by what they saw on Wednesday, but perhaps even more so because it was happening so close to home.

It is with all this in mind that an email sent by USPTO director Andrei Iancu as that day's events were unfolding, should be seen. It is reproduced below.

This was not an email that Iancu was obliged to send. In fact, from a political perspective it may be one that causes him a problem or two. So the fact that he did send it, especially the time when he sent it, is notable.

Of course, Iancu was born in Romania when that country was a Communist dictatorship. He knows a thing or two about freedom and democracy. At what must have been a very troubling moment for his staff, the USPTO director stepped up and showed true leadership.

Iancu's email can be viewed in full below (with the text pasted below it). 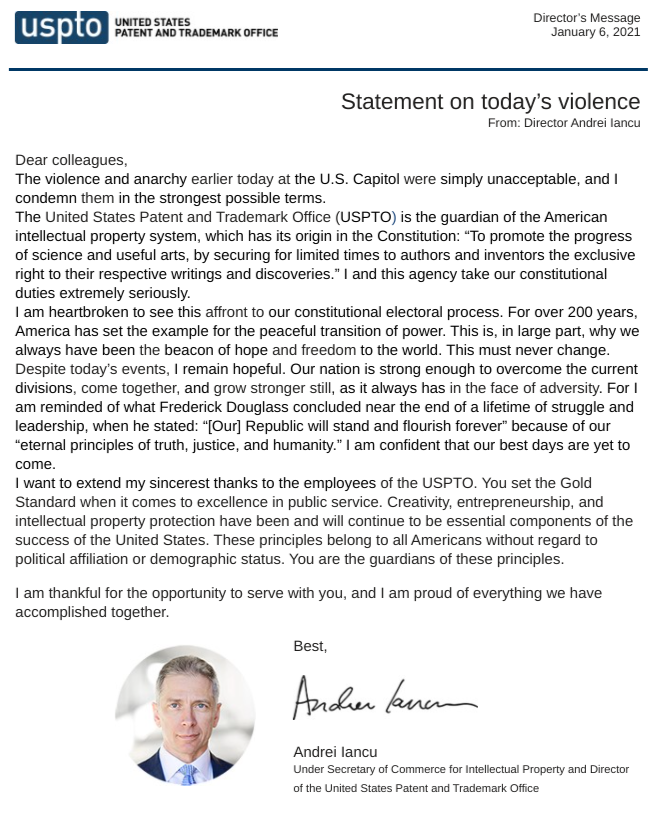 The text from the email:

The violence and anarchy earlier today at the U.S. Capitol were simply unacceptable, and I condemn them in the strongest possible terms.

The United States Patent and Trademark Office (USPTO) is the guardian of the American intellectual property system, which has its origin in the Constitution: “To promote the progress of science and useful arts, by securing for limited times to authors and inventors the exclusive right to their respective writings and discoveries.” I and this agency take our constitutional duties extremely seriously.

I am heartbroken to see this affront to our constitutional electoral process. For over 200 years, America has set the example for the peaceful transition of power. This is, in large part, why we always have been the beacon of hope and freedom to the world. This must never change.

Despite today’s events, I remain hopeful. Our nation is strong enough to overcome the current divisions, come together, and grow stronger still, as it always has in the face of adversity. For I am reminded of what Frederick Douglass concluded near the end of a lifetime of struggle and leadership, when he stated: “[Our] Republic will stand and flourish forever” because of our “eternal principles of truth, justice, and humanity.” I am confident that our best days are yet to come.

I want to extend my sincerest thanks to the employees of the USPTO. You set the Gold Standard when it comes to excellence in public service. Creativity, entrepreneurship, and intellectual property protection have been and will continue to be essential components of the success of the United States. These principles belong to all Americans without regard to political affiliation or demographic status. You are the guardians of these principles.

I am thankful for the opportunity to serve with you, and I am proud of everything we have accomplished together.