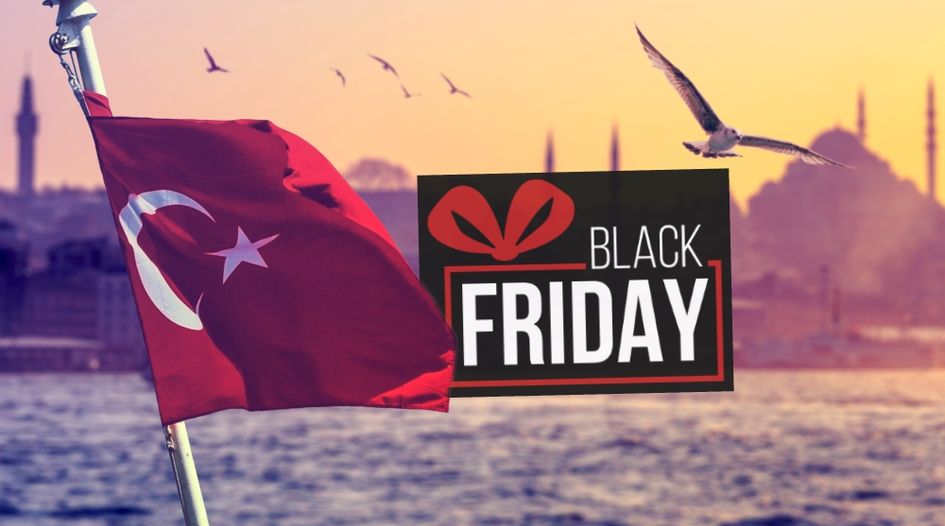 Black Friday and Cyber Monday are more than just an opportunity for shoppers to grab a bargain – they are global events that allows brands to connect with customers, sell products on a mass scale and reenforce brand identity. As such, use of the term by retailers and consumer-facing brands is widespread. However, in this guest post Yasemin Aktas, partner at Ofo Ventura in Istanbul, warns that use of the terms in Turkey is not without risk.

The registrability of the term ‘Black Friday’, which refers to the famous sales-day in the US (which occurs on the day after Thanksgiving) has been discussed in Europe for a while now.

The most recent case is from Germany. Hong-Kong based Super Union Holdings registered BLACK FRIDAY in 2016 and sought to prevent its use by other retailers in Germany, instead offering them expensive licensing deals. Some companies, including PayPal, Puma and Designer Outlet, initiated invalidity proceedings against the registration before the German Patent and Trademark Office. This ended with the invalidation of the mark due to lack of distinctiveness and the term having become colloquial in Germany in 2013. However, the registrant appealed the decision before the German Federal Patent Court and - at the last hearing - the judges decided to search for the German average consumer’s understanding of ‘Black Friday’ on the filing date of the application (in 2013) to make the distinctiveness evaluation. They additionally declared that the cited search, and the distinctiveness examination, needs to be made for each branch separately. The court will now make these detailed searches and evaluations before issuing its verdict.

In Turkey, to the best of our knowledge, the registrability of “Black Friday” has never been discussed by the courts. However, the term has been registered by some local persons before the Turkish Patent Office, with one of them (TR no. 2011 116299) covering retail sale services for almost all goods in Nice classes 1-34 - from electronics to clothing and from cosmetics to household goods.

In recent years, use of the term ‘Black Friday’ for sales campaigns in the last week of November has become very popular in Turkey and lots of local and foreign retailers have been actively using it. The aforementioned registrant has not yet taken any action against these users - but that does not mean that she/he would never do so.

In any such potential infringement action, the registrant may claim determination, prevention and cessation of the infringement, the removal and destruction of infringing products and materials, and may also claim for material and moral damages.

Additionally, retailers could mount a non-use defense against the infringement claims, since the five years’ grace period for compulsory use of the cited mark expired in 2018. If the registrant cannot prove the use of the mark for any branches, the infringement claims would be refused for them without being examined. While retailers could claim for non-use cancellation of the mark, such a claim would not be a defense option since non-use cancellation decisions are not retroactive.

Finally, the retailers could argue that Turkish consumers would never consider ‘Black Friday’ as a reference to the source of the products (as a mark), but rather they would consider it the name of a famous sale campaign. Therefore, they could claim that use of ‘Black Friday’ on sale campaigns does not constitute trademark infringement.

However, it is worth noting that the Turkish IP Courts usually tend to protect registered marks against their identical use on the same or similar goods/services regardless of the distinctiveness level of the mark on its filing date, or on the filing date of the infringement action.

Moreover, the filing date of the Black Friday registration was in 2011, when the US sales campaigns were not commonly known by the Turkish customers and – in our opinion – that would be in favor of the registrant in both infringement and counter invalidation claims.

Still, in our view, the lack of distinctiveness of the mark on the allegedly infringing use date would be a very strong defence against the potential compensation claims of the registrant. Likewise, the claim that Black Friday has become generic and is now known as a name of famous sales campaign by the Turkish customers would be a considerable invalidation argument.

These risks similarly apply to the use of ‘Cyber Monday’, which refers to the Monday following the US holiday of Thanksgiving. It has been registered before the Turkish Patent Office by a local person since 2015 (TR no. 2015/00953) as CYBERMONDAY on various goods/services in Nice classes 16, 18, 25 and 35, including retail sale services for clothing. Moreover, the five year grace period for compulsory use of this mark has not expired and so a non-use defense would not be an option against any infringement claims launched by this registrant until the expiration date in 2021.

Turkish practitioners are increasingly being asked about the potential risks of using the terms ‘Black Friday’ or ‘Cyber Monday’ in Turkey. For now, retailers would do well to consider the risk of being subject to infringement claims before choosing to use them, at least until a challenge against these registrations is launched.