Requirements for proof of genuine use increasingly difficult to meet

In Decision B-3294/2013 (April 1 2014), the Federal Administrative Court found that Nestlé Schöller had failed to prove the genuine use of its mark in the five years before the objection of non-use was raised. It left open the question of whether use in the form depicted below was sufficiently close to the registered mark to qualify as use: 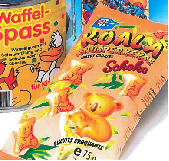 The court noted that the mark as registered contained three repetitions of the word 'Koala', which the actual packaging did not. It came to the conclusion that, in any case, the proven average annual revenue of €8,000 did not amount to "genuine" use for everyday consumer goods such as biscuits.

The court requires very detailed evidence when it comes to actual use. It criticised the fact that most of the sales figures could not be attributed to specific goods or packaging and, therefore, failed to prove actual revenues. It also held, once again, that affidavits under German law (eidesstattliche Erklärungen) do not have any special status under Swiss law and are not, per se, sufficient evidence. They do, however, carry some weight if the person signing the affidavit is also offered as a witness.

The decision is a reminder that the Federal Administrative Court is ratcheting up the requirements for proof of genuine use. The requirements have reached a level that is difficult to meet, even for sophisticated trademark owners such as Nestlé Schöller. The actual use of the mark by its licensee, Kuchenmeister GmbH, can hardly be doubted (use in Germany is sufficient under the 1892 agreement between Germany and Switzerland).