The Warsaw District Court has dismissed a request for a preliminary injunction in a comparative advertising dispute between telecommunications companies.

Telekomunikacja Polska SA, one of the oldest telecommunications providers in Poland and the owner of the mark NEOSTRADA, filed a request for a preliminary injunction against Polkomtel Sp zoo, a mobile network operator that uses the brand name Plus.

The request for a preliminary injunction concerned television and online advertisements, as well as related advertising materials, broadcast by Polkomtel under the slogan “Internet w Plusie jest szybszy niż Neostrada” (“the Internet offered by Plus is faster than Neostrada”). The slogan was used together with information concerning internet speed based on the ranking prepared by SpeedTest.pl in July 2013.

The hottest point of discussion was a television advertisement shown on a public channel with a nationwide range. The advertisement featured a young woman called Basia who had just broken up with her boyfriend and was about to start a new chapter in her life. Following the other changes in her life, she decided to change internet providers. The new provider was called Plus and offered high-speed internet access based on the LTE technology. Basia discovered that “the Internet offered by Plus is faster than Neostrada”, as depicted below: 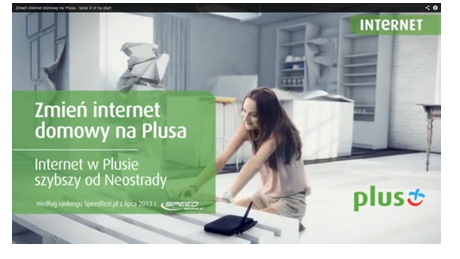 In the request for a preliminary injunction, Telekomunikacja claimed that Polkomtel infringed the Polish word mark NEOSTRADA (right of protection No R182762) by taking unfair advantage of the reputation and distinctive character of the mark. According to Telekomunikacja, the comparison between the services of both providers was not objective, and promoted Polkomtel's services in a biased and unreliable manner. Further, Telekomunikacja also claimed that the advertisement compared the parties' services in a way that was contrary to good customs and, as such, the advertisement constituted an act of unfair competition.

Telekomunikacja thus requested that Polkomtel’s advertisement be banned for the duration of the court proceedings.

In its decision, the court stressed that comparative advertising will be deemed to be an act of unfair competition if it is contrary to good customs. In the present case, Polkomtel’s advertisement was not found to be contrary to good customs, and was considered to be legally permissible comparative advertising. According to the court, the advertisement did not mislead or unduly influence consumers when making a purchasing decision. In the advertisement, services fulfilling the same needs or with the same purpose were compared in a reliable and verifiable way on the basis of objective criteria. Only the speed of the internet connection offered was compared, and such comparison was based on the ranking prepared by an independent source (SpeedTest.pl).

In addition to filing the request for a preliminary injunction, Telekomunikacja decided to broadcast its own advertisement (pictured below) with Basia, the young woman featured in Polkomtel’s advertisement; in Telekomunikacja's advertisement, Basia goes back to Neostrada crying and regretting her mistake. The reference to Polkomtel’s advertisement is indirect and very subtle. The PLUS trademark is not used in the advertisement, and the main common element is the heroine Basia. The services offered by the other provider (ie, Plus) are simply described in the following way: “the new one is a short-distance runner” and “it allegedly has a small transfer fee”. 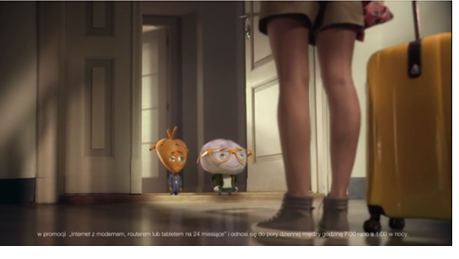 It remains to be seen whether the dispute is now over or whether this was only the first battle in a war between the two operators.