Print article
United States of America
Legal updates: case law analysis and intelligence
In In re Brouwerij Bosteels (Case 77357895, August 26 2010), the Trademark Trial and Appeal Board (TTAB) has held that a product packaging consisting of a beer glass and stand with wording including 'Pauwel Kwak' and scrollwork was not inherently distinctive, had not acquired distinctiveness and, therefore, did not function as a trademark for the applicant's goods.
On December 21 2007 Brouwerij Bosteels filed an application to register on the Principal Register the following mark for "beer" in Class 32 of the Nice Classification: 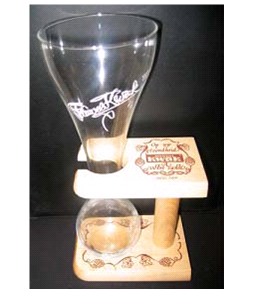 "[whether an alleged mark is] a 'common' basic shape or design, whether it [is] unique or unusual in a particular field, [or] whether it [is] a mere refinement of a commonly adopted and well-known form of ornamentation for a particular class of goods viewed by the public as a dress or ornamentation for the goods." Seabrook Foods Inc v Bar-Well Foods Inc (196 USPQ 289, 291 (CCPA 1977))

The TTAB held that the evidence showed that the glass and stand shown in the mark were common and known as a 'yard', 'half-yard' or 'foot of ale glass' with stand. These glasses and stands are not used as source indicators for beer, nor are they associated with a particular brand of beer. Accordingly, it would be reasonable for the public to perceive Bosteels' product packaging as "a mere refinement of this type of beer glass and stand" - not as an inherently distinctive source indicator.
Second, the TTAB held that Bosteels' alleged mark had not acquired distinctiveness. In response to Bosteels' claim of acquired distinctiveness based in part on its ownership of a prior registration, the TTAB examined whether the present mark was "the same mark" as its previously registered mark under the doctrine of legal equivalents. Under this doctrine, marks must be "indistinguishable from one another or create the same continuing commercial impression such that the consumer would consider both as the same mark". The TTAB determined that Bosteels' previously registered two-dimensional mark, a logo (shown below), was not the legal equivalent of the three-dimensional mark at issue: 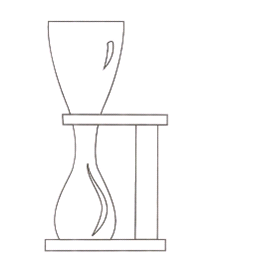 Therefore, Bosteels was not entitled to tack on the use of the registered mark to its use of the mark at issue for purposes of transferring distinctiveness to the latter mark. Moreover, Bosteels had presented insufficient evidence to show acquired distinctiveness.
Based on the foregoing, the TTAB concluded that Bosteels' alleged mark lacked inherent and acquired distinctiveness and did not function as a trademark. Accordingly, the TTAB affirmed the examining attorney's refusal to register the mark.