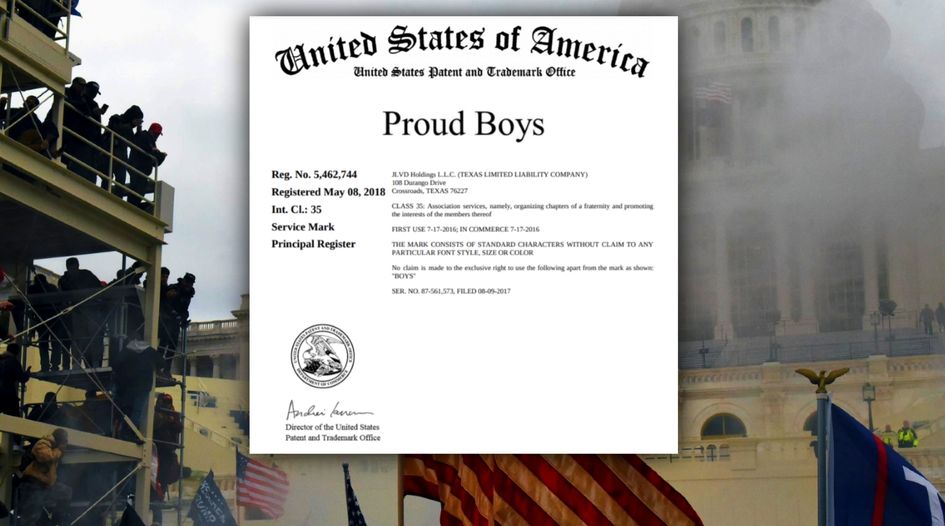 In an exclusive interview with WTR, the owner of the Proud Boys US trademark registration (and former member of the far-right organisation) reveals why he has surrendered the mark, and why he expects the USPTO will refuse any future attempt for registered rights in the group’s name.

Last month, WTR reported on a trademark related to the Proud Boys group in the wake of the attack on the US Capitol in Washington DC. At that time, members of the far-right political organisation, which was founded in 2016, were reported to be celebrating their role in the day’s events. Since then, law enforcement has been investigating what role the group played in the Capitol riot, with seven members facing charges in connection to the riot, including three on conspiracy charges. Meanwhile, the Canadian government last week labelled the Proud Boys a “terrorist entity” for “engaging in political violence and espousing misogynistic, Islamophobic, anti-Semitic, anti-immigrant and white supremacist rhetoric”.

The use of a trademark is notable due to the Proud Boys adoption of a brand identity – including members often wearing distinctive dress (previously Fred Perry black/yellow/yellow twin-tipped shirts) and the sale of official merchandise. The PROUD BOYS trademark was filed in August 2017 – approximately a year after the group formed – by Texas attorney Jason Lee Van Dyke, who at that time was ‘sergeant-at-arms’ of the Dallas/Fort Worth chapter of the Proud Boys and acted as the organisation’s legal counsel. It was primarily used, he added, to stop ‘unauthorised’ chapters and merchandise. However, he confirmed to WTR last month that he is “no longer a member” of the group or representing it in any capacity. Nonetheless, he still held the trademark rights.

However, that is set to change. Talking to WTR over the weekend, Van Dyke confirmed that he has submitted documents to the USPTO to surrender the PROUD BOYS registered trademark. In the document (which can be viewed here), the reason given is that use of the mark “was discontinued” and “there is no intent to ever resume such use”.

Asked why, after holding the trademark for years, he decided to give it up now, Van Dyke said it was due to recent events. “I re-established my law practice in November of last year and, since that time, the organisation continued to make its own brand more and more toxic,” he says. “I spent a great deal of time and money trying to help that group, and the favour was returned by them essentially spitting in my face.”

He further confirms that he did not offer to sell the license to anyone else associated with the Proud Boys – and actually doesn’t expect any current members would be interested in it. “The trademark was registered to protect the name of an organisation that had been slandered both by the media and by actual white supremacists,” he claims. “At some point since my ousting from the group, they apparently stopped enforcing their own bylaws, which prohibited actual white supremacists, Nazis, and the like from joining. Their reputation is so bad right now that I seriously doubt the trademark has any monetary value.  In fact, I am not going to speculate about what current leadership is going to do. I don't care. The only thing that is important to me is that it's not going to be my problem anymore.”

Of course, with the earlier Proud Boys trademark being surrendered, it could open the door for new filings – either from current members or third-parties. However, Van Dyke says that his trademark reached registration because it was filed in the early days of the far-right group, before its toxic reputation became mainstream and its activities were on the radars of federal law enforcement. He now expects that should anyone from the Proud Boys seek trademark protection at the USPTO, it will be refused – although he suggests that the refusal will be because of the new administration.

“If [a trademark] was filed by Proud Boys who intend to use it for the purpose we originally sought registration for in 2017, I would expect it to be denied,” he says. “The Democratic Party has made it very clear that they do not believe conservative or libertarian values have any place in the United States. The Democratic Party, and its allies in big tech, have already started using their political power following Joe Biden's election to remove conservative and libertarian speech completely from the public square. It would not surprise me at all to see the Biden administration use its executive authority over the USPTO to take similar action against conservative and libertarian organisations,’ he opined.

At present, there is no evidence that the new administration has made any partisan changes that have impacted examination decisions at the USPTO. Indeed, it was in the previous administration that the agency was criticised for social media posts that appeared to be supporting President Trump – with one leading academic claiming it could be a violation of the Hatch Act.

For now, then, Van Dyke hopes that surrendering the trademark is his ‘final goodbye’ from the extremist group. Time will tell whether any future attempts to secure registered trademark rights related to the Proud Boys will be refused.