Among the various types of intellectual property applications that are filed at the Indonesian Directorate General of Intellectual Property Rights (DGIP), trademark filings are the most common, with 62,813 applications being made in 2013. Among ASEAN countries, this figure places Indonesia firmly at the top in terms of the number of trademark applications filed. In view of this, the DGIP is revising the current trademark law and is implementing regulations to improve its services and provide greater legal certainty for all trademark owners in Indonesia.

The primary reasons for revising the law are to foster fair competition, provide broader protection for trademark owners, simplify the procedures for trademark registration and ensure compliance with the international conventions that Indonesia has or will ratify. The possible changes will include some refinements of the current practice (including revised procedures to the publication stage), the introduction of some new practices (such as the introduction of non-traditional marks), and the abandonment of certain outdated approaches (which specifically encompasses DGIP trademark cancellation at its own initiative).

This could significantly hasten the examination process and reduce the DGIP’s trademark application backlog. By publishing the application before it is substantively examined, the concept is that time will not be wasted by 're-examining' the mark when an opposition is filed. This is a practical approach in Indonesia where the examiners who examine the applications are the same ones who review oppositions that are filed.

With the above change, the three-month publication period provides the only opportunity that trademark owners will have to oppose any third party’s application. While the push for greater efficiency is laudable, it is important to bear in mind that all examinations will fall within the examiner’s subjective discretion, making it difficult to achieve predictable outcomes. Examiners are still obligated to, on their own initiative, reject a bad-faith or confusingly similar application under the substantive examination stage, but it is possible that they will begin to rely more on oppositions by trademark owners, while reducing the stringency of their confusing similarity reviews.

To help manage risk if this change is enacted, trademark owners are strongly advised to pay considerably more attention to the monitoring of published trademarks that may be confusingly similar, so that they can file oppositions in time to protect their rights, by bringing the examiner’s attention to their additional evidence and facts in support of the examination. This is a particularly salient point in the Indonesia trademark scenario, since the system of invalidation/cancellation is costly and complicated, and the petition needs to be filed with the Court of Commerce.

As a precaution, it is also important to point out that this potential change in the law could indirectly invite more bad-faith applications. This is a particularly pertinent issue in Indonesia, where trademark squatters are already a significant problem. Unless a trademark owner has in place a system for monitoring trademarks in local publications, bad-faith applications may escape through to registration. 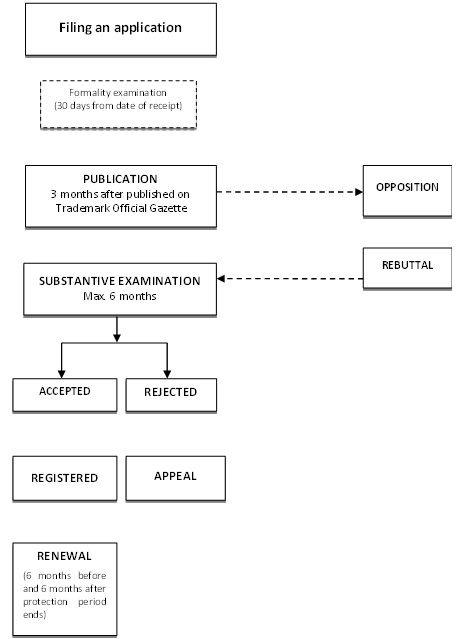 Under the proposed amendments, the DGIP plans to cut down on the substantive examination lead time from the current nine months and 10 days to only six months. Though its actual applicability in practice is questionable, it is hoped that with the DGIP’s plan to improve its administration programme by using the Industrial Property Automation System - a programme developed by the World Intellectual Property Organisation which is designed to enhance the quality on the time as well as the output - long delays in the examination process will be minimised.

The imposed fines will be much higher in certain instances, such as trademark infringement involving forgery of a registered mark in its entirety - in which case the top level of the fine will be Rp2.5 billion (approximately US$217,500), as opposed to Rp1 billion (US$87,000). The fines for trademark infringement using a mark similar in its essential part to a registered trademark shall be capped at a maximum of Rp2 billion (US$174,000), instead of Rp800 million (US$69,600). These tougher criminal sanctions should - if the trademark owner undertakes a serious enforcement action - help to alleviate the problem of counterfeit goods in Indonesia, as well as improve the country’s image as being more IP-owner friendly.

The proposed trademark law will also accept filings/registrations of the following non-traditional trademarks: three-dimensional marks, sounds, scents and holograms. While this is a good step forward in the local law, it is not yet clear whether any practical issues will arise in the submission of sound, scent and hologram specimens. Assessing the distinctiveness of these non-traditional marks will also be a challenge for examiners, as is the case in other countries. It is therefore advisable that non-traditional trademark applications should be accompanied by a corresponding previously accepted registration.

Further, the concept of an 'association of mark' will be introduced as it relates to the assignment of registered trademarks. Although trademark owners are not required to register two or more of their marks in association, the proposed law states that, in an assignment of more than one registration under the same IP owner, the registered marks that have similarities (in large part or in entirety) and have similar goods/services can only be assigned when all of the registered marks are transferred to the same party. The benefit of this new practice is that consumers will be less confused as to who is the owner of a registered trademark, as a similar mark for similar goods or services cannot be owned by two different entities. This will also ensure that consumers will not suffer from vastly different levels of product or service quality rendered by an identical or similar brand.

It is important to note, however, that this provision involves subjective consideration of the similarities of the registered marks to be assigned. It is therefore possible that there may be further complications and confusion in drafting an assignment agreement between two parties, as the assignor and assignee must ensure that the list of assigned marks is complete and exhaustive to avoid a rejection of the assignment by the examiner.

Another complication may arise when mergers and acquisitions occur. The proposed assignment changes may result in limitations being placed on acquiring or selling parts of a company’s business or intellectual assets, as an assignment of registered trademarks must form part of the deal.

There is also a new section under the draft Trademark Law that talks briefly about the application for registration of international trademarks under the Madrid Protocol. The section outlines the eligibility of an Indonesian individual or business entity to file an international trademark, as well as the recognition of a designation in Indonesia for overseas trademark applicants. Further provisions regarding international trademark registration will be regulated by a government regulation, which is not yet available. This move is in accordance with the ASEAN Blueprint, which commits member countries to Madrid Protocol accession by December 2015.

In addition, the proposed bill will remove the provision that allows the DGIP to cancel trademark registrations at its own initiative based on the owner’s non-use of the mark for three consecutive years. In reality, however, such cancellations by the DGIP were extremely rare and, as such, this change is more symbolic. When this change is implemented, cancellation actions will only be initiated by a third party in the form of a suit commenced at the Court of Commerce.

While these new provisions are not yet set in stone, as they are pending further legislative approval, they appear to be a promising step towards developing clearer and more effective trademark protection and enforcement in Indonesia. It is anticipated that the new provisions will be implemented within the next one to two years, in line with Indonesia’s accession to the Madrid Protocol.