In Think Schuhwerk GmbH v Office for Harmonisation in the Internal Market (OHIM) (Case T-208/12, July 11 2013), the General Court has upheld a decision of the First Board of Appeal of OHIM in which the latter had refused to register a positional trademark for shoes.

In the present case, the General Court had to deal again with a positional trademark. The decision shows the main problem when it comes to registering positional trademarks - namely, that they have to show the product itself in order to define the positional element. In this case, the trademark for which registration was sought was depicted as follows: 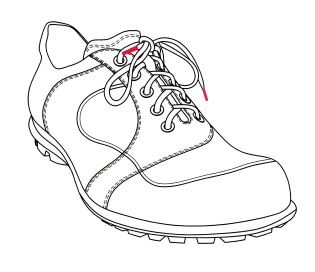 The description of the trademark read as follows: “protection is claimed for shoes with laces at the end of which red aglets are positioned”.

There was no doubt that the shoe as such was not distinctive, because it looked like any other shoe and consumers would not would link the shoe with its commercial origin. Therefore, the General Court had to determine whether the mere fact that red aglets were positioned at the end of the shoe laces would make the trademark sufficiently distinctive to justify registration.

One of the few positional trademarks to have been registered also covered shoes; however, in that case the mark consisted of a pattern of four stripes:

Surprisingly, the application did not contain any description of the mark, and the trademark owner only pleaded that the sign was a positional mark before the Board of Appeal (Case R 938/2000, May 7 2002). The Board of Appeal came to the conclusion that the trademark was not a positional mark, but a figurative mark representing a stylised shoe with stripes arranged at an angle to one another (op cit, Paragraph 20).

It is not clear why the stripes in this trademark were considered to be distinctive, while, for instance, the following trademark, which consisted "essentially of a round dot in the middle of the back part of thumb cap of the shank of a hypodermic needle", was rejected on the grounds that it lacked distinctiveness (Case R 781/2006, April 18 2007):

In the present case, the applicant alleged that the Board of Appeal had erred in examining the distinctiveness of the trademark on the basis of the shoe as a whole, and not on the basis of the red aglets, which, according to the description, constituted the trademark. The General Court concluded that the red aglets on the shoe laces were not independent of the appearance of the goods covered by the trademark and, therefore, merged with this appearance. It also stated that the applicant would have had to prove that the sign, as characterised in the description, was independent of the appearance of the goods; however, the applicant had failed to furnish such proof. The applicant claimed that the trademark - that is, the red aglets - was new and original and that none of its competitors used these elements. However, the General Court took the position that neither novelty nor originality would be decisive criteria when assessing the distinctiveness of a trademark.

The decision shows that it remains difficult to obtain the registration of positional marks. It is not surprising that, of all the positional trademarks cited, the only one that was registered did not contain a description. The problem for applicants is that the product on which the positional mark is shown is usually of a general nature; as a consequence, the examiners tend to find that the trademark in its entirety is non-distinctive, because it will be considered as a figurative or 3D trademark.