The Swiss Administrative Court has confirmed that a positional five-stripe mark could benefit from trademark protection in Switzerland (Decision B-86/2012, March 11 2013).

On November 16 2005 K-Swiss, a US shoe manufacturer with Swiss roots, applied for the registration of a positional mark for sports and casual shoes in Switzerland. The mark consisted of five stripes on the instep of a shoe:

The mark reflected the signature stripes used by K-Swiss for its sports shoes over a long period of time:

The Swiss Federal Institute for Intellectual Property (FIIP) refused the application on January 24 2006, finding that the mark consisted of trivial elements and was thus generic.

The applicant filed a submission with the FIIP on March 28 2006, claiming that the mark was a trapezoid segmented into five parts, rather than five rectangular stripes; therefore, it was not generic but distinctive. In addition, K-Swiss emphasised that, due to the fame of adidas’ three stripes, the average consumer was used to perceiving such marks as an indication of origin. After two other rounds of submissions (including the filing of materials aiming at proving acquired distinctiveness), the FIIP finally refused the application on November 21 2011. The FIIP found that the mark consisted of basic geometrical shapes that would be perceived either as a technical means to reinforce the shoes or as decorative elements.

The decision of the Administrative Court is noteworthy because it is one of the few decisions in which the court has overturned a refusal decision of the FIIP on absolute grounds other than the fact that the mark consists of a geographic indication.

In its reasoning, the Administrative Court held that the mark should be considered in accordance with the standards applying to three-dimensional marks - namely, the sign must differ from usual shapes used on the market to qualify as inherently distinctive. Interestingly, the court concluded that the five-stripe mark would be perceived as an indication of origin primarily because consumers were familiar - thanks to other trademark owners such as adidas - with the notion of stripes on shoes being indications of origin rather than mere decorations: 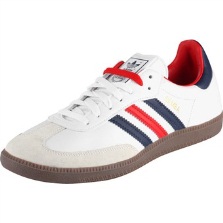 It is also interesting to note that K-Swiss not only registered its five-stripe mark in the United States in 1974 and in Germany in 1990, but also successfully enforced its German mark in 2012 before the appellate court of Düsseldorf against the Swiss shoe manufacturer Künzli SwissSchuh AG (K-Swiss was the former distributor of Künzli in the United States before starting to produce its own striped sports shoes), ultimately causing the latter to change its shoe design from five stripes to five squares (Decision I-20 U 89/11, February 28 2012).

In the German decision, the court used the same reasoning as the Swiss Administrative Court in the present case.