Pork noodles stall owner held to have engaged in passing off

The case of Tang Chay Seng v Tung Yang Wee Arthur ([2010] SGHC 228, August 10 2010) involved a falling out between Tang Chay Seng (the plaintiff) and his nephew, Tung Yang Wee Arthur (the defendant), over their respective pork noodles stalls. The High Court of Singapore ruled that, while there was no trademark infringement on the part of the defendant, passing off had occurred.

The plaintiff is the sole proprietor of a famous award-winning pork noodles stall called the 'Hill Street Tai Hwa Pork Noodle'. From October 2004 he has owned trademark registrations for the following mark in Classes 29 and 30 of the Nice Classification: 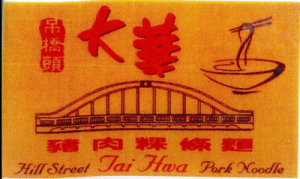 In 2006 the plaintiff, his son and the defendant jointly set up a pork noodles stall at a food court in VivoCity, a major shopping centre in Singapore. For the purposes of publicising the stall, the plaintiff gave numerous culinary awards and certificates that he had garnered over the years to the defendant for copying. However, the VivoCity stall closed down within two weeks of opening.

In 2008 the defendant independently opened a pork noodles stall at VivoCity using the following signboard:

About a month after the opening of his VivoCity stall, the defendant placed an advertisement in a Chinese newspaper in Singapore, which essentially stated that the "famous Hill Street Tai Hwa Pork Kway-teow and Noodle", originally from Hill Street, had now moved to VivoCity. In that advertisement, the defendant also referenced various awards and certificates granted to the "long-established name of Tai Hwa", and reproduced the awards and certificates of the plaintiff.

Soon after this advertisement was published, the plaintiff instructed solicitors to write to the defendant, alleging trademark infringement and passing off. Thereafter, the defendant placed a further advertisement in the same newspaper stating that his VivoCity stall was the “one and only” and had “no branch”. The plaintiff commenced legal proceedings against the defendant for trademark infringement and passing off.

In addition, the court stated that, even if there had been no consent, there would be no trademark infringement as the plaintiff’s marks were dissimilar to the defendant’s sign. In particular, the court referred to the case of Matratzen Concord GmbH v OHIM (Case T-6/01), in which the European Court of First Instance had held that:

“a complex trademark cannot be regarded as similar to another trademark which is identical or similar to one of the components of the complex mark, unless that component forms the dominant element within the overall impression created by the complex mark… with the result that all the other components of the mark are negligible… such a comparison must be made by examining the marks in question, each considered as a whole.”

The High Court held that there were too many obvious differences between the plaintiff’s marks and the defendant’s sign for them to be considered similar.

However, the court found in favour of the plaintiff with respect to passing off. First, the court accepted that there was goodwill attached to the plaintiff’s pork noodles business, especially since the plaintiff had won a number of culinary awards.

However, the defendant was not able to provide any credible evidence of damage to his goodwill. Moreover, he could not provide evidence of the loss suffered or likely to be suffered, and conceded that his profits had not been affected by the opening of the defendant’s stall. In light of the lack of evidence of damages, the plaintiff was awarded only nominal damages (S$1,000) for loss of goodwill arising from the advertisement.