In Strauss Ice Cream Ltd v Osem Investments Ltd (CC (TA Distr) 14824-10-13, February 13 2014), the Tel Aviv District Court has refused to enjoin the defendant from marketing a popsicle made up of concentric circles which allegedly copied the shape of the plaintiff's product.

Since the 1980s Strauss Ice Cream Ltd, part of the Unilever group, has manufactured and marketed a circular popsicle, made up of three concentric circles in three different colours on a stick, under the name Matara (Hebrew for 'target'). A picture of Strauss' product in its packaging, which shows an image of the product, is depicted below: 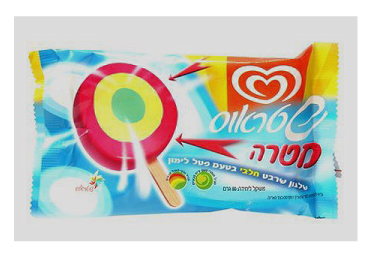 (picture taken from the online edition of Calcalist at 'calcalist.co.il' in respect of this dispute)

However, the pictures submitted to the court may be different, as there was mention of the image of a lion and the name Max. The Max series is depicted below - the Max Matara popsicle is the fourth from the left:

(picture taken from the online edition of Ynetnews at 'ynet.co.il')

In the summer of 2013 Noga Ice Cream, part of the Nestle group and owned in part by Osem Investments Ltd, launched a popsicle made up of three circular concentric layers in two colours. Noga's product was marketed under the name Mastik Banana (Hebrew for 'banana bubble gum'). Noga's product in its packaging, which shows an image of the product, is depicted below: 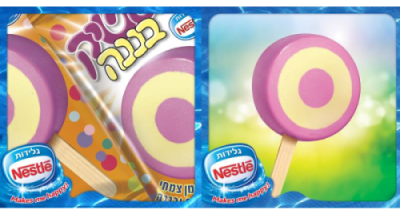 Strauss brought an action for passing off in accordance with the Commercial Torts Law 1999, and infringement of an unregistered well-known mark in accordance with the Trademarks Ordinance (New Version) 5732-1972, alleging that the defendant had copied its product, apart from insignificant differences, and had sought to benefit from Strauss' years of investment and commercial success.

In its defence, the defendant argued, among other things, that by seeking to prevent the sale of a similar popsicle under a different name and in different packaging, the plaintiff was attempting to appropriate unduly the shape of a target board game. Strauss argued, among other things, that the defendant had failed to give a unique name to its product (merely choosing the name of a flavour), and that popsicles are often sold over the counter by reference to their pictures alone.

However, the court, applying the three-fold test of confusing similarity, held that the products, while undoubtedly similar, did not create a likelihood of confusion, due to their clearly different packaging (a blue packaging with the image of a lion and the name Max in the case of the plaintiff's product; orange packaging in the case of the defendant's product) and different product names, as well as the prominent indication of the manufacturer on each product.

The court rejected the plaintiff's argument regarding the defendant's product name, holding that names based on flavours are common, and regarding the higher likelihood of confusion among children. The finding that there was no likelihood of confusion was not challenged by the fact that the products were sold over the counter by reference to the pictures of the products, as the defendant showed that such sales were a minor portion of popsicle sales, and consumers had the opportunity to realise their mistake. The court also rejected the plaintiff's argument of post-sale confusion, in line with earlier case law.

With regard to Strauss' claim that its product shape was a well-known mark and should be protected as such, the court ruled that the shape of the Matara popsicle had acquired a reputation sufficient for recognising it as a well-known mark. However, in light of its conclusion that the trademark cause of action also had to be rejected, the court left open the question of whether, as a matter of principle, a local - rather than global - trademark may be well known, given the legislative history of Israel's statutory amendment introducing the protection of well-known marks in line with the Paris Convention.

Addressing the question of trademark/passing-off protection for the plaintiff's product shape, the district court reiterated the rule laid down by the Supreme Court, which limited trademark protection for product configurations to cases where the product shape had acquired a secondary meaning and had neither a functional nor an aesthetic purpose (see the TOFFIFEE decision). It interpreted this rule and earlier Supreme Court case law as meaning that the protection afforded to product shapes - as distinct from the protection afforded to the product's packaging, description or name - was also an exception within the context of passing off.

Determining whether the plaintiff's product shape was entitled to trademark protection, the court ruled that the shape had acquired a secondary meaning. Further, it was prepared to consider that the shape was neither functional nor aesthetic, reasoning that popsicles are primarily purchased for their taste - and, in the plaintiff's case, due to the consumers' acquaintance with the product and its reputation - but not for their shape. However, the court held that there was no infringement due to:

In the circumstances, and given the parties' efficient conduct of the case, the court ordered each party to bear its own costs.