Philippines businessman plans Archewell launch in US, vows to block Duke and Duchess of Sussex 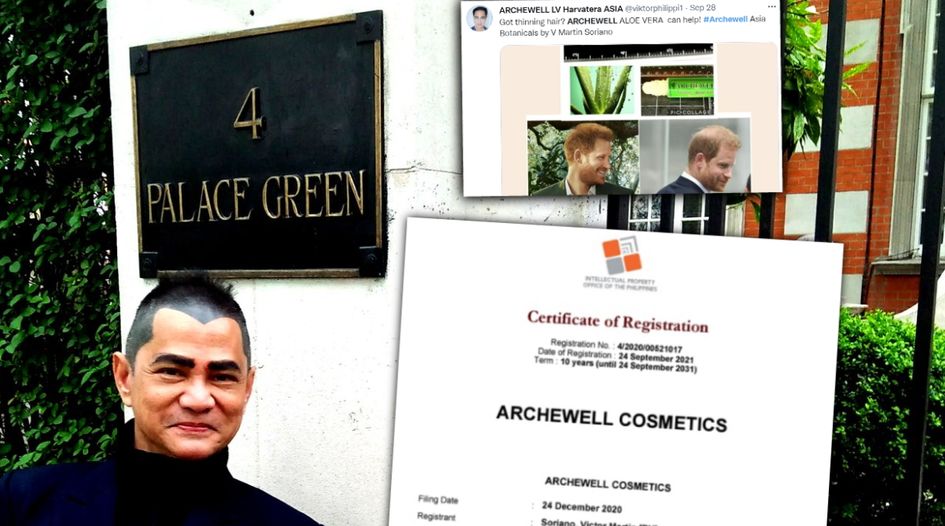 A small business owner in Manila, Philippines, who last year became embroiled in a trademark dispute with Prince Harry and Meghan Markle, has told WTR he plans to launch his Archewell Cosmetics brand in the US – and claims the royal couple cannot sell similar goods in countries including Canada and the US.

As WTR exclusively reported earlier this year, an entity representing the Duke and Duchess of Sussex, Cobblestone Lane LLC, pursued legal action against Victor Martin Soriano, a Filipino small business owner, over a trademark application for the term ARCHEWELL HARVATERA. The notice of opposition was filed in November 2020 and related to an application filed by Soriano in July 2020 for cosmetics and fragrances. The opposition was based on Harry and Meghan’s brand Archewell, which they announced in April 2020 (and subsequently filed trademarks for the term in jurisdictions including the European Union, the United States and the United Kingdom). Cobblestone Lane LLC’s extension to file an opposition expired on 28 December 2020, and the application therefore reached registration a few months later.

Soriano, who owns a small business called Cyclone Trading, has subsequently filed more Archewell-related trademark applications in the Philippines. A month after the Sussexes lodged the notice of opposition, he filed for an additional mark at the IP Office of the Philippines (IPOPHL) for the term ARCHEWELL COSMETICS. In March, Soriano was defiant in his plans for an Archewell brand despite the work of the Duke and Duchess of Sussex, telling WTR: “You bet I can slug it out with them when it comes to legality.”

It appears the royal couple did not want a legal fight, and the ACHEWELL COSMETICS trademark was approved without any opposition. It was registered at the IPOPHL in October 2021. Responding to the registration, Soriano said: “I dedicate this to the British public, the purveyors of what is right and wrong for humankind. The eternal Empire steeped in tradition, [and] for those who respect HRM The Queen and the Royal Family. [The trademark] is valid in the Philippines and in all ‘first-use trademark countries’ like the USA, Canada and Denmark, so Harry and Meghan cannot sell as ‘Archewell Cosmetics’ in America.”

As well as obtaining trademark protection, Soriano has also launched Archewell-branded cosmetics products on the Lazada online marketplace. Examples include ‘Archewell aloe vera fragrance oil’ and ‘Archewell fragrance oil hair care’. Interestingly, the hair care product features a claim that it can cure balding – with a ‘before and after’ image on Lazada showing hair growth on an unidentified person’s scalp. On Twitter, Soriano has promoted the Archewell hair growth product by using a photo claiming Prince Harry has ‘thinning hair’. Asked about that, he tells WTR it was a defensive move not to use the image on the online marketplace. “I wanted to use Harry's picture on Lazada, but he might sue,” he confirmed. “But take note, if he and Meghan go out of bounds with their book and attack Charles and show disrespect to the Royal Family, it's open season and I will use the picture.”

Outside of selling Archewell brand items in the Philippines, Soriano reveals he is “tying up laboratories” to launch abroad. “Export-wise, I want to concentrate in the US, where Meghan will see me face-to-face,” he says. “Archewell is already in use in America where my sister in Los Angeles is selling to Filipino communities. There is no date yet for an e-commerce launch in America, but physically we are already ‘first to use in America’, meaning they cannot use Archewell Cosmetics in America as it already has physical use there.”

For that reason, he is monitoring the royal couple and predicts they will enter the sector at some point. “Cosmetics is an old reliable,” he claims. “In my view, their other businesses are not doing well so what is the fastest way to make $1 billion like Rhianna? Cosmetics, and there is already a rumour that Meghan is planning a skincare line.”

It is clear from Soriano’s Twitter feed and prior comments to WTR that he is (as he himself described) “anti-Meghan, but not anti-Queen”. Therefore, it appears his launch of an Archewell brand in the Philippines – and soon internationally – is, at least in part, an attempt to rile up the Sussexes. Crucially, any perceived push-back from Cobblestone Lane LLC could be reported by a hostile media as ‘going after a small business owner’. WTR reached out to an Archewell spokesperson for their perspective.