The Romanian State Office for Inventions and Trademarks (SOIT) has rejected an application to register the combined trademark POLDO (Application M 2010 05363), pictured below, for goods and services in Classes 30, 35 and 43 of the Nice Classification: 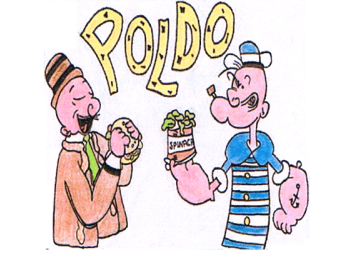 The refusal was based on an opposition filed by Hearst Holdings Inc, the owner of the following trademarks, among others:

In its response to the opposition, the applicant stated that it was willing to remove the figurative elements (ie, the graphical representation of Popeye the Sailor and Wimpy) from its trademark in order for its application to be accepted. However, SOIT considered that this request for modification of the application substantially changed the character of the trademark, taking into account the importance of the figurative element in the mark and the fact that such modification would change the nature of the mark (ie, from combined to word mark). SOIT concluded that the applicant had to file a new trademark application, and rejected the request.

The decision is of importance in that it recognises: