In The Board of Trustees of The University of Alabama v Pitts (Opposition No 91187103, July 23 2013), the US Trademark Trial and Appeal Board (TTAB) has dismissed an opposition filed by the University of Alabama and the estate of Paul 'Bear' Bryant, its former football coach, against the mark HOUNDSTOOTH MAFIA as displayed on a houndstooth pattern. 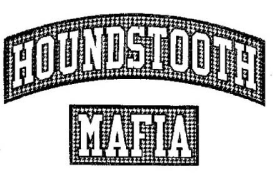 The opponents asserted, among other things, that the applicants’ mark:

Both assertions failed, despite the parties’ agreement that the public “associates houndstooth with Coach Brant’s hat, and fans wear houndstooth apparel... to show support for the university”.

College football is very popular in the United States. The University of Alabama football team has recently won three national championship titles, bringing significant exposure to the university’s trademarks. From 1958 until 1982, Alabama’s football team was coached by Paul 'Bear' Bryant, a colourful figure who wore a fedora hat with a houndstooth pattern. Coach Bryant frequently appeared on national television and in national magazines wearing the hat, and it became a staple of Alabama athletic lore. In 1988 the University and Coach Bryant’s estate opened The Paul W Bryant Museum and continuously used a logo containing the words 'Paul W Bryant Museum' with a likeness of Coach Bryant wearing a fedora hat with a houndstooth pattern.

The university attempted to show acquired distinctiveness with substantial evidence of media coverage referencing Coach Bryant’s patterned hat. However, such evidence did not establish any trademark association of the houndstooth pattern with the university. Hence, the TTAB stated that the “[opponents]' evidence does not get it into the end zone by proving it has trademark rights”. Despite the likeness of Coach Bryant and the houndstooth patterned hat in the PAUL W BRYANT MUSEUM mark, the TTAB found no likelihood of confusion with the HOUNDSTOOTH MAFIA mark, since the respective marks were different in their entireties.

The false suggestion claim turned on whether the applicants’ mark was a “close approximation” of the university or Coach Bryant’s identity. To be sufficiently close, the subject mark must do more than “bring to mind” an opponent’s designation; a greater degree of similarity is required. The TTAB readily dismissed the university’s claim because there was no showing that the university had used or promoted the houndstooth pattern as part of its identity. The TTAB dismissed the Bryant estate’s claim despite the applicants’ admission that their mark made reference to Coach Bryant’s hat because the HOUNDSTOOTH MAFIA mark merely brought Coach Bryant to mind (as admitted). The mark did not invade his persona by pointing uniquely to Coach Bryant.

Finally, as to disparagement, the TTAB recognised that 'mafia' may refer to organised crime. However, consumers would not reasonably associate organised crime with either the university or Coach Bryant. There was a more plausible association - the term 'mafia', viewed in context, referred to a group that supported rather than disparaged Alabama football.

Coach Bryant would be proud of the TTAB’s tenacity, as the opinion is over 70 pages long. Moreover, the opinion reaffirms important trademark fundamentals, including that mere popularity does not make a trademark.