Observations from the observatory

The European Observatory on Infringements of Intellectual Property Rights expands on its recent activities, including insights from its research project, the Quantification of IP Rights Infringement

On June 5 2012 the European Observatory on Infringements of Intellectual Property Rights was transferred to the Office for Harmonisation in the Internal Market (OHIM) from the Directorate General for Internal Market and Services in the European Commission, following a proposal by the commission which was backed by the European Parliament and the Council.

The regulation which made the transfer possible mandated that, once embedded in OHIM, the observatory should become a “centre of excellence on information and data relating to infringements of intellectual property rights, by benefiting from the Office’s expertise, experience and resources”.

The observatory hit the ground running with a series of studies. The first, released in 2013, was the now well-known IP Contribution Study. It was carried out in conjunction with the European Patent Office (EPO) and showed that IP-intensive industries account for one in every three jobs in the European Union and 39% of all EU economic activity.

That was followed in late 2013 by the European Citizens and Intellectual Property Study, which surveyed 26,500 people across the European Union to gauge what exactly EU citizens knew and thought about intellectual property. In June 2015 a follow-up was published – an economic analysis of IP rights and firm performance.

The firm-level study covers patents, trademarks and designs (and any combination of the three), but not copyright and geographical indications, which were part of the first study, because of their nature (copyright is not always registered, while geographical indications are not registered by individual firms). The study includes both European and national IP rights, which greatly improves the available data and provides a complete view of each company’s IP portfolio. It is based on official financial data drawn from over 2.3 million European companies.

The study goes on to show that about 40% of large companies own IP rights. Although only 9% of small and medium-sized enterprises (SMEs) do, this minority has almost 32% more revenue per employee.

The Quantification of IP Rights Infringement, the first two studies of which were released in 2015, attempts to put a figure on the scale of counterfeiting and its consequences for legitimate businesses, governments, consumers and society as a whole.

The studies are based on the premise that counterfeiting and piracy are secretive activities, which means that reliable data on the scale and scope of the problem is often hard to come by.

The first challenge for the OHIM research team was thus to develop a reliable, verifiable methodology which could be applied across sectors. The second challenge was to choose which sectors to investigate to provide a complete and objective picture of counterfeiting across the European Union.

The first study was released in March 2015, focusing on the cosmetics and personal care sector. This covers everyday items such as soap, perfume and aftershave, sun creams, deodorants, moisturisers, lipsticks, mascaras, shampoos and toothpaste – everything, in other words, that EU citizens have in their bathroom cabinets and make-up bags.

The figures were startling: €4.7 billion and 51,561 jobs were lost annually in this sector due to counterfeiting, with a further €1.7 billion every year in lost revenue (ie, social contributions and taxes).

This was followed in July 2015 by the second study, this time looking at the clothing, footwear and accessories sector. The figures were even higher here: €26.3 billion and 363,000 jobs were lost each year across the 28 EU member states as a result of counterfeiting. The effect on government revenue was even higher – a loss of €8.1 billion every year.

While each report in the Quantification of IP Rights Infringement series stands alone, it is also part of an overall body of research. This means that policy makers, businesses and those active in protecting and promoting the value of intellectual property can hone in on a particular sector for information and data, as well as having an overview of the impact of counterfeiting across the board.

To complement this work, OHIM has been collaborating with Europol on a comprehensive report into the state of counterfeiting within the European Union. The report, released in April 2015, draws on contributions from EU member state authorities and the private sector to identify the main traits of the counterfeiting phenomenon and provide illustrative case studies.

It paints a vivid picture of the sheer scale of counterfeiting across the European Union, both through traditional distribution channels (eg, fake goods travelling via land and sea) and new online channels.

It highlights the shift in counterfeiting production methods – improved and cheaper methods and technologies have allowed counterfeiters to move away from producing cheap knock-offs of clothes and accessories, for example. The range of counterfeit goods in circulation is vast. Fake pharmaceuticals (especially lifestyle pharmaceuticals), fake electronics, fake cosmetics and fake pesticides are all easily available, thanks to technological advances which counterfeiters exploit.

The question of how to tackle this problem is at the heart of much of the observatory’s work and has resulted in a multi-pronged approach, based on training, information sharing and the creation of innovative tools.

This year has also seen the creation of a European Intellectual Property Prosecutors’ Network, which covers EU member states and also involves Norway and the United States. The network is designed to help identify effective actions to facilitate and support authorities dealing with the investigation and prosecution of counterfeiting and piracy, as well as to enable knowledge and information sharing. Organised by OHIM and Eurojust, it held its inaugural meeting at OHIM’s Alicante headquarters in June.

Knowledge-building events for enforcement authorities and other experts from across the European Union continue to be organised jointly with Europol and Eurojust. Six events have taken place so far covering a wide range of subjects, from counterfeit medicines, pesticides and car parts to IP crimes in sport.

Sectoral and regional seminars with public sector authorities have also been held in order to create regional geographical networks.

This year, a workshop for Mediterranean countries took place in Bari in Italy in May, while another for Central and Eastern European countries is scheduled for Budapest in November. This follows successful workshops for the Balkan and Nordic regions held last year.

Meanwhile, IP rights enforcement-related matters continue to be discussed at seminars and symposia of the judges’ network managed by OHIM. Since 2012 15 seminars and one symposium have taken place, attracting judges from all member states. 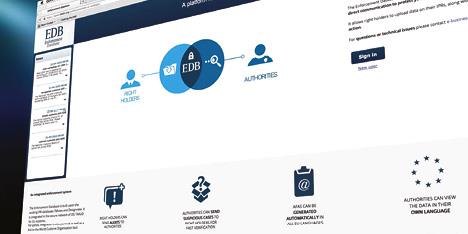 The Enforcement Database allows rights holders to record information about their IP rights, which can then be accessed by customs authorities across the European Union

At the same time, the observatory has been moving ahead with the expansion of the Enforcement Database (EDB), which acts as a bridge between rights holders and enforcers.

The EDB allows rights holders to record information about their IP rights, including product information, distinguishing features, transport routes and anything else they think might help enforcers to distinguish their genuine products from counterfeits.

Customs authorities across the European Union can then access this information via the secure network developed by the European Commission’s Directorate General for Taxation and Customs Union. The EDB is available in 23 EU languages. It also allows applications for action – requests for EU customs authorities to take action against infringing products – to be electronically generated.

Over 200 companies use the database and all EU customs authorities have joined it, as have the Guardia di Finanza in Italy and the Guardia Civil and National Police in Spain. There are plans for it to expand further in the future.

As the observatory fulfils its mandate to become a centre of excellence on information and data relating to IP rights, a joint study with the Organisation for Economic Cooperation and Development (OECD) will estimate the value of counterfeit goods in international trade. Meanwhile a second study, carried out with the support of the Joint Research Centre of the European Commission, will examine infringement in the music, film and e-book industries.

Also forthcoming are scoreboards – one showing IP use and awareness among SMEs and another focusing on young people and their attitudes to intellectual property. This research will bring more evidence and data into the policy sphere, underlining the importance of intellectual property in our society and the need to protect it.