In order to celebrate the 70th birthday of its Andrélon shampoos, Unilever, which is notably active in the cosmetics sector, launched an anniversary edition of the shampoos under the name Champagne Shampoo in the course of the summer of 2010. The shampoo was put on the market in the following packaging (some bottles bore a gold neck-hanger, as seen on the right): 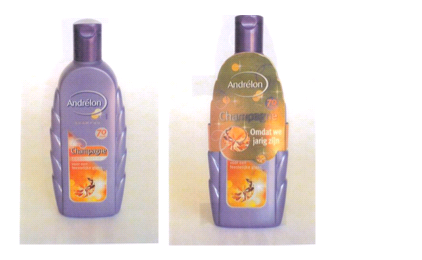 The launch of the anniversary product was accompanied by an advertising campaign on television, the internet and billboards, as well as in the press. A television commercial, in which characters of previous Andrélon commercials bring a toast to Andrélon with a glass of champagne at a garden party, was broadcast approximately 500 times. This commercial ended with the following image, which contained the slogan “Champagne Shampoo. For a festive glow. Special edition, hurry to the shop”: 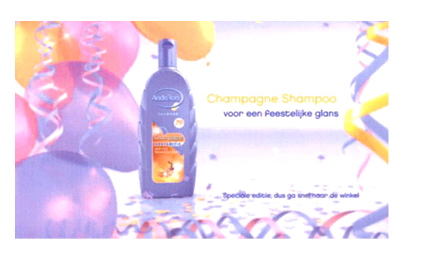 The advertising campaign also involved the publication in the press of the following advertisement, which contained the slogan “Champagne everyday. Particularly for our 70th birthday”: 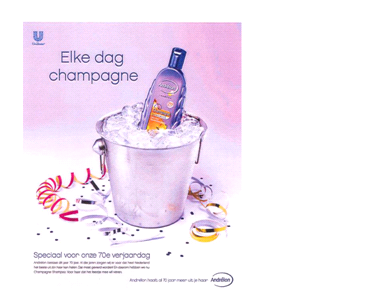 The Comité Interprofessionnel du Vin de Champagne (CIVC), a semi-public body representing the common interests of champagne houses and champagne wine-growers, addressed a cease and desist letter to Unilever at the beginning of August. However, the letter led only to:

Unilever thus continued to supply and promote the product.

On September 2 2010 CIVC initiated summary proceedings before the Court of ‘s-Gravenhage. The oral hearing took place on September 24 2010. The action was based on the alleged infringement of Article 118m of Regulation 1234/2007 establishing a common organisation of agricultural markets and on specific provisions for certain agricultural products, as amended by Regulation 491/2009. Article 118(m) provides for the protection of designations of origin for wines, such as champagne. According to Paragraph 2(a)(ii) of this provision:

In its decision of October 8 2010, the Dutch court found that there had been infringement of Article 118m(2)(a)(ii). By way of relief, the court:

Unilever also argued that ordering the recall of products that were still on the shelves of its resellers (as opposed to those in distribution centres) was disproportionate. However, the court emphasised that the presence of products on the shelves more than two months after the cease and desist letter was sent resulted only from Unilever's actions. As Unilever could have recalled the products immediately upon receipt of the letter, the court considers that the recall measure, as well as the logistic and financial efforts associated with it, were not disproportionate.

Turning to the costs of the proceedings, the court stressed that geographical indications, such as PDOs for wines, are fully fledged IP rights, as referred to in the Agreement on Trade-Related Aspects of Intellectual Property Rights and the IP Rights Enforcement Directive (2004/48/EC).

This decision is significant, as it seems to be the first time that a national court in the European Union has granted injunctive relief and related measures for infringement of Article 118m(2)(a)(ii) of Regulation 1234/2007.

The protection of PDOs for wine was introduced into the EU legislation on April 29 2008 through Regulation 479/2008 on the common organisation of the market in wine. Article 118m(2)(a)(ii) of Regulation 1234/2007 prohibits third parties from free-riding on the coat-tails of a PDO for wine or attempting to trade on its reputation. Such protection already existed for (other) agricultural products and foodstuffs (see Regulation 510/2006, previously Regulation (EC) 2081/1992) and was also introduced in 2008 for spirits (Regulation 110/2008).

At the national level, protection against the 'exploitation of reputation' has been achieved through unfair competition legislation, specific legislation and/or general civil law principles. Article 118m(2)(a)(ii) of Regulation 1234/2007 now also provides for a European legal basis in this respect. It does not contain any limitation as to the type of product or type of commercial use.

The facts underlying the present case provide a classic example of 'exploitation of reputation'. The PDO champagne was used in connection with shampoo in order to benefit from its tremendous power of attraction, reputation and prestige for promotional purposes. The image and characteristics associated with champagne were being projected to the Andrélon products, thereby increasing its status and facilitating its marketing, even though no efforts had been expended by Unilever in order to build and maintain that image.

Although trademarks and PDOs are distinctive signs of a very different nature, some parallels are regularly established between PDOs and the scope of protection conferred to trademarks with a reputation in the European Union. In any case, it is obvious that the reputation and image linked to both types of distinctive signs can now enjoy a comparably broad protection under EU legislation.

This EU-wide legal basis for protection against 'exploitation of reputation' attached to PDOs for wines is a considerable leap forward. The Dutch decision should thus be welcomed as a first example of the protection provided under the recent EU regulations on PDOs for wine.