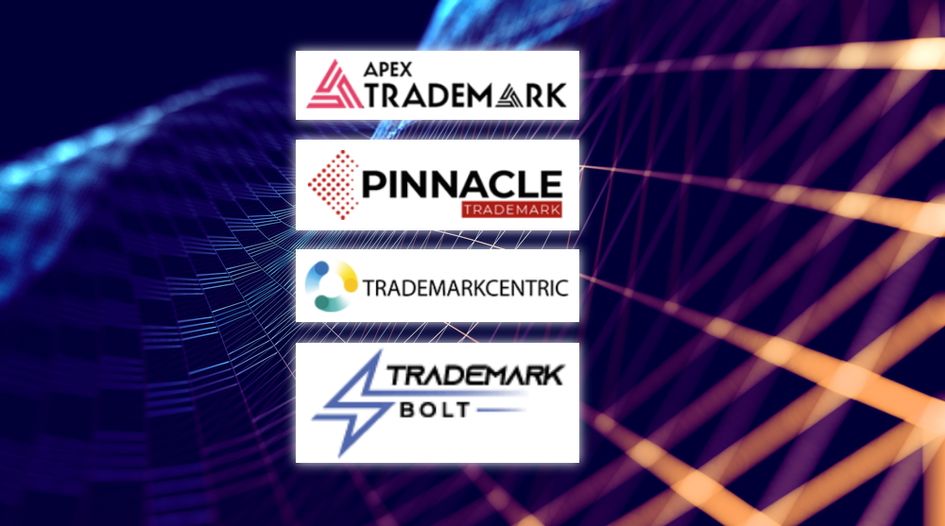 A number of new low-cost filing platforms have emerged as advertising on trademark-related search terms on Google, and they bear striking similarities to those owned by Pakistan-based entities that have been punished by the USPTO for fraud. In investigating these platforms, WTR identified a chatlog where a representative of one of the platforms accuses a potential client of stealing a trademark and threatening legal action after being asked basic business questions.

Since February 2021, WTR has reported on a rise in schemes targeting US trademark users via platforms purporting to offer low cost trademark services. There was evidence that some of these platforms, including Trademark Terminal, were linked to unusual activity on thousands of US trademark applications and that thousands of dollars were being spent on Google Ads to attract new clients. While these platforms claimed to be based in the United States, WTR repeatedly highlighted that they appeared to be located in Pakistan. In July 2021, for example, WTR revealed evidence that directly linked one mass-fraud operation to a Karachi-based IT company called Abtach Ltd. Four months later, the USPTO issued a strongly worded show-cause order to Abtach, accusing it of unprecedented fraud (in January 2022, Abtach was banned from USPTO practice and had its ads account blocked by Google).

This week WTR identified four more filing platforms that share striking similarities with entities we have previously reported on. Each of the platforms – Apex Trademark (‘apextrademark.com’), Pinnacle Trademark (‘pinnacletrademark.com’), Trademark Bolt (‘trademarkbolt.com’) and Trademark Centric (‘trademarkcentric.com’) – have advertised on Google in the past month (see below), with the ads being similar and making potentially misleading claims (eg, ‘$49’, ‘million brands registered’, ‘official filing’, ‘100% success rate’). The ads are also similar to those used by Abtach platforms like Trademark Terminal, which boasted of registering half-a-million trademarks and claimed it could do so for $49 (screenshot here). Some of these new ads also boast that the entity has won ‘best attorney awards’. However, there is no information on any of the websites identifying awards or licensed attorneys (in instances where ‘attorneys’ are named and pictured, the photos are from stock image websites [example]). 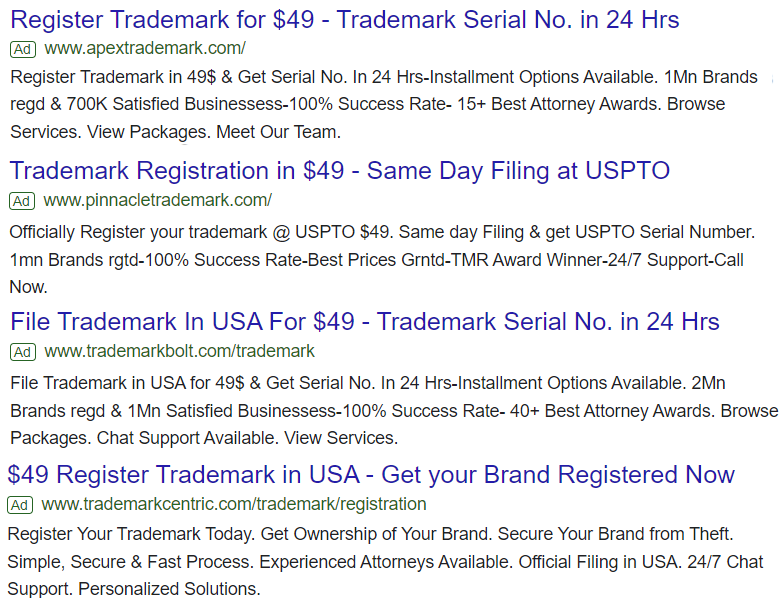 The ads are appearing widely on the US edition of Google in searches related to trademarks. According to analytics platform SpyFu, Pinnacle Trademark has an estimated monthly Google Ads budget of $22,700 across 456 search keywords; Apex Trademark has a $15,270 monthly budget on 225 keywords; Trademark Centric has a $747 monthly budget on 20 and Trademark Bolt has a $541 monthly budget on 46 keywords. The search terms being targeted by the platforms are generally related to trademarks and copyright, including ‘trademark logo’, ‘trade mark’, ‘how to register a brand on Amazon’, ‘file a trademark online’, and ‘copyright business name’.

As well as Google ad similarities, the platforms also share identical pricing structures (see below) – starting at $49 (plus USPTO fees). That lowest-tier includes such promises as ‘trademark secured’ and ‘100% satisfaction guaranteed’. Only the most expensive $399 tier includes an ‘attorney service’. Furthermore, all the websites are strikingly similar in their design (including the same menu bar items), and they have an identical copyright notice at the bottom of each page (“Copyright © 2001-2022”). 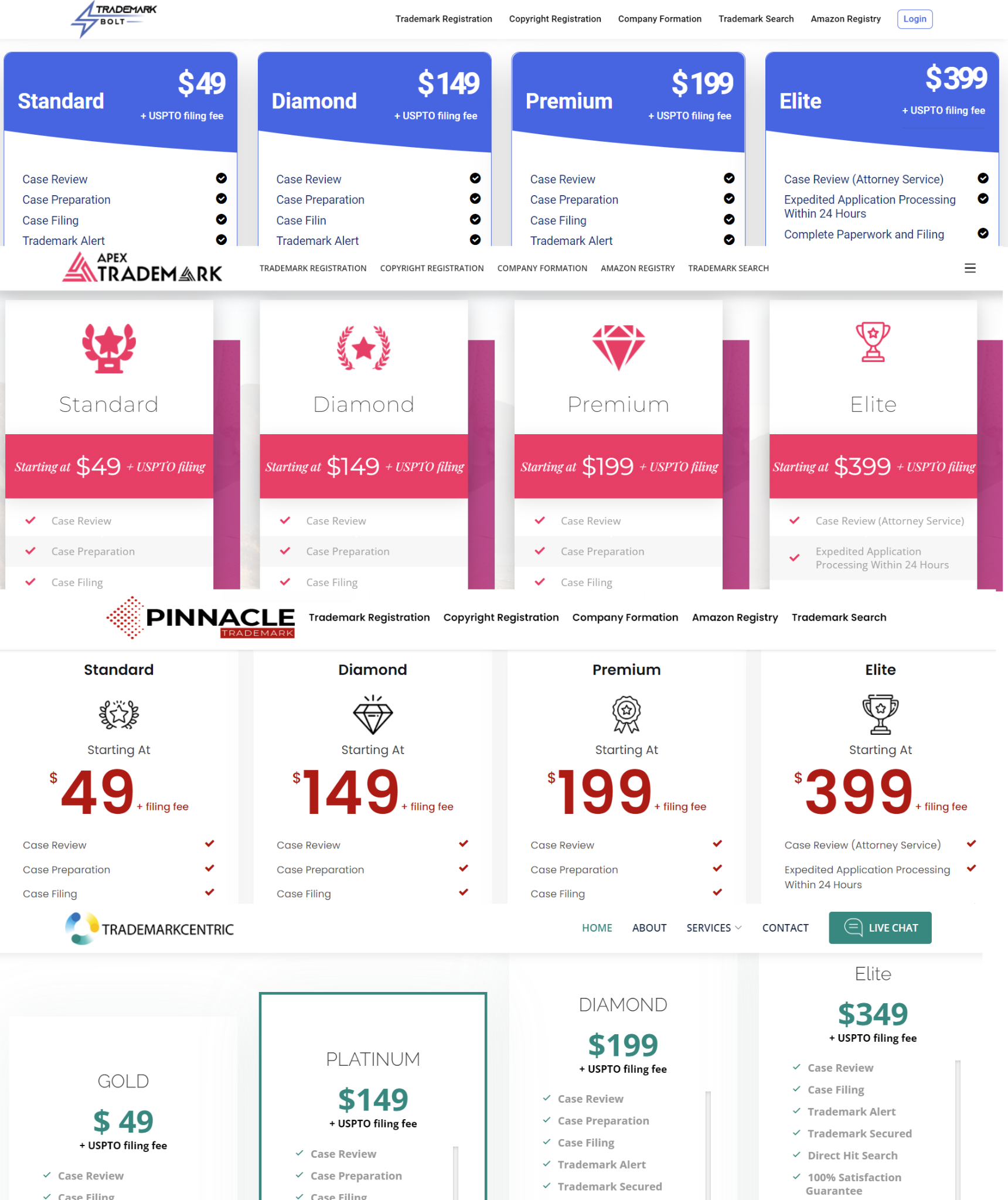 WTR has identified at least two applications at the USPTO related to the entities. The first is mentioned by a user on TrustPilot, who posted a recent positive review about Trademark Bolt’s “outstanding job” in filing a trademark application for their business. The application in question, for the term WOLF COOK, was filed on 17 March 2022.

This exact same behaviour was exhibited by Abtach’s entities, as first identified by WTR. According to the USPTO (on page 15 of its show-cause order), the tactic allowed the now-banned agencies to send doctored USPTO documents to clients with inflated fees. “Respondents send the applicants the doctored versions, passing them off as the actual USPTO filing receipts and office actions, to overcharge the applicants and pressure them into paying for unnecessary services,” the show-cause order claimed. “The practice of doctoring official USPTO correspondence, representing that more goods and services were filed for than actually were included in the application and inflating the filing fees, appears to be part of the standard business practices of [Abtach entities].”

It is important to clarify that these latest entities are not confirmed as being linked to Abtach or conducting any fraudulent activity, but their similarities with previous platforms will create concern. Crucially, none have responded to our queries.

WTR contacted each of the platforms via their live chat function to ask questions about their business and operations. A representative for Apex Trademark, ‘Mark Freeman’, appeared to be aware of the messages on the other platforms, but refused to answer any of our questions. “There are no questions that I believe worth an answer,” the representative told us, before blocking WTR from the live chat function across all of the platforms.

The refusal to share any insight into its operations is not a one-off occurrence. On ScamWatcher, a website dedicated to warning consumers about potential fraud, a full chat transcript with an Apex Trademark representative was recently posted. In it, a user described how the representative “became very rude when I asked for information to verify the company” after being asked to pay nearly $1,600 for help on a trademark filing. The questions are relatively routine when it comes to checking the authenticity of a business – eg, asking where the company is located, the name of its licensed attorneys – but the representative, ‘Mark’, either refused to answer, changed the subject or outright lashed out.

For example, when the user asked for the name of attorneys or a business address to verify that Apex Trademark is legitimate, the representative asked, “why would I give this information to someone I don't know?”. When the user subsequently informed them that they will not be using the agency, the representative responded: “Thank you for not doing business with us. You [stole] someone else's tagine and logo and [tried] to trademark it [to] put them out of business. Was it fair with them? I will approach [the] other party and if necessary I will have my attorney send you [a] cease and desist letter on behalf of the other party and [your] wish of knowing us will be [fulfilled] as well. Good luck.”

Threatening a potential client with legal action is, obviously, highly unusual and concerning. Just as striking across both chat transcriptions is the refusal to offer any information to verify the authenticity of the business.

While the entities confirmed to be fraudulent by the USPTO are no longer able to advertise on Google, one legal expert expressed concern about the ease of setting up new platforms targeting potential filers.:  “Google appears to have only blocked those specifically enumerated by the USPTO’s show-cause order. However, they have done nothing to stem the tide of the obvious scams advertising on their site.”

These latest findings will raise alarm bells, with activity potentially harmful to applicants and also trust in the entire trademark industry ecosystem.

Previous WTR coverage on issues related to suspicious low-cost trademark agencies can be read below: