‘Middle finger’ bottle design not registrable as a trademark

In In re Luxuria sro (Serial No 79055664, September 19 2011), the Trademark Trial and Appeal Board (TTAB) has affirmed the denial of registration as immoral or scandalous of a bottle in the shape of a hand with its middle finger extended upwards, as shown below: 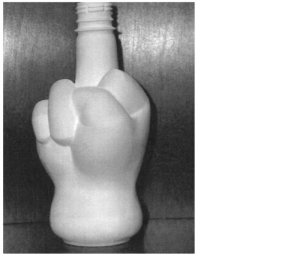 Section 2(a) of the Trademark Act, 15 USC § 1052(a), prohibits the registration of a mark which “consists of or comprises immoral... or scandalous matter”. A showing that a mark is vulgar is sufficient to establish that it falls within the scope of this prohibition on registration. The US Patent and Trademark Office “must consider the mark in the context of the marketplace as applied to the goods described in the application”. Whether a mark consists of, or comprises, scandalous matter must be determined from the viewpoint of a substantial segment of the general public and in the context of contemporary attitudes.

The record consisted of several dictionary definitions of the meaning of a raised middle finger and numerous articles about the middle finger gesture, which the TTAB quoted at length. The TTAB also took judicial notice of additional definitions of this gesture in mainstream dictionaries, and found that all of this evidence supported the conclusion that the gesture depicted in the applicant’s mark was vulgar. The TTAB noted that one of the definitions characterised the gesture as “obscene”, and pointed out that “[d]ictionary definitions alone, if a term has no other meaning, are sufficient to satisfy the office’s burden of showing that the mark is scandalous to a substantial composite of the general public”.

Moreover, the application covered alcoholic and non-alcoholic beverages, which are general consumer products purchased by the public at large. The applicant stated that the goods will be sold through shops, supermarkets and similar outlets. Because the channels of trade include supermarkets, where goods are normally displayed on retail shelves, the mark will be visible to all consumers, including parents shopping with their children. The TTAB observed that, “even if some individuals might personally find bottles ‘giving the finger’ funny, many, if not all, of those individuals would not find it funny to expose their children to such a configuration”.

The TTAB rejected the applicant’s argument that, when the middle finger gesture is not directed to a particular individual or group, it is not immoral or scandalous as contrary to the extensive evidence of record concerning the meaning of this gesture. The TTAB acknowledged that one of the definitions for 'the finger' is that it “can be a strange, friendly greeting for some”. There were also reports in some articles of people making the middle finger gesture in a film, a television program or in a political situation, but the TTAB did not view these limited instances as showing that the gesture is acceptable to a substantial composite of the general public. The fact that instances of notable people using this gesture were reported “indicates that the gesture is so shocking that a celebrity making the gesture is noteworthy”.

The TTAB also compared the applicant’s mark to its verbal equivalent:

“Not to put too fine a point on it, the gesture depicted by the applicant’s mark is the visual equivalent of an extremely offensive expletive. Just as these words would be considered scandalous and immoral if used as a trademark, even if it was not clear to whom the insult was directed, the visual depiction of these words by the finger gesture shown in the applicant’s mark is equally scandalous and immoral.”

Based on all of the evidence of record, the TTAB held that the office had met its burden of showing that the mark applied for comprised matter that would be regarded as vulgar by a substantial composite of the general public and, therefore, was scandalous or immoral and not registrable.