In the first of a new regular magazine section focused on data-led trends we look at Mexico and how brands fare in the country, examining key filing statistics, top industries and the performance of the Mexican Trademark Office to determine areas of opportunity and risk

Pulling ahead in Latin America

Mexico is verymuch a branding force: in the latest annual report of the world’s most valuable nation brands by Brand Finance, it ranked 13th overall (see http://brandfinance.com/images...) and is not only the most valuable nation brand in Latin America, but also the strongest. It also appears among the World Intellectual Property Organisation’s top countries for trademark registration activity and is marked for its huge potential in economic growth, alongside other key Latin American jurisdictions. The appeal of Mexico as a business location has helped to draw in myriad brand owners hoping to expand their influence in the country and the wider Latin America region. For example, the country has become a key target market for Nike, adidas and other international sports brands. Bloomberg has even recently named it the most alluring emerging market for investors; according to several projections, Mexico is on track to be the fifth largest economy in the world by 2050. 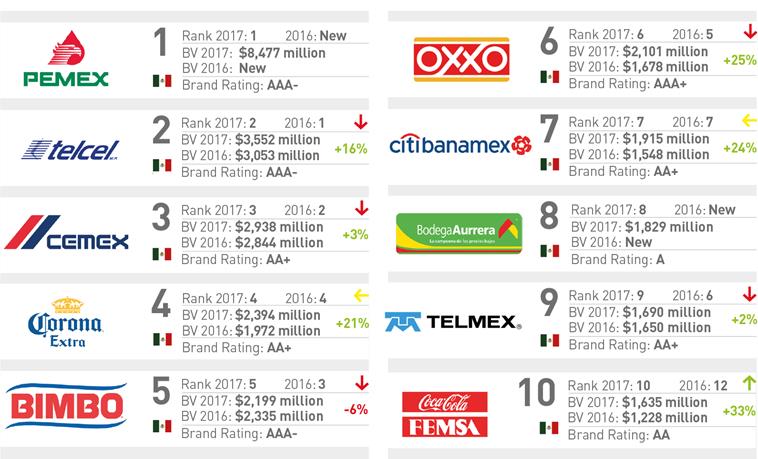 Figure 2: Applications by origin at IMPI 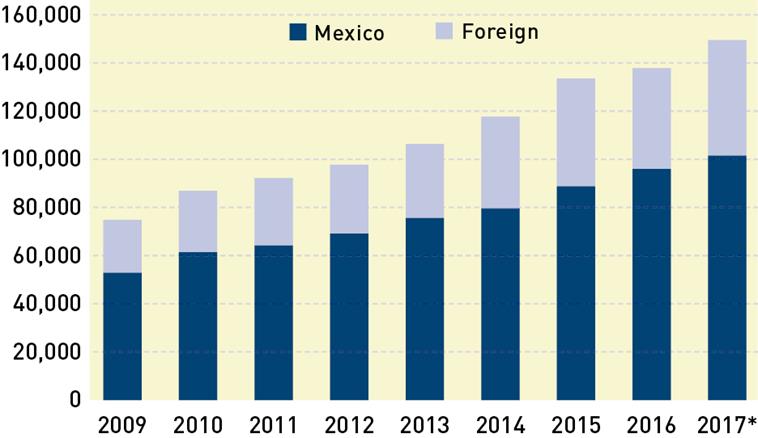 Despite this, few Mexican brands appear in Brand Finance’s 500 most valuable brands – only Pemex and Telcel make it on the 2017 list. However, Mexico’s top brands have demonstrated reliable growth, with seven of the top 10 having increased in brand value compared to the previous year. OXXO also received the highest rating possible for brand strength – an achievement that only 10 of the world’s 500 most valuable brands can boast.

Pemex’s arrival at the top of the table follows Mexico’s recent reform of the energy industry, which ended a 75-year ban on foreign involvement and ended Pemex’s monopoly within the oil and energy sector – meaning that the state-owned petroleum company is now comparable to other brands across the globe. Opening the market to global competitors will no doubt prove challenging for Pemex, but it is also an opportunity for international brand owners in the energy sector hoping to expand their influence in Latin America – especially as Mexico’s oil production has declined and the country is predicted to become a net importer of oil by 2020.

Figure 3: Applications by foreign applicants by nationality at IMPI (2017) 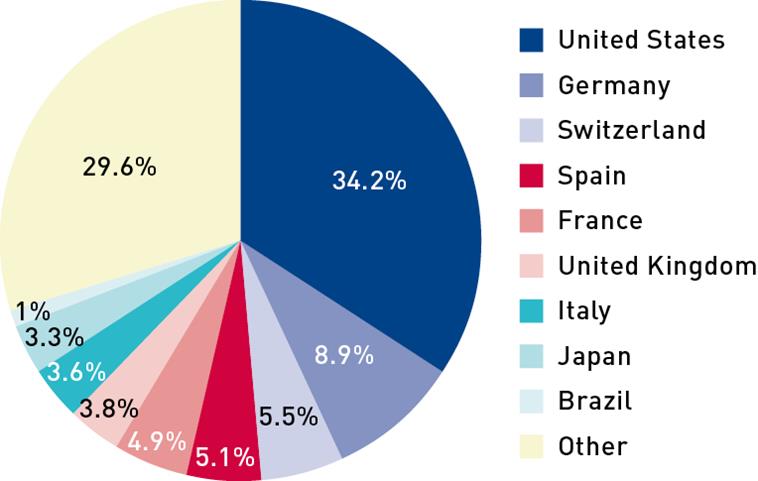 The country also passed new laws in 2014 to increase competition in the telecommunications sector; these saw AT&T – the most valuable brand in this space – enter the local market. This has placed additional pressure on local companies, especially fellow telecoms giant Telcel. The alcoholic beverages, banking and retail industries also feature prominently among high-powered Mexican brands, with the retail sector generating more brand value than any other industry. Mexico is a diverse market for brand owners, but businesses in these sectors have proved especially effective.

Given Mexico’s diverse sectoral strengths and potential as a promising emerging market for international rights holders, it comes as no surprise that trademark filings have been consistent and robust.

With the exception of a slight dip in foreign filings in 2016, the Mexican Trademark Office (IMPI) has enjoyed strong year-on-year increases of roughly 8% in both domestic and foreign filings. The dip in filings in 2016 can be at least partially attributed to the election of Donald Trump, given that the drop came principally from US applicants, which make up by far the largest proportion of foreign applicants (see Figure 3). Trump’s protectionist policies caused some to fear that Mexico’s economy would suffer a significant setback. However, domestic demand has remained resilient, while opening specific markets to international competitors has helped to keep foreign filings looking healthy. In fact, filings from US applicants are on course to increase back to 2015 levels again this year, while the government has presented a budget proposal with a boosted growth outlook for the country. This is good news, particularly for domestic and international law firms which rely chiefly on their prosecution practices for revenue generation and those with a strong US client base. However, the unpredictability of the current US administration continues to hang over Mexico: Trump’s attack on the North American Free Trade Agreement (NAFTA) continues to threaten stability throughout all of North America.

Twenty-three of the top 30 filers in 2017 are domestic brands (with five of the remaining seven being US brands), showing the strength of local businesses in the branding sphere. Although, as seen from the previous year’s applications, the list has fluctuated greatly.

In terms of where Mexican trademark owners are looking towards, proximity clearly plays a major role, as the figures are dominated by IP offices in the Americas (see Figure 4). The United States remains the most popular destination for Mexican brands, although applications there have remained fairly stable. Meanwhile, there has been a sharp rise in preference for Argentina, Brazil and Guatemala. China is the only country among the top locations outside of the Americas, and filings there are on an upward trajectory, highlighting the importance of China as a target market for brand owners in Mexico, as it is for rights holders around the world.

Figure 5:Applications of goods versus services by percentage (2010-2017) 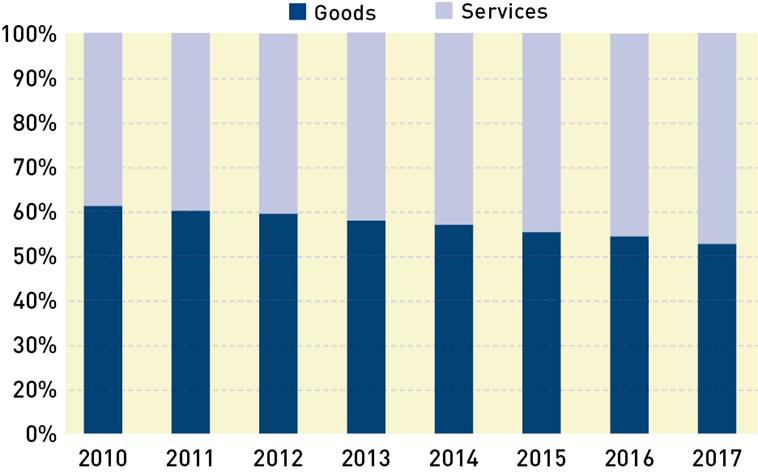 Trademark-intensive economy with a growing focus on services

Although many countries have observed a gradual shift from the production of goods to the provision of services, this change has been particularly pronounced in Mexico, which has been reflected in the trademark filings, with the number of marks for services overtaking goods for the first time in 2016.

This should not be too unexpected, considering that services play a critical role in Mexico’s economy and, including the government sector, make up approximately 63% of the country’s gross domestic product (GDP). The country’s lively start-up scene also revolves around the provision of services. This is a trend that is unlikely to reverse, so parties interested in expanding their rights in Mexico should bear this in mind. A report by the International Trademark Association’s (INTA) Impact Study Committee has further identified 19 trademark classes that correspond to trademark-intensive activities in Mexico (see www.inta.org/INTABulletin/Page...).

The economic activities associated with these 19 trademark classes account for 20% of total employment. This figure is considerably higher than that for other countries (Colombia, Panama and Peru) profiled in the report, with the exception of Chile; it is also greater than the corresponding figure for the United States (16%), demonstrating the importance of brands in Mexico. Although the same activities made up only 15% of total GDP (compared to the approximately 30% share of more developed countries), the study notes that the significant difference in economic pattern of Latin American countries should be kept in mind for context. For example, important commodities sectors are not as trademark heavy. For Mexico specifically, oil, infrastructure and storage services account for almost 25% of total GDP.

Figure 6 illustrates the percentage of filings in Mexico across all 45 Nice classes, compared to the average class filings across 185 registers. The emphasis on services (Classes 35 to 45) is again apparent, with filings in virtually all of those classes surpassing the average. This is especially true for Classes 35 (advertising and administration) and 41 (education and entertainment services), the two most popular filing classes in the country. Although Class 9 (computer software and hardware) is noticeably lower in Mexico than the average, it is also the most popular class for US applicants in Mexico (making up almost 10% of filings by US applicants). Robert Reading, director of custom and managed solutions at CompuMark, suggests that this could be about protecting a manufacturing base rather than a sales market. Class 13 (firearms) is the least used class (and practically unused by US applicants). Although this may initially seem surprising since firearms are legal on both sides of the border, this is likely due to Mexico’s strict gun laws and the fact that there is only one store in the country where customers can legally purchase firearms – the store is also barred from advertising itself and to receive a gun, one must overcome numerous bureaucratic obstacles.

Much of the success of Mexico’s trademark landscape can be credited to IMPI’s efforts, although the office clearly has room to improve. In World Trademark Review’s innovation index of IP offices, IMPI appears below the IP offices of Chile, Brazil, Colombia and Argentina, as well as many others. In particular, it was held back by its lack of regular release of trademark research and its only partial success with regard to regular liaison with enforcement agencies. Indeed, concerning the latter, Mexico has been identified as the main source of infringing alcoholic beverages being shipped into the European Union and it was placed on the Priority Watch List of the Office of the US Trade Representative’s 2017 Special 301 Report.

However, there is reason to be hopeful about IMPI’s long-term prospects. In its 2016 annual report, the office emphasises that although the figures have mostly remained constant (with trademark applications having grown), it has been a year of achievements, having implemented several planned initiatives. Among these initiatives, it has continued to increase its trademark promotion efforts and the level of collaboration with other agencies. It has also participated in more activities on an international scale. On another positive note, the difference in its income and expenditure has remained consistent, with both being on the rise. 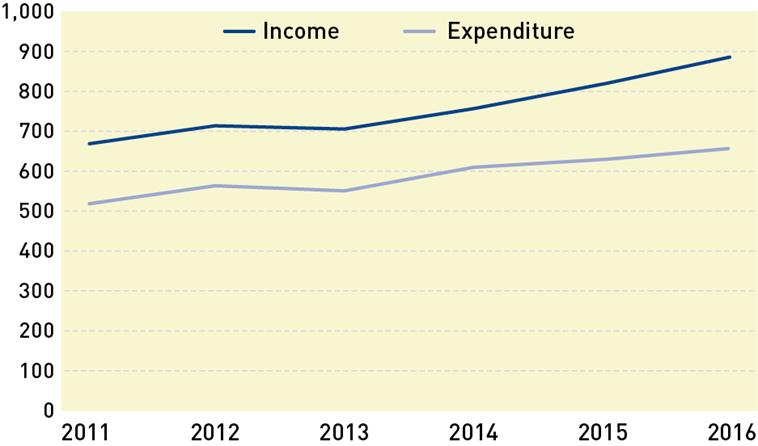 Improvements have also come in the form of legal and administrative developments. It is just under five years since Mexico acceded to the Madrid system and one year since it launched its formal trademark opposition system. However, both systems have not been without their share of issues. For the Madrid system, complaints have been directed at its cost effectiveness. The new trademark opposition procedure has mostly been received well, but commentators note that it leaves much to be desired. Jorge León, attorney at law at C&L Attorneys, avers: “It has become a cost-effective tool for trademark owners to assist examiner attorneys, but its effectiveness remains questionable since the examiner attorney may simply not consider the arguments contained in the opposition.” Alberto Huerta Bleck, partner at Calderon & De La Sierra, adds: “The system could be further improved by including the suspension of the procedure, an extension of the term to be able to gather and submit evidence and recognising the opposer as a party.” According to CompuMark, roughly 5,000 applications have been opposed so far. However, IMPI publishes only the application number and opposition, and not the mark or applicant, which compounds the problem of ineffectiveness.

Despite continued uncertainty over Mexico’s relationship with the United States and specifically uncertainty with regard to NAFTA, the country has proven to be a dynamic and healthy market for trademark owners. The solid growth of both domestic and international filings will provide local firms with consistent revenue, while the scope for economic progress is positive. Global rights holders also benefit from the market continuing to open up to foreign competitors, which makes Mexico an appealing option for those hoping to break into and expand into the Latin America region.

Timothy Au is a data reporter with World Trademark Review, based in its London office
[email protected]