Messaging apps have overtaken social networks in total user numbers and many are now embedding payment methods on their platforms, creating yet another challenge for brand owners

According to the International Chamber of Commerce, brand infringement is a trillion-dollar business, generating twice the annual revenues of the arms and narcotics trades combined. Because counterfeiters adapt to changing enforcement strategies and are constantly finding new ways to attract customers, it is also a rapidly evolving industry. One emerging trend which needs to be monitored closely is the transformation of mobile messaging apps into marketplaces – and the opportunity this presents not only to legitimate businesses, but also to anyone wanting to profit from somebody else’s hard-won reputation.

“We can copy everything except your mother” may be an old Chinese joke, but it is no laughing matter for rights holders. China is the epicentre of global counterfeiting, producing over 2 billion fake goods annually, according to the World Customs Organisation. Couple that with the proliferation in social media and the availability of counterfeit items has soared, with apps such as WeChat and its 700 million users providing a platform for the sale of fake products. In 2015 WeChat received some 13,000 IP complaints, 55% of which concerned trademark infringements. But when it comes to messaging apps, what do rights holders need to be aware of?

Businesses get on board

In a few short years, apps such as Snapchat, Line, Kik, WeChat, Telegram, Viber and WhatsApp have amassed well over 1 billion users – and they are still growing. A recent report found that users spent longer on WhatsApp (an average of 18 minutes daily in the United Kingdom) than on Facebook (14 minutes). While most of this time is spent chatting with friends and family, people are starting to use these apps for more than just communication. Naturally, this trend is attracting brands and marketers, which see the abundant potential they present. In fact, some apps – notably WeChat – are now less about messaging and more about integrating services, essentially morphing into mobile operating systems.

As Figure 1 illustrates, mobile messaging apps have now overtaken social networks in popularity. It is not only the sheer number of users which attracts both businesses and infringers, but also the high usage and retention rates. Add to that the fact that most users are young – always an attractive demographic – and it is easy to see why mobile messaging apps will continue to offer both opportunities and risks for rights holders.

However, Facebook, WeChat and other social networks are now expanding their offering to allow users to send payments to each other through private messages. Twitter is also facilitating the exchange of messages between businesses and their customers. Can full-blown e-commerce be far behind? 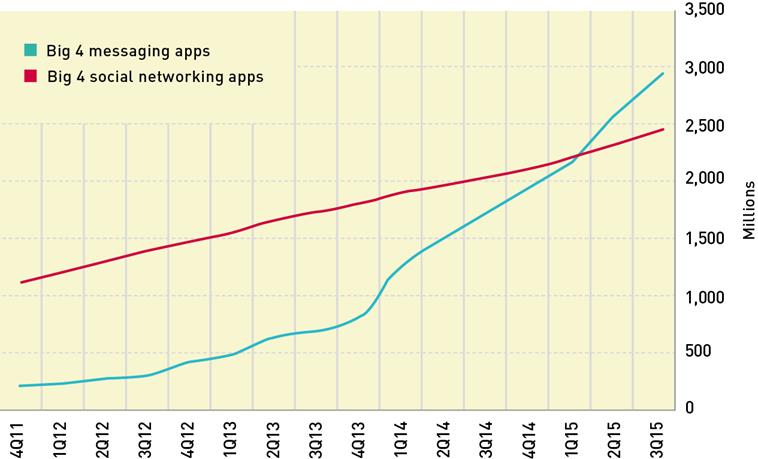 While the risks of transacting business online are already well known, these are magnified when you use a messaging app, as it becomes impossible for brand owners to monitor transactions. Unlike on traditional online marketplaces such as Alibaba, Taobao and Amazon, fake products sold through a messaging app are much harder to identify. If app providers fail to take steps to prevent the sale of fake products, policing can be extremely complicated and resource intensive.

Messaging apps are private – it is illegal to moderate private communications – which makes them especially attractive to counterfeiters. Contact is first established on Facebook, Twitter, Instagram, Alibaba or one of the many other platforms available. After this, buyer and seller typically complete the transaction in the safety and anonymity of WeChat or Line.

In 2015 WeChat introduced a trademark protection mechanism involving 93 trademark owners and covering more than 300 brands, including leading luxury luminaries such as Louis Vuitton and Chanel. Under this, WeChat’s IP team will now block or erase infringing content. The publisher is given three warnings, but if the problem persists the offending account is closed. The drawback is that it is relatively easy to open another account – all you have to do is submit a new mobile phone number which is more than a month old. Recently, WeChat also launched a customer complaints service, allowing users who have identified fake products to refer the problem to the relevant rights holder. Despite challenging circumstances, it is clear that WeChat is taking IP protection seriously – although much remains to be done.

Another hopeful sign is Alibaba’s recent announcement that it intends to expand Operation Cloud Sword to form a collaborative Cloud Sword Alliance. The company has said in a statement that it “not only wants to crack down on counterfeit goods on its platforms, but it also wants to crack down on counterfeit goods for the entire industry and society at large”. Further, Alibaba has committed to cutting off illicit sales channels “via messaging tools such as QQ and WeChat”.

Never underestimate the ingenuity of online criminals. For example, even though mentioning WeChat is prohibited on platforms provided by the Alibaba Group, ever-creative counterfeiters have found a way around this by including their WeChat contact details in photos.

However, there are proactive measures that rights holders can take. The following checklist is a good place to start:

Enables Facebook users to communicate through their smartphones. All operating systems support this app.

Risk profile: Like most other instant messaging apps, Messenger has its eyes on mobile payment services. Users link their card details to the app and transfer money using the chat function. Facebook Messenger is regarded as safer than Snapchat, which may account for it being used by more cautious buyers.

The second most popular messaging app globally; it is ad free and easily installed.

Risk profile: It is possible to set up groups to communicate inside the app. However, all group members must be in the group owner’s address book, which severely limits sales activity.

Very popular in China, WeChat is a free messaging tool which is gradually morphing into a mobile operating system, with numerous features and services.

Risk profile: With almost 750 million users, WeChat is a fully integrated part of daily life in China. Users pay for every conceivable product or service via the app. Currently, WeChat poses a significant risk to rights holders, as traffic shifts from online marketplaces to the privacy and anonymity of messaging apps.

Line is a free app which allows users to make calls and send messages. Popular in Asian countries, it provides numerous differentiating features such as group, video and voice calls, stickers and timelines.

Risk profile: Allows users to transfer payments to contacts from within the app. Provides a hidden chat function which keeps conversations private by enabling users to set a self-destruct timer on texts, pictures and files.

Risk profile: Does not offer a money transfer service – users are referred to Paypal. However, all the important arrangements can be made via Skype.

Messaging app popular with younger users. Unlike other apps, Kik does not require a phone number for registration. Users have usernames and a group chat can hold up to 50 people.

Risk profile: Kik’s anonymity features go beyond most other apps, which has attracted illicit users.

Risk profile: Only for private use, making it much harder to monitor.

Free to use, Snapchat is wildly popular with teenagers and enables live video conversations.

Risk profile:Easy to get followers to an account and then reach out to them. Each image comes with an expiry date, making it extremely hard to monitor. It is possible to send money to friends or sellers through the app’s chat function (Snapcash).

Features include photo sharing, voice calls and voice notes. Can be downloaded for free on Android, iPhone and BlackBerry. BBM provides unique features to protect the privacy of users, including the ability to take back photos and messages after sending them.

Risk profile: Users determine who they wish to be contacted by. However, you can join groups without having the group members in your contact book. It is possible to subscribe to a BBM channel and join chats with others who “share your interests”.

Offers seamless integration between smartphones, PCs and tablets. Conversations are stored in the cloud and synced across all registered devices.

Risk profile:Unlike WhatsApp, Line and Signal, it does not provide end-to-end encrypted messaging by default (only optional) – a decision that has been widely criticised due to the security risks. Users can send messages without displaying their phone numbers. Further, the app’s strict privacy policy is attracting illegal activity.

One high-profile brand – let’s call it Brand X – did indeed see the risks associated with mobile messaging apps early on and wasted no time in protecting its interests.

Brand X realised that WeChat – thanks to its enormous user base, as well as the promise of privacy and anonymity – was set to become the ideal venue for the sale of fake goods. So a decision was taken to establish a presence on it by opening an official account and registering an anti-counterfeiting programme, a process which took about a month. However, in order to activate the programme, the company first had to ensure that all its Chinese business and trademark registrations were in place (without these, service providers cannot act on a rights holder’s behalf). A key benefit of this programme is that rights holders then have access to any evidence of infringement.

Once all the formal requirements had been met, users were able to report suspected infringements to WeChat. Brand X’s online enforcement partner then analysed these reports. Once an infringement was confirmed, it ensured that the offending content was taken down. To date, its success rate is just shy of 100%. If the problem persists, WeChat closes the offending account, in accordance with its policy.

Key lessons from Brand X’s experience include the following: 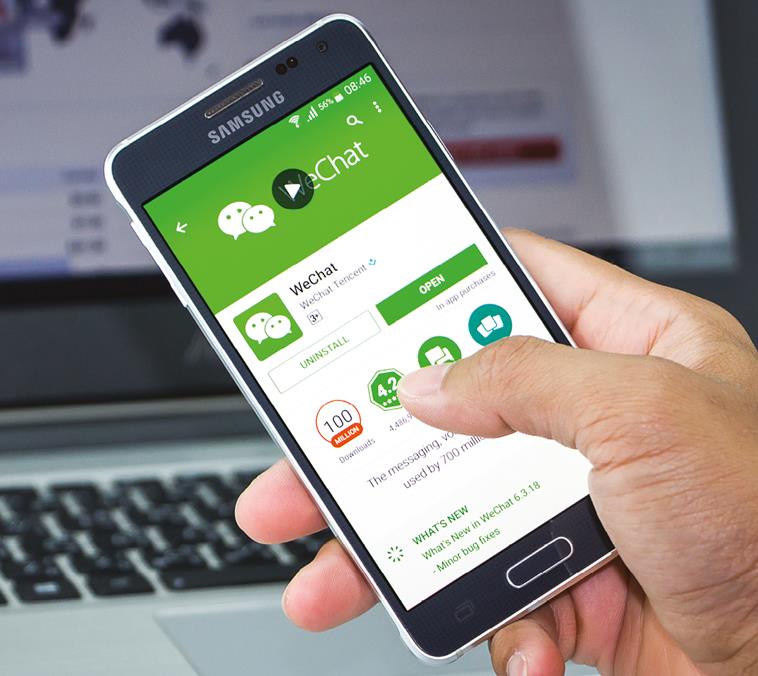 As China’s most popular messaging app, WeChat presents major challenges to rights holders – but a good relationship with its legal team can make the task easier to bear

A tough but not hopeless fight

As the case of Brand X shows, there are no shortcuts when it comes to protecting your rights (and revenues) in the new frontier of mobile messaging apps. As soon as one user is blocked, another peddling fake goods will emerge. Rights holders, their partners and app providers must continue to find new ways to fight back.

One possible measure that is under discussion is for social media providers to voluntarily employ a system for brand owners to register and verify the authenticity of products offered for sale through the app. This might require a public listing for every product and service sold by users and include a strong notice and takedown system to allow providers to respond quickly to trademark and copyright infringement complaints.

Another idea is that brand owners could monitor a sample of transactions with the help of secret shoppers.

One factor which has provided cause for cautious optimism is that owners of messaging apps are better placed to monitor counterfeiting and infringing behaviour, as they can access all the transactions that take place using their app.

The evolution of messaging apps into e-commerce platforms may still be in its infancy, but the time to think carefully about your strategy is now.