In Établissement Amra v Office for Harmonisation in the Internal Market (OHIM) (Case T-390/14, November 26 2015), the General Court has upheld a decision of the Second Board of Appeal of OHIM in registration proceedings involving a three-dimensional mark (3D) consisting of two arching springs separated by elastic plastic straps. 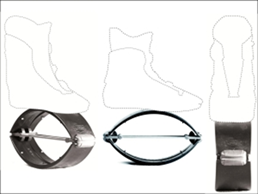 On April 10 2013 the applicant, Établissement Amra, filed a Community trademark application for the registration of the mark depicted above for "gymnastic and sporting articles not included in other classes" in Class 28 of the Nice Classification. The description of the mark specified that the figurative mark KANGOO JUMPS is placed on the upper and the lower spring level, while the letters 'KJ' and 'XR' are placed at the end of both straps.

The application was rejected on April 19 2013 on the grounds that the mark lacked distinctive character. The Second Board of Appeal of OHIM dismissed the appeal brought by Établissement Amra, holding that the mark as a whole was the sum of various technical, functional and ornamental elements, and was therefore not capable of indicating the origin of the goods in question. The applicant appealed this decision to the General Court.

Before the General Court, Établissement Amra argued that a minimum degree of distinctiveness is sufficient for the registration of a mark. According to the court, the criteria to be applied when assessing the distinctiveness of 3D marks are the same as those applicable to word marks and figurative marks. Additionally, the perception of the average consumer is relevant, but cannot be said to be on the same level as in relation to other marks. Consumers are not accustomed to making assumptions about the origin of goods based on their shape in the absence of any graphic or word elements. The court therefore held that the Board of Appeal had conducted a detailed analysis and taken into account the various elements of the mark before concluding that the mark, taken as a whole, was devoid of distinctive character.

In its second plea, the applicant argued that the relevant public, which consisted of consumers of gymnastic and sporting equipment, is used to differentiating the origin of various articles by somewhat unusual trademarks. As an example, the applicant referred to the shape of the upper part of a treadmill. The applicant, however, did not challenge the finding of the Board of Appeal that the relevant public consisted of an average, reasonably well-informed and circumspect European consumer, and not a consumer who practices sports particularly intensively or at a professional level. The applicant had not provided any evidence of its claim or established that the position of the rebound device under the boots was unusual and thus capable of indicating the origin of the product to the consumers.

Furthermore, the court held that the applicant's mark did not differ significantly from the shapes commonly used in trade. It was simply a variation of the basic shapes of the goods concerned. The expression 'kangoo jumps' and letters 'KJ' and 'XR' were held to be very minor and insignificant elements that did not bring any distinctive character to the mark as a whole.

The General Court dismissed the action and ordered Établissement Amra to pay the costs.