New research conducted by World Trademark Review reveals that, for the second year in a row, Manchester United has the most registered trademarks of any club in the English Premier League – although current champions Chelsea are not far behind. However, one leading industry commentator has warned that most clubs do not make effective use of their lucrative brand assets.

Our research follows the release of Brand Finance’s Football 50 2017 report. That study ranks football clubs from around the world solely by the value of their brands. It uses the ‘Royalty Relief’ approach to brand valuation, wherein it estimates the likely future sales that are attributable to a football club’s brand, as well as calculating a royalty rate that would be charged for the use of the brand by a commercial partner.

For the third year in a row, Manchester United was ranked as the most valuable football brand in the world, with a brand value of over £1.3 billion. Despite their disappointing 6th place finish in the English Premier League last season (albeit alongside two cup victories), the report notes that the club is top in terms of brand value “partly [due to] the enduring halo effect from the good times under Alex Ferguson” but also because of its “commercial nous and ability to convert its success into lucrative deals across dozens of industry sectors and national territories” (including, most notoriously, a recently announced co-branded tractor).

The top 10 most valuable football club brands in the world, according to the Football 50 report, are:

Many of these brand values are staggering, with each in the top 10 worth over £500 million. Nonetheless, Brand Finance CEO David Haigh warned that the full potential of many football brands is not being exploited. “Huge investments are [being] made in the design, launch, re-launch and ongoing promotion of football brands,” he states. “As we have established, this makes sense. Unfortunately, most clubs fail to go beyond that, missing huge opportunities to effectively make use of what are often their most important assets.”

After the release of last year’s Football 50 report, we wanted to get a deeper understanding of how these clubs are protecting their brand assets through the use of registered trademark protection. So we took a look at the trademark portfolios of all 20 English Premier League clubs, as well as the 10 most valuable non-UK clubs. It revealed that Spanish club Barcelona and Italian club AC Milan owned the most marks of clubs in Europe, while surprise Premier League champions Leicester City, who were battling relegation just a year before, only had eight filed or registered trademarks in total. At the time, a club spokesperson told us that “IP is one of our focuses going forward”, and that the legal team was planning to expand the Leicester City brand internationally to capitalise on the club’s newfound success.

A year on, we are able to gauge the extent of that international expansion. According to our latest analysis, the portfolio managed by club – which ended up finishing this season in 12th place –remains relatively small, with just five more marks filed in the past year. By way of comparison, all three newly-promoted clubs (Newcastle, Brighton and Huddersfield) have a more substantial trademark portfolio.

Meanwhile, Barcelona still has the largest trademark portfolio of any football club globally, with almost 300 filed or registered trademarks in total. Not far behind is the most valuable brand Manchester United – which filed 69 new applications in the previous 12 months – with a total of 271 marks, making it the highest in terms of Premier League clubs. Previous runners-up AC Milan has 22 fewer filings than a year ago, and slip to fifth place overall.

We also looked at the portfolio of some of the most valuable football players, as ranked by the CIES Football Observatory. It shows that Barcelona ace Neymar – who is ranked as the most valuable player at £217m – has the largest trademark portfolio, with 47 in total (including for his ‘NJR’ logo). Teammate Lionel Messi has a 33-strong portfolio, while strike partner Luis Suarez doesn’t appear to have any trademarks. Paul Pogba, who commanded the highest transfer fee ever when he moved from Juventus to Manchester United last summer, has eight filed or registered trademarks, including – unusually – for his signature.

Ultimately, football clubs have brands worth significant sums, but they must ensure their trademark portfolios reflect that value. This may be where the legal community can step in: by offering IP advice to clubs to ensure they have an effective brand growth strategy for the future, law firms could attain new clients while ensuring clubs can capitalise on the “huge opportunities” that Haigh warned are currently being missed. 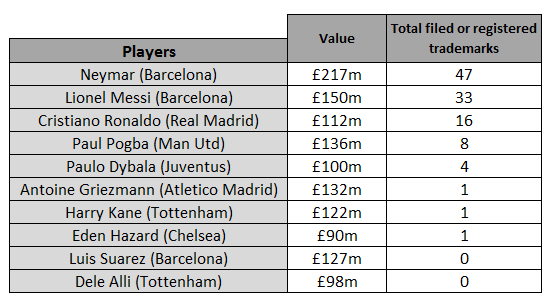 Source: TMView, 13 June 2017. 'Total' refers to TMView total of the 57 IP offices it records; 'International' refers to WIPO Madrid System trademarks; national marks refers to trademarks filed at the IP Office in the home country of the listed football club. Figures are based on filed or registered trademarks, and on key applicant name only.