Print article
European Union
Legal updates: case law analysis and intelligence
In Louis Vuitton Malletier v Office for Harmonisation in the Internal Market (OHIM) (Case T-237/10, December 14 2011), the General Court has partially annulled a decision of the First Board of Appeal of OHIM in which the latter had declared that Louis Vuitton Malletier's 'locking device' mark was invalid. 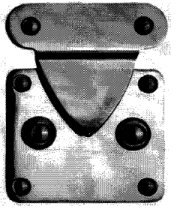 The invalidity action was rejected by the Cancellation Division of OHIM, but the First Board of Appeal held that the trademark was devoid of any distinctive character with regard to the goods for which the trademark was registered in Classes 9,14 and 18 of the Nice Classification. Louis Vuitton had not filed proof of acquired distinctiveness.

The General Court partially annulled the decision of the Board of Appeal.

First, the General Court pointed out that the case-law regarding three-dimensional trademarks is applicable to a figurative trademark consisting of the shape of part of the product concerned, since such a trademark is likewise not independent of the appearance of the product it designates. The question was whether the contested trademark departed significantly from the norm or customs and thereby fulfilled its essential function of indicating origin - in short: whether it had distinctive character.

The General Court held that there is no conceptual link between a locking device and an object which is not likely to include a locking device. Therefore, the trademark was distinctive for goods such as "nutcrackers in precious metals, their alloys or coated therewith, candlesticks in precious metals" in Class 14, as well as "leather and imitations of leather" in Class 18. "Spectacle cases" may include a locking device, which implies that the mark representing such an object will be perceived by the relevant public as a representation of part of the product covered by the mark. Therefore, the mark must be considered to be devoid of any distinctive character with regard to spectacle cases and all other goods in Class 9.

With regard to "jewellery", "horological goods" and "umbrellas", the General Court ruled as follows:

"Although it is possible that a locking device identical or similar to that of the contested mark might be adapted for use on the goods (…), the fact remains that such a device departs significantly from the norms and customs of the sector and, consequently and contrary to what the Board of Appeal found (…), possesses the minimum degree of distinctive character required to justify the registration of the contested mark in respect of those goods."

However, according to the General Court, the public is used to perceiving locking devices as mechanisms and, therefore, primarily as functional items. Since the elements of which the locking device is made up do not depart significantly from the shapes of clasp locks already existing on the market in a way which could render the clasp lock distinctive, the trademark was invalid for the rest of the goods covered by the registration. An important issue in this regard is that Louis Vuitton had not adduced evidence of the acquisition by the contested trademark of distinctive character in all countries of the European Union, which is required because of the unitary character of the CTM.