In Louis Vuitton Malletier v Office for Harmonisation in the Internal Market (OHIM) (Cases T-359/12 and T-360/12), the General Court (Second Chamber) has dismissed Louis Vuitton's action against a decision of the First Board of Appeal of OHIM declaring that the trademarks at issue were invalid on the grounds that they lacked distinctive character and had not acquired secondary meaning through use in the European Union.

Louis Vuitton is the owner of the figurative Community trademarks Nos 370445 and 6587851 (depicted below) for goods in Class 18 of the Nice Classification. The marks were registered in 1998 and 2008, respectively. 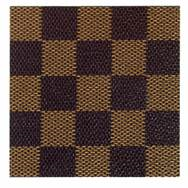 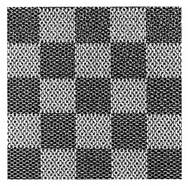 On September 28 2009 the intervener (Nanu-Nana Handelsgesellschaft mbH für Geschenkartikel & Co KG) filed an application for a declaration of invalidity of the marks in connection with all the goods covered by the marks under Article 52(1)(a) and Article 7(1)(b), (c), (d), (e)(iii) and (f) of the Community Trademark Regulation (207/2009), on the grounds, among others, that the marks lacked distinctive character and that they consisted of signs which serve in trade to designate the kind and other characteristics of the goods.

The Cancellation Division of OHIM upheld the application for a declaration of invalidity and the First Board of Appeal of OHIM confirmed, stating that:

“in essence […] the chequerboard pattern, as represented in the contested trademark[s], was a basic and banal feature composed of very simple elements and that it was well-known that that feature had been commonly used with a decorative purpose in relation to various goods, including those falling within Class 18”.

It was also said that:

“in the absence of features capable of distinguishing [them] from other representations of chequerboards, [the trademarks were] not capable of fulfilling the essential ‘identification’ or ‘origin’ function of a trademark”.

Louis Vuitton claimed, among other things, that the General Court should annul the decisions of the Board of Appeal.

First, the court highlighted that an absolute ground for refusal is subject to interpretation in accordance with the “general interest” underlying it. In other words, the “general interest” is indissociable from the function of a trademark, which is to guarantee the identification of the origin of products and to enable consumers, “without any possibility of confusion”, to distinguish those products from those of others.

In this respect, the court stated that:

“average consumers are not in the habit of making assumptions about the origin of products on the basis of their shape or the shape of their packaging in the absence of any graphic or word element and it could therefore prove more difficult to establish distinctiveness in relation to such a three-dimensional mark than in relation to a word or figurative mark”. (Paragraph 17)

The main issue which the General Court had to address was whether the pattern depicted in the trademarks differed significantly from the norm or customs and, most importantly, whether the pattern allowed consumers to identify Louis Vuitton as the source of the goods.

In this regard, the court stated that:

“the chequerboard pattern is a basic and commonplace figurative pattern, since it is composed of a regular succession of squares of the same size which are differentiated by alternating different colours... The pattern thus does not contain any notable variation in relation to the conventional representation of chequerboards and is the same as the traditional form of such a pattern. Even applied to goods such as those falling within Class 18, the pattern in question does not differ from the norm or customs of the sector inasmuch as such goods are generally covered with fabrics of different kinds, and the chequerboard pattern, due to its great simplicity, might constitute precisely one of those patterns”. (Paragraph 37)

The second issue considered by the General Court was whether the trademarks had acquired secondary meaning through continuous use in the European Union.

The court found that:

As a result, as Louis Vuitton had failed to prove that the contested marks had acquired distinctive character through use in Denmark, Portugal, Finland and Sweden, the General Court dismissed the action in its entirety. Therefore, the trademarks at issue are invalid.

Filing and obtaining a registration for signs whose distinctive character is questionable does not necessarily mean that their owners have secured a monopoly over those signs. The threshold requirements highlighted by the General Court demonstrate how difficult it is to show that a sign has acquired secondary meaning.