Line wave design for clothing found to be merely ornamental

In In re Lululemon Athletica Canada Inc (Serial No 77/455,710, January 11 2013), the Trademark Trial and Appeal Board (TTAB) has affirmed the examining attorney’s refusal to register a line wave design (shown below) for hooded sweat shirts, jackets and coats, holding that the design was barred from registration as it would be perceived by consumers as merely ornamental as applied to the goods being offered. 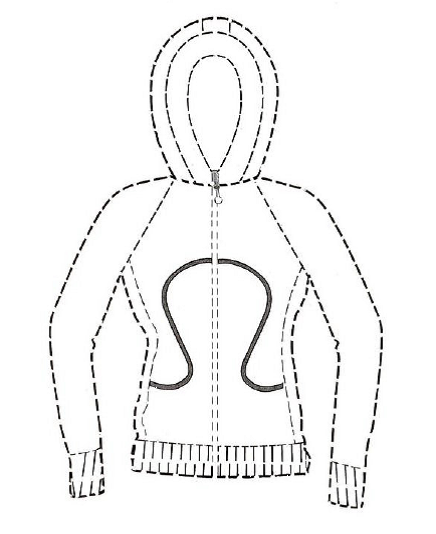 Lululemon Athletica Canada Inc filed a use-based application to register the design on the Principal Register claiming a priority date under Section 44(d) of the Trademark Act, 15 USC §1126. It described the design as “a single line in a wave design that is applied to the front of the garment. The dotted lies [sic] showing the outline of a garment does not form part of the mark, but is used only to show placement of the mark”. The examining attorney refused registration on the ground that the design was merely ornamental. After receiving the final refusal, the applicant amended the filing basis to rely on Sections 1(b) (intent to use) and 44(e) of the Trademark Act, 15 USC §1051(b) and §1126. The applicant did not amend the application to claim acquired distinctiveness.

The TTAB first addressed the issue of whether the design was merely ornamental by analysing if it was inherently distinctive. The TTAB noted that the relevant factors in considering inherent distinctiveness include:

The examining attorney had argued that, due to the large size, consumers would not perceive the wave design as a mark, and submitted evidence of third-party registrations for large marks appearing on clothing that were either registered on the Supplemental Register or registered based on acquired distinctiveness. The TTAB found that, in considering the commercial impression of marks placed on clothing, the size of the mark is one consideration along with others, and the registrability of each mark must be determined on a case-by-case basis. The TTAB rejected the examining attorney’s contention that such marks are not inherently distinctive merely due to the large size. The TTAB noted that it was no longer a practice of the clothing industry to limit logos to small sizes in discrete areas rather than to have them “emblazoned” across a garment. The TTAB determined, however, that because the line wave design was simple, not highly stylised, and resembled “piping” (defined as a decorative line across a garment), it created a commercial impression of ornamentation.

The TTAB further noted that not every ornamental design will be considered merely ornamental if it is also recognisable as a trademark by inherently conveying to the purchasing public the “secondary source” of the goods. The TTAB distinguished the “secondary source” from the “secondary meaning” by explaining that, in a context of an ornamentation refusal, the former means that the use of the design or words would be perceived by the consumer as an indicator of source due to the owner’s prior use or registration of the mark for other goods or services.

In this regard, the applicant submitted evidence illustrating previous use of the design on “related” goods and services. The applicant’s evidence included images of such use on storefront, luggage, shopping bags and a gift card, among other things. The examining attorney argued that these other uses and registrations were not for the same mark. The TTAB agreed with the examining attorney by finding “that the evidence submitted by applicant of… a highly stylised wave design confined in and highlighted by a contrasting-hued circle” with the sides of the wave being thicker and closer together (the design is shown below) is different from the design at issue. In addition, the TTAB found that the applicant’s prior design was not of uniform thickness, whereas the design at issue was uniformly a thin line throughout. Consequently, the TTAB found that evidence of past uses and registration could not be used by the applicant to show that the design served as a secondary source for the goods because such evidence did not show use of the same mark.

The TTAB further refused the applicant’s contention that the ornamentation refusal was premature in an intent-to-use application by noting that such refusal may be made if a well-defined drawing is ornamental on its face.

The TTAB did not address the issue of potential acquired distinctiveness of the design.