New data has revealed that technology giant LG was the most prolific filer of trademark applications at the US Patent and Trademark Office (USPTO) in 2016, with entertainment conglomerates CBS, Time Warner and Disney just behind. Meanwhile, Apple – which had the most trademarks of any major tech company a few years ago – filed less than 70 marks last year, leading one industry commentator to ask: “Hey Apple, why aren’t you filing trademark applications?”

In the latest issue of World Trademark Review, we took an in-depth look into the operations of the USPTO in the past 12-18 months. Based on data provided by Corsearch, we listed the top 50 corporate and law firm trademark filers in 2016, as well as the top filers by country and US state of origin. We also polled the top 50 private practice filers to gain further insight into user sentiment towards the office and garner predictions on the future of the USPTO under the Trump administration.

The list of top corporate trademark filers highlighted a number of trends and, in some cases, surprises. For the second year in a row, the list is led by South Korean electronics giant LG, although it filed 200 applications less than the previous year. Media companies CBS, Time Warner and Walt Disney are next on the list, and they also filed less applications in 2016. The most significant rise in applications amongst those in the top 20 (see the full list below) comes from the Government of the United States, which went from filing 37 applications in 2015 to over 180 last year. However, Corsearch’s vice president of global sales & strategic partnerships Stephen Stolfi told us this is not due to the election. “This was a surprise and it had nothing to do with the Obama administration ending,” Stolfi explains. “The fillings were done mostly by the US Department of the Navy and the US Marine Corps, and it appears these branches of the US military were catching up on their trademark filings, which had not been done in previous years. So they were doing some housekeeping.”

Top 20 corporate trademark filers at the USPTO in 2016:

The big surprise, Stolfi says, is the absence of Apple in the top 20 (it now sits in 84th place overall). “The absence of Apple was notable given that they have been in the top 50 for the past five years," he notes. "They filed [significantly] less trademarks in 2016 than they had in previous years."

In fact, a look at annual filings by the world’s leading technology brands (see below; click to view graph full-size) illustrates the steep decline of Apple filings since its peak in 2011. 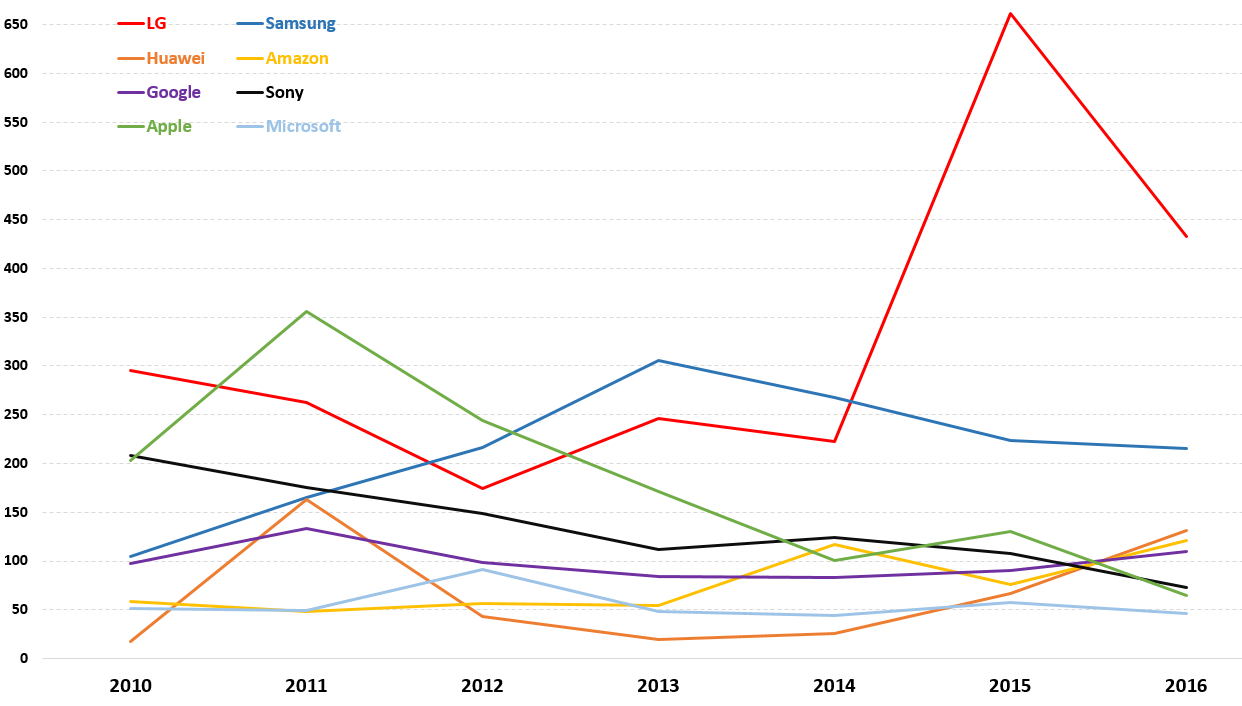 This drop in filings by Apple has been noticed by others in the trademark community. Wesley D. Anderson, an associate at Winthrop & Weinstine, wrote a post on DuetsBlog last week about “the missing Apple trademarks” as he had noticed a lack of federal trademark protection for two of its new offerings, the HomePod speaker and new operating system High Sierra. “A search of the TESS database for HOMEPOD finds only two dead applications from 2009 and 2008, and a HIGH SIERRA search produces 71 matches (including, naturally, HIGH SIERRA VAPES), but no applications owned by Apple,” he noted. “Far be it from me to criticise a company hoarding over $250 billion in cash reserves – but, hey Apple, why aren’t you filing trademark applications?”

It appears Apple filed an international application for HOMEPOD last week. However, the company has been releasing less new products in recent years (the HomePod was its first new product line since 2015), so the reason for the fall in trademark applications may be simple – less new brands are being created, so less trademarks are being filed. The same could be said of other companies in the sector (LG, Sony and Microsoft filed significantly less marks last year too). But in the fiercely competitive innovation industry, the data reveals interesting insights into those relying on already established product brands and those creating new ones.